Short description: Real number that is strictly less than zero 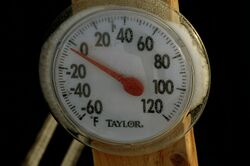 This thermometer is indicating a negative Fahrenheit temperature (−4 °F).

Negative numbers are usually written with a minus sign in front. For example, −3 represents a negative quantity with a magnitude of three, and is pronounced "minus three" or "negative three". To help tell the difference between a subtraction operation and a negative number, occasionally the negative sign is placed slightly higher than the minus sign (as a superscript). Conversely, a number that is greater than zero is called positive; zero is usually (but not always) thought of as neither positive nor negative.[2] The positivity of a number may be emphasized by placing a plus sign before it, e.g. +3. In general, the negativity or positivity of a number is referred to as its sign.

In bookkeeping, amounts owed are often represented by red numbers, or a number in parentheses, as an alternative notation to represent negative numbers.

The relationship between negative numbers, positive numbers, and zero is often expressed in the form of a number line:

Note that a negative number with greater magnitude is considered less. For example, even though (positive) 8 is greater than (positive) 5, written

negative 8 is considered to be less than negative 5:

(Because, for example, if you have £−8, a debt of £8, you would have less after adding, say £10, to it than if you have £−5.) It follows that any negative number is less than any positive number, so

In the context of negative numbers, a number that is greater than zero is referred to as positive. Thus every real number other than zero is either positive or negative, while zero itself is not considered to have a sign. Positive numbers are sometimes written with a plus sign in front, e.g. +3 denotes a positive three.

As the result of subtraction

Negative numbers can be thought of as resulting from the subtraction of a larger number from a smaller. For example, negative three is the result of subtracting three from zero:

In general, the subtraction of a larger number from a smaller yields a negative result, with the magnitude of the result being the difference between the two numbers. For example, 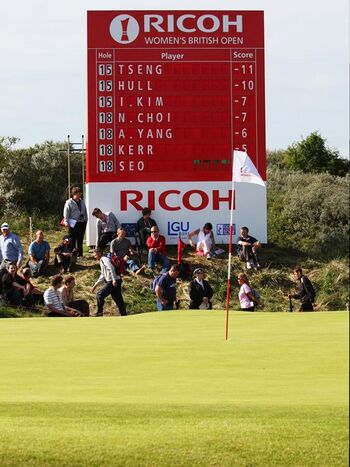 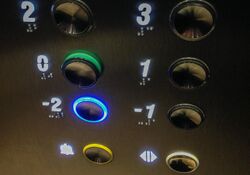 Negative storey numbers in an elevator.

The ambiguity of the "−" symbol does not generally lead to ambiguity in arithmetical expressions, because the order of operations makes only one interpretation or the other possible for each "−". However, it can lead to confusion and be difficult for a person to understand an expression when operator symbols appear adjacent to one another. A solution can be to parenthesize the unary "−" along with its operand.

For example, the expression 7 + −5 may be clearer if written 7 + (−5) (even though they mean exactly the same thing formally). The subtraction expression 7 – 5 is a different expression that doesn't represent the same operations, but it evaluates to the same result. 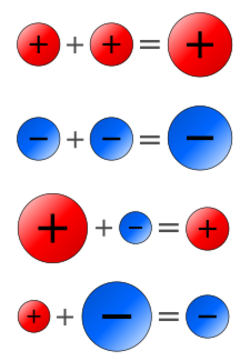 A visual representation of the addition of positive and negative numbers. Larger balls represent numbers with greater magnitude.

The idea is that two debts can be combined into a single debt of greater magnitude.

In the first example, a credit of 8 is combined with a debt of 3, which yields a total credit of 5. If the negative number has greater magnitude, then the result is negative:

Here the credit is less than the debt, so the net result is a debt.

As discussed above, it is possible for the subtraction of two non-negative numbers to yield a negative answer:

In general, subtraction of a positive number yields the same result as the addition of a negative number of equal magnitude. Thus

On the other hand, subtracting a negative number yields the same result as the addition a positive number of equal magnitude. (The idea is that losing a debt is the same thing as gaining a credit.) Thus

The reason behind the first example is simple: adding three −2's together yields −6:

The convention that a product of two negative numbers is positive is also necessary for multiplication to follow the distributive law. In this case, we know that

These rules lead to another (equivalent) rule—the sign of any product a × b depends on the sign of a as follows:

The justification for why the product of two negative numbers is a positive number can be observed in the analysis of complex numbers.

The sign rules for division are the same as for multiplication. For example,

That is, the negation of a positive number is the additive inverse of the number.

Using algebra, we may write this principle as an algebraic identity:

This identity holds for any positive number x. It can be made to hold for all real numbers by extending the definition of negation to include zero and negative numbers. Specifically:

We define an equivalence relation ~ upon these pairs with the following rule:

We can also define a total order on Z by writing

For a long time, understanding of negative numbers was delayed by the impossibility of having a negative-number amount of a physical object, for example "minus-three apples", and negative solutions to problems were considered "false".

In Hellenistic Egypt, the Greek mathematician Diophantus in the 3rd century AD referred to an equation that was equivalent to [math]\displaystyle{ 4x + 20 = 4 }[/math] (which has a negative solution) in Arithmetica, saying that the equation was absurd.[26] For this reason Greek geometers were able to solve geometrically all forms of the quadratic equation which give positive roots; while they could take no account of others.[27]

Negative numbers appear for the first time in history in the Nine Chapters on the Mathematical Art (九章算術, Jiǔ zhāng suàn-shù), which in its present form dates from the period of the Han Dynasty (202 BC – 220 AD), but may well contain much older material.[3] The mathematician Liu Hui (c. 3rd century) established rules for the addition and subtraction of negative numbers. The historian Jean-Claude Martzloff theorized that the importance of duality in Chinese natural philosophy made it easier for the Chinese to accept the idea of negative numbers.[4] The Chinese were able to solve simultaneous equations involving negative numbers. The Nine Chapters used red counting rods to denote positive coefficients and black rods for negative.[4][28] This system is the exact opposite of contemporary printing of positive and negative numbers in the fields of banking, accounting, and commerce, wherein red numbers denote negative values and black numbers signify positive values. Liu Hui writes:

The ancient Indian Bakhshali Manuscript carried out calculations with negative numbers, using "+" as a negative sign.[29] The date of the manuscript is uncertain. LV Gurjar dates it no later than the 4th century,[30] Hoernle dates it between the third and fourth centuries, Ayyangar and Pingree dates it to the 8th or 9th centuries,[31] and George Gheverghese Joseph dates it to about AD 400 and no later than the early 7th century,[32]

In the 9th century, Islamic mathematicians were familiar with negative numbers from the works of Indian mathematicians, but the recognition and use of negative numbers during this period remained timid.[5] Al-Khwarizmi in his Al-jabr wa'l-muqabala (from which the word "algebra" derives) did not use negative numbers or negative coefficients.[5] But within fifty years, Abu Kamil illustrated the rules of signs for expanding the multiplication [math]\displaystyle{ (a \pm b)(c \pm d) }[/math],[35] and al-Karaji wrote in his al-Fakhrī that "negative quantities must be counted as terms".[5] In the 10th century, Abū al-Wafā' al-Būzjānī considered debts as negative numbers in A Book on What Is Necessary from the Science of Arithmetic for Scribes and Businessmen.[35]

By the 12th century, al-Karaji's successors were to state the general rules of signs and use them to solve polynomial divisions.[5] As al-Samaw'al writes:

In the 12th century in India, Bhāskara II gave negative roots for quadratic equations but rejected them because they were inappropriate in the context of the problem. He stated that a negative value is "in this case not to be taken, for it is inadequate; people do not approve of negative roots."

Fibonacci allowed negative solutions in financial problems where they could be interpreted as debits (chapter 13 of Liber Abaci, 1202 AD) and later as losses (in Fibonacci's work Flos').

In the 15th century, Nicolas Chuquet, a Frenchman, used negative numbers as exponents[36] but referred to them as "absurd numbers".[37]

Michael Stifel dealt with negative numbers in his 1544 AD Arithmetica Integra, where he also called them numeri absurdi (absurd numbers).

In 1545, Gerolamo Cardano, in his Ars Magna, provided the first satisfactory treatment of negative numbers in Europe.[26] He did not allow negative numbers in his consideration of cubic equations, so he had to treat, for example, [math]\displaystyle{ x^3 + a x = b }[/math] separately from [math]\displaystyle{ x^3 = a x + b }[/math] (with [math]\displaystyle{ a, b \gt 0 }[/math] in both cases). In all, Cardano was driven to the study of thirteen types of cubic equations, each with all negative terms moved to the other side of the = sign to make them positive. (Cardano also dealt with complex numbers, but understandably liked them even less.)

In 1797 AD, Carl Friedrich Gauss published a proof of the fundamental theorem of algebra but expressed his doubts at the time about "the true metaphysics of the square root of −1".[39]

However, European mathematicians, for the most part, resisted the concept of negative numbers until the middle of the 19th century.[40] In the 18th century it was common practice to ignore any negative results derived from equations, on the assumption that they were meaningless.[41] In 1759 AD, the English mathematician Francis Maseres wrote that negative numbers "darken the very whole doctrines of the equations and make dark of the things which are in their nature excessively obvious and simple". He came to the conclusion that negative numbers were nonsensical.[42]