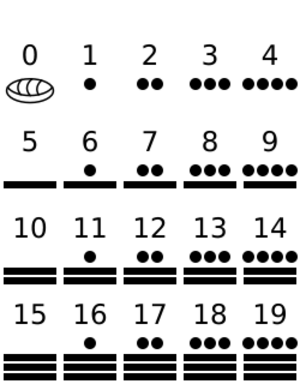 The Maya numerals are a base-20 system.

In a vigesimal place system, twenty individual numerals (or digit symbols) are used, ten more than in the usual decimal system. One modern method of finding the extra needed symbols is to write ten as the letter A20 (the 20 means base 20), to write nineteen as J20, and the numbers between with the corresponding letters of the alphabet. This is similar to the common computer-science practice of writing hexadecimal numerals over 9 with the letters "A–F". Another less common method skips over the letter "I", in order to avoid confusion between I20 as eighteen and one, so that the number eighteen is written as J20, and nineteen is written as K20. The number twenty is written as 1020.

According to this notation:

In the rest of this article below, numbers are expressed in decimal notation, unless specified otherwise. For example, 10 means ten, 20 means twenty. Numbers in vigesimal notation use the convention that I means eighteen and J means nineteen.

As 20 is divisible by two and five and is adjacent to 21, the product of three and seven, thus covering the first four prime numbers, many vigesimal fractions have simple representations, whether terminating or recurring (although thirds are more complicated than in decimal, repeating two digits instead of one). In decimal, dividing by three twice (ninths) only gives one digit periods (1/9 = 0.1111.... for instance) because 9 is the number below ten. 21, however, the number adjacent to 20 that is divisible by 3, is not divisible by 9. Ninths in vigesimal have six-digit periods. As 20 has the same prime factors as 10 (two and five), a fraction will terminate in decimal if and only if it terminates in vigesimal.

The prime factorization of twenty is 22 × 5, so it is not a perfect power. However, its squarefree part, 5, is congruent to 1 (mod 4). Thus, according to Artin's conjecture on primitive roots, vigesimal has infinitely many cyclic primes, but the fraction of primes that are cyclic is not necessarily ~37.395%. An UnrealScript program that computes the lengths of recurring periods of various fractions in a given set of bases found that, of the first 15,456 primes, ~39.344% are cyclic in vigesimal.

In many European languages, 20 is used as a base, at least with respect to the linguistic structure of the names of certain numbers (though a thoroughgoing consistent vigesimal system, based on the powers 20, 400, 8000 etc., is not generally used).

Vigesimal systems are common in Africa, for example in Yoruba.

There is some evidence of base-20 usage in the Māori language of New Zealand as seen in the terms Te Hokowhitu a Tu referring to a war party (literally "the seven 20s of Tu") and Tama-hokotahi, referring to a great warrior ("the one man equal to 20").

Vigesimal is derived from the Latin adjective vicesimus.

Powers of twenty in Yucatec Maya and Nahuatl

Counting in units of twenty

This table shows the Maya numerals and the number names in Yucatec Maya, Nahuatl in modern orthography and in Classical Nahuatl.