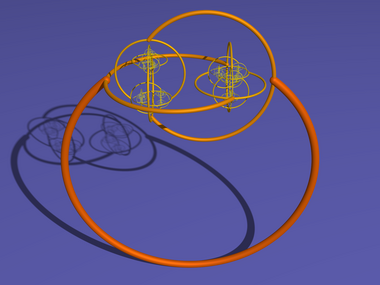 The Alexander horned sphere is a pathological object in topology discovered by J. W. Alexander (1924). 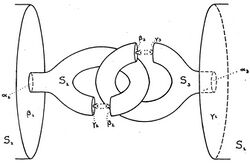 Diagram of the first few iterative steps in the construction of Alexander's horned sphere, from Alexander's original 1924 paper

The Alexander horned sphere is the particular embedding of a sphere in 3-dimensional Euclidean space obtained by the following construction, starting with a standard torus:[1]

By considering only the points of the tori that are not removed at some stage, an embedding results in the sphere with a Cantor set removed. This embedding extends to the whole sphere, since points approaching two different points of the Cantor set will be at least a fixed distance apart in the construction.

The horned sphere, together with its inside, is a topological 3-ball, the Alexander horned ball, and so is simply connected; i.e., every loop can be shrunk to a point while staying inside. The exterior is not simply connected, unlike the exterior of the usual round sphere; a loop linking a torus in the above construction cannot be shrunk to a point without touching the horned sphere. This shows that the Jordan–Schönflies theorem does not hold in three dimensions, as Alexander had originally thought. Alexander also proved that the theorem does hold in three dimensions for piecewise linear/smooth embeddings. This is one of the earliest examples where the need for distinction between the categories of topological manifolds, differentiable manifolds, and piecewise linear manifolds became apparent.

Other substantially different constructions exist for constructing such "wild" spheres. Another example, also found by Alexander, is Antoine's horned sphere, which is based on Antoine's necklace, a pathological embedding of the Cantor set into the 3-sphere.