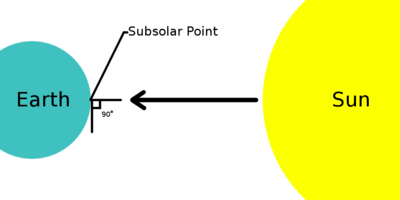 The subsolar point on a planet is the point at which its sun is perceived to be directly overhead (at the zenith);[1] that is, where the sun's rays strike the planet exactly perpendicular to its surface. It can also mean the point closest to the sun on an astronomical object, even though the sun might not be visible.

To an observer on a planet with an orientation and rotation similar to those of Earth, the subsolar point will appear to move westward, completing one circuit around the globe each day, approximately moving along the equator. However, it will also move north and south between the tropics over the course of a year, so it is spiraling like a helix.

When the point passes through Hawaii, which is the only United States in which this happens, the event is known as Lahaina Noon.[2]