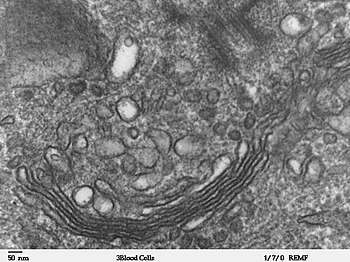 Micrograph of Golgi apparatus, visible as a stack of semicircular black rings near the bottom. Numerous circular vesicles can be seen in proximity to the organelle.

The Golgi apparatus, also known as the Golgi complex, Golgi body, or simply the Golgi, is an organelle found in most eukaryotic cells.[1] Part of the endomembrane system in the cytoplasm, it packages proteins into membrane-bound vesicles inside the cell before the vesicles are sent to their destination. It resides at the intersection of the secretory, lysosomal, and endocytic pathways. It is of particular importance in processing proteins for secretion, containing a set of glycosylation enzymes that attach various sugar monomers to proteins as the proteins move through the apparatus.

It was identified in 1897 by the Italian scientist Camillo Golgi and was named after him in 1898.[2]

Owing to its large size and distinctive structure, the Golgi apparatus was one of the first organelles to be discovered and observed in detail. It was discovered in 1898 by Italian physician Camillo Golgi during an investigation of the nervous system.[3][2] After first observing it under his microscope, he termed the structure as apparato reticolare interno ("internal reticular apparatus"). Some doubted the discovery at first, arguing that the appearance of the structure was merely an optical illusion created by the observation technique used by Golgi. With the development of modern microscopes in the 20th century, the discovery was confirmed.[4] Early references to the Golgi apparatus referred to it by various names including the "Golgi–Holmgren apparatus", "Golgi–Holmgren ducts", and "Golgi–Kopsch apparatus".[2] The term "Golgi apparatus" was used in 1910 and first appeared in the scientific literature in 1913, while "Golgi complex" was introduced in 1956.[2] 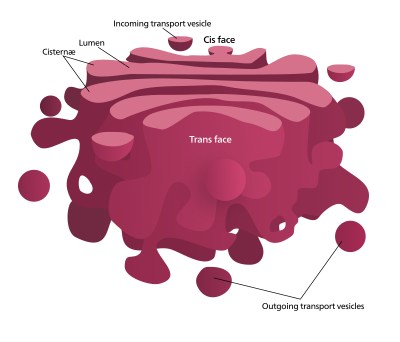 Diagram of a single "stack" of Golgi

In most eukaryotes, the Golgi apparatus is made up of a series of compartments and is a collection of fused, flattened membrane-enclosed disks known as cisternae (singular: cisterna, also called "dictyosomes"), originating from vesicular clusters that bud off the endoplasmic reticulum. A mammalian cell typically contains 40 to 100 stacks of cisternae.[8] Between four and eight cisternae are usually present in a stack; however, in some protists as many as sixty cisternae have been observed.[4] This collection of cisternae is broken down into cis, medial, and trans compartments, making up two main networks: the cis Golgi network (CGN) and the trans Golgi network (TGN). The CGN is the first cisternal structure, and the TGN is the final, from which proteins are packaged into vesicles destined to lysosomes, secretory vesicles, or the cell surface. The TGN is usually positioned adjacent to the stack, but can also be separate from it. The TGN may act as an early endosome in yeast and plants.[6][9]

There are structural and organizational differences in the Golgi apparatus among eukaryotes. In some yeasts, Golgi stacking is not observed. Pichia pastoris does have stacked Golgi, while Saccharomyces cerevisiae does not.[6] In plants, the individual stacks of the Golgi apparatus seem to operate independently.[6]

The Golgi apparatus tends to be larger and more numerous in cells that synthesize and secrete large amounts of substances; for example, the antibody-secreting plasma B cells of the immune system have prominent Golgi complexes.

In all eukaryotes, each cisternal stack has a cis entry face and a trans exit face. These faces are characterized by unique morphology and biochemistry.[10] Within individual stacks are assortments of enzymes responsible for selectively modifying protein cargo. These modifications influence the fate of the protein. The compartmentalization of the Golgi apparatus is advantageous for separating enzymes, thereby maintaining consecutive and selective processing steps: enzymes catalyzing early modifications are gathered in the cis face cisternae, and enzymes catalyzing later modifications are found in trans face cisternae of the Golgi stacks.[5][10] 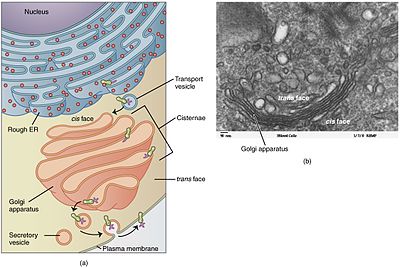 The Golgi apparatus (salmon pink) in context of the secretory pathway.

The Golgi apparatus is a major collection and dispatch station of protein products received from the endoplasmic reticulum (ER). Proteins synthesized in the ER are packaged into vesicles, which then fuse with the Golgi apparatus. These cargo proteins are modified and destined for secretion via exocytosis or for use in the cell. In this respect, the Golgi can be thought of as similar to a post office: it packages and labels items which it then sends to different parts of the cell or to the extracellular space. The Golgi apparatus is also involved in lipid transport and lysosome formation.[11]

The structure and function of the Golgi apparatus are intimately linked. Individual stacks have different assortments of enzymes, allowing for progressive processing of cargo proteins as they travel from the cisternae to the trans Golgi face.[5][10] Enzymatic reactions within the Golgi stacks occur exclusively near its membrane surfaces, where enzymes are anchored. This feature is in contrast to the ER, which has soluble proteins and enzymes in its lumen. Much of the enzymatic processing is post-translational modification of proteins. For example, phosphorylation of oligosaccharides on lysosomal proteins occurs in the early CGN.[5] Cis cisterna are associated with the removal of mannose residues.[5][10] Removal of mannose residues and addition of N-acetylglucosamine occur in medial cisternae.[5] Addition of galactose and sialic acid occurs in the trans cisternae.[5] Sulfation of tyrosines and carbohydrates occurs within the TGN.[5] Other general post-translational modifications of proteins include the addition of carbohydrates (glycosylation)[12] and phosphates (phosphorylation). Protein modifications may form a signal sequence that determines the final destination of the protein. For example, the Golgi apparatus adds a mannose-6-phosphate label to proteins destined for lysosomes. Another important function of the Golgi apparatus is in the formation of proteoglycans. Enzymes in the Golgi append proteins to glycosaminoglycans, thus creating proteoglycans.[13] Glycosaminoglycans are long unbranched polysaccharide molecules present in the extracellular matrix of animals. 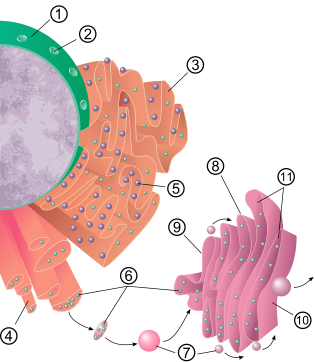 The vesicles that leave the rough endoplasmic reticulum are transported to the cis face of the Golgi apparatus, where they fuse with the Golgi membrane and empty their contents into the lumen. Once inside the lumen, the molecules are modified, then sorted for transport to their next destinations.

Those proteins destined for areas of the cell other than either the endoplasmic reticulum or the Golgi apparatus are moved through the Golgi cisternae towards the trans face, to a complex network of membranes and associated vesicles known as the trans-Golgi network (TGN). This area of the Golgi is the point at which proteins are sorted and shipped to their intended destinations by their placement into one of at least three different types of vesicles, depending upon the signal sequence they carry.

Though there are multiple models that attempt to explain vesicular traffic throughout the Golgi, no individual model can independently explain all observations of the Golgi apparatus. Currently, the cisternal progression/maturation model is the most accepted among scientists, accommodating many observations across eukaryotes. The other models are still important in framing questions and guiding future experimentation. Among the fundamental unanswered questions are the directionality of COPI vesicles and role of Rab GTPases in modulating protein cargo traffic.[14]

Brefeldin A (BFA) is a fungal metabolite used experimentally to disrupt the secretion pathway as a method of testing Golgi function.[15] BFA blocks the activation of some ADP-ribosylation factors (ARFs).[16] ARFs are small GTPases which regulate vesicular trafficking through the binding of COPs to endosomes and the Golgi.[16] BFA inhibits the function of several guanine nucleotide exchange factors (GEFs) that mediate GTP-binding of ARFs.[16] Treatment of cells with BFA thus disrupts the secretion pathway, promoting disassembly of the Golgi apparatus and distributing Golgi proteins to the endosomes and ER.[15][16]