Cellulose is an organic compound with the formula (C6H10O5)n, a polysaccharide consisting of a linear chain of several hundred to many thousands of β(1→4) linked D-glucose units.[3][4] Cellulose is an important structural component of the primary cell wall of green plants, many forms of algae and the oomycetes. Some species of bacteria secrete it to form biofilms.[5] Cellulose is the most abundant organic polymer on Earth.[6] The cellulose content of cotton fiber is 90%, that of wood is 40–50%, and that of dried hemp is approximately 57%.[7][8][9]

Cellulose is mainly used to produce paperboard and paper. Smaller quantities are converted into a wide variety of derivative products such as cellophane and rayon. Conversion of cellulose from energy crops into biofuels such as cellulosic ethanol is under development as a renewable fuel source. Cellulose for industrial use is mainly obtained from wood pulp and cotton.[6]

Some animals, particularly ruminants and termites, can digest cellulose with the help of symbiotic micro-organisms that live in their guts, such as Trichonympha. In human nutrition, cellulose is a non-digestible constituent of insoluble dietary fiber, acting as a hydrophilic bulking agent for feces and potentially aiding in defecation.

Cellulose was discovered in 1838 by the French chemist Anselme Payen, who isolated it from plant matter and determined its chemical formula.[3][10][11] Cellulose was used to produce the first successful thermoplastic polymer, celluloid, by Hyatt Manufacturing Company in 1870. Production of rayon ("artificial silk") from cellulose began in the 1890s and cellophane was invented in 1912. Hermann Staudinger determined the polymer structure of cellulose in 1920. The compound was first chemically synthesized (without the use of any biologically derived enzymes) in 1992, by Kobayashi and Shoda.[12]

The arrangement of cellulose and other polysaccharides in a plant cell wall.

Cellulose under a microscope.

Cellulose has no taste, is odorless, is hydrophilic with the contact angle of 20–30 degrees,[13] is insoluble in water and most organic solvents, is chiral and is biodegradable. It was shown to melt at 467 °C in pulse tests made by Dauenhauer et al. (2016).[14] It can be broken down chemically into its glucose units by treating it with concentrated mineral acids at high temperature.[15]

Cellulose is derived from D-glucose units, which condense through β(1→4)-glycosidic bonds. This linkage motif contrasts with that for α(1→4)-glycosidic bonds present in starch and glycogen. Cellulose is a straight chain polymer. Unlike starch, no coiling or branching occurs and the molecule adopts an extended and rather stiff rod-like conformation, aided by the equatorial conformation of the glucose residues. The multiple hydroxyl groups on the glucose from one chain form hydrogen bonds with oxygen atoms on the same or on a neighbor chain, holding the chains firmly together side-by-side and forming microfibrils with high tensile strength. This confers tensile strength in cell walls where cellulose microfibrils are meshed into a polysaccharide matrix. The high tensile strength of plant stems and of the tree wood also arises from the arrangement of cellulose fibers intimately distributed into the lignin matrix. The mechanical role of cellulose fibers in the wood matrix responsible for its strong structural resistance, can somewhat be compared to that of the reinforcement bars in concrete, lignin playing here the role of the hardened cement paste acting as the "glue" in between the cellulose fibers. Mechanical properties of cellulose in primary plant cell wall are correlated with growth and expansion of plant cells.[16] Live fluorescence microscopy techniques are promising in investigation of the role of cellulose in growing plant cells.[17]

Cotton fibres represent the purest natural form of cellulose, containing more than 90% of this polysaccharide.

Compared to starch, cellulose is also much more crystalline. Whereas starch undergoes a crystalline to amorphous transition when heated beyond 60–70 °C in water (as in cooking), cellulose requires a temperature of 320 °C and pressure of 25 MPa to become amorphous in water.[18]

Many properties of cellulose depend on its chain length or degree of polymerization, the number of glucose units that make up one polymer molecule. Cellulose from wood pulp has typical chain lengths between 300 and 1700 units; cotton and other plant fibers as well as bacterial cellulose have chain lengths ranging from 800 to 10,000 units.[6] Molecules with very small chain length resulting from the breakdown of cellulose are known as cellodextrins; in contrast to long-chain cellulose, cellodextrins are typically soluble in water and organic solvents.

The chemical formula of cellulose is (C6H10O5)n where n is the degree of polymerization and represents the number of glucose groups.[20]

Plant-derived cellulose is usually found in a mixture with hemicellulose, lignin, pectin and other substances, while bacterial cellulose is quite pure, has a much higher water content and higher tensile strength due to higher chain lengths.[6]:3384

Cellulose consists of fibrils with crystalline and amorphous regions. These cellulose fibrils may be individualized by mechanical treatment of cellulose pulp, often assisted by chemical oxidation or enzymatic treatment, yielding semi-flexible cellulose nanofibrils generally 200 nm to 1 μm in length depending on the treatment intensity.[21] Cellulose pulp may also be treated with strong acid to hydrolyze the amorphous fibril regions, thereby producing short rigid cellulose nanocrystals a few 100 nm in length.[22] These nanocelluloses are of high technological interest due to their self-assembly into cholesteric liquid crystals,[23] production of hydrogels or aerogels,[24] use in nanocomposites with superior thermal and mechanical properties,[25] and use as Pickering stabilizers for emulsions.[26]

In plants cellulose is synthesized at the plasma membrane by rosette terminal complexes (RTCs). The RTCs are hexameric protein structures, approximately 25 nm in diameter, that contain the cellulose synthase enzymes that synthesise the individual cellulose chains.[27] Each RTC floats in the cell's plasma membrane and "spins" a microfibril into the cell wall.

RTCs contain at least three different cellulose synthases, encoded by CesA (Ces is short for "cellulose synthase") genes, in an unknown stoichiometry.[28] Separate sets of CesA genes are involved in primary and secondary cell wall biosynthesis. There are known to be about seven subfamilies in the plant CesA superfamily, some of which include the more cryptic, tentatively-named Csl (cellulose synthase-like) enzymes. These cellulose syntheses use UDP-glucose to form the β(1→4)-linked cellulose.[29]

Cellulose synthesis requires chain initiation and elongation, and the two processes are separate. Cellulose synthase (CesA) initiates cellulose polymerization using a steroid primer, sitosterol-beta-glucoside, and UDP-glucose. It then utilizes UDP-D-glucose precursors to elongate the growing cellulose chain. A cellulase may function to cleave the primer from the mature chain.[32]

Cellulose is also synthesised by tunicate animals, particularly in the tests of ascidians (where the cellulose was historically termed "tunicine" (tunicin)).[33]

Cellulolysis is the process of breaking down cellulose into smaller polysaccharides called cellodextrins or completely into glucose units; this is a hydrolysis reaction. Because cellulose molecules bind strongly to each other, cellulolysis is relatively difficult compared to the breakdown of other polysaccharides.[34] However, this process can be significantly intensified in a proper solvent, e.g. in an ionic liquid.[35]

Most mammals have limited ability to digest dietary fiber such as cellulose. Some ruminants like cows and sheep contain certain symbiotic anaerobic bacteria (such as Cellulomonas and Ruminococcus spp.) in the flora of the rumen, and these bacteria produce enzymes called cellulases that hydrolyze cellulose. The breakdown products are then used by the bacteria for proliferation.[36] The bacterial mass is later digested by the ruminant in its digestive system (stomach and small intestine). Horses use cellulose in their diet by fermentation in their hindgut.[37] Some termites contain in their hindguts certain flagellate protozoa producing such enzymes, whereas others contain bacteria or may produce cellulase.[38]

The enzymes used to cleave the glycosidic linkage in cellulose are glycoside hydrolases including endo-acting cellulases and exo-acting glucosidases. Such enzymes are usually secreted as part of multienzyme complexes that may include dockerins and carbohydrate-binding modules.[39]

At temperatures above 350 °C, cellulose undergoes thermolysis (also called 'pyrolysis'), decomposing into solid char, vapors, aerosols, and gases such as carbon dioxide.[40] Maximum yield of vapors which condense to a liquid called bio-oil is obtained at 500 °C.[41]

Semi-crystalline cellulose polymers react at pyrolysis temperatures (350–600 °C) in a few seconds; this transformation has been shown to occur via a solid-to-liquid-to-vapor transition, with the liquid (called intermediate liquid cellulose or molten cellulose) existing for only a fraction of a second.[42] Glycosidic bond cleavage produces short cellulose chains of two-to-seven monomers comprising the melt. Vapor bubbling of intermediate liquid cellulose produces aerosols, which consist of short chain anhydro-oligomers derived from the melt.[43]

Cellulose is soluble in several kinds of media, several of which are the basis of commercial technologies. These dissolution processes are reversible and are used in the production of regenerated celluloses (such as viscose and cellophane) from dissolving pulp.

The most important solubilizing agent is carbon disulfide in the presence of alkali. Other agents include Schweizer's reagent, N-methylmorpholine N-oxide, and lithium chloride in dimethylacetamide. In general these agents modify the cellulose, rendering it soluble. The agents are then removed concomitant with the formation of fibers.[47] Cellulose is also soluble in many kinds of ionic liquids.[48]

The history of regenerated cellulose is often cited as beginning with George Audemars, who first manufactured regenerated nitrocellulose fibers in 1855.[49] Although these fibers were soft and strong -resembling silk- they had the drawback of being highly flammable. Hilaire de Chardonnet perfected production of nitrocellulose fibers, but manufacturing of these fibers by his process was relatively uneconomical.[49] In 1890, L.H. Despeissis invented the cuprammonium process – which uses a cuprammonium solution to solubilize cellulose – a method still used today for production of artificial silk.[50] In 1891, it was discovered that treatment of cellulose with alkali and carbon disulfide generated a soluble cellulose derivative known as viscose.[49] This process, patented by the founders of the Viscose Development Company, is the most widely used method for manufacturing regenerated cellulose products. Courtaulds purchased the patents for this process in 1904, leading to significant growth of viscose fiber production.[51] By 1931, expiration of patents for the viscose process led to its adoption worldwide. Global production of regenerated cellulose fiber peaked in 1973 at 3,856,000 tons.[49]

Regenerated cellulose can be used to manufacture a wide variety of products. While the first application of regenerated cellulose was as a clothing textile, this class of materials is also used in the production of disposable medical devices as well as fabrication of artificial membranes.[51]

The hydroxyl groups (−OH) of cellulose can be partially or fully reacted with various reagents to afford derivatives with useful properties like mainly cellulose esters and cellulose ethers (−OR). In principle, although not always in current industrial practice, cellulosic polymers are renewable resources.

The sodium carboxymethyl cellulose can be cross-linked to give the croscarmellose sodium (E468) for use as a disintegrant in pharmaceutical formulations. 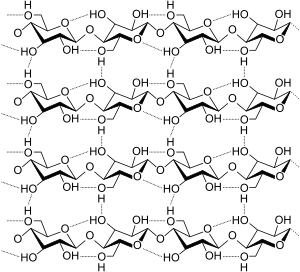 A strand of cellulose (conformation Iα), showing the hydrogen bonds (dashed) within and between cellulose molecules.

Cellulose for industrial use is mainly obtained from wood pulp and from cotton.[6]