In 2008, Blehert et al. described the fungus associated with white-nose syndrome as a member of the genus Geomyces.[5] In 2009, Gargas et al. were the first to describe the fungus as a unique species; the specific name they chose, "destructans", means "destroying".[1] The fungus was definitively identified as the cause of the syndrome in bats, according to research published in 2011 by scientists at the United States Geological Survey.[6] It was previously unknown whether this fungus was the primary cause of WNS or was an opportunistic pathogen associated with the disease, though strong evidence suggested that the fungus was the etiologic agent.[2][7] In 2013, an analysis of the phylogenetic relationship indicated that this fungus was more closely related to the genus Pseudogymnoascus than to the genus Geomyces changing its Latin binomial to Pseudogymnoascus destructans.[4]

The North American geographic distribution of P. destructans continues to increase each year since its initial introduction to New York State in 2006. Its current distribution includes 38 states in the U.S.A. and at least 7 Canadian provinces. 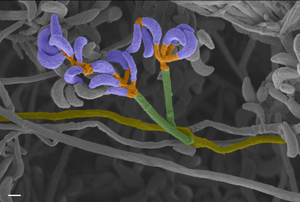 P. destructans is a psycrophilic fungus, able to grow below 10 °C (50 °F) and with an upper limit near 20 °C (68 °F). This fungus produces brown and grey colonies, secretes a brownish pigment and reproduces asexually via characteristically curved conidia when cultured on Sabaouraud dextrose agar. The asymmetrically curved conidia are produced at the tips or sides singly or in short chains. Arthroconidia can be present and undergo rhexolytic separation.[1] Research has shown that P. destructans grows optimally between 12.5 and 15.8 °C (54.5 and 60.4 °F), with an upper growth limit of about 20 °C (68 °F).[3] The in vitro growth rate of P. destructans is reported to be very slow; however, several studies have shown that not all P. destructans isolates grow at the same rate.[3][14] P. destructans grows as an opportunistic pathogen on bats, causing white-nose syndrome,[1] but it can also persist in the cave environment,[15] as a saprotroph.[16][17] P. destructans can grow and sporulate (reproduce asexually via conidiation) on keratinaceous, chitinaceous, cellulosic, and lipid/protein rich substrates including dead fish, mushroom fruit bodies and dead insects.[16] P. destructans has been shown to utilize many nitrogen sources: nitrate, nitrite, ammonium, urea, and uric acid.[16] Although P. destructans can penetrate senescing moss cells,[18] cellulosic debris may not be a long term substrate for colonization.[16] P. destructans can tolerate elevated levels of environmental inhibitory sulfur compounds (cysteine, sulfite, and sulfide), grow over a wide pH range (pH 5-11), tolerate elevated environmental levels of calcium; however, P. destructans was found to be intolerant to matric-induced water stress.

In 2011, several compounds (antifungals, fungicides, and biocides) where shown to effectively inhibit the growth of P. destructans including benzalkonium chloride, chloroacetoxyquinoline, chloroxine, ciclopirox olamine, econazole, phenylmercuric acetate, pyrithione zinc and sulconazole.[20] The same study showed that P. destructans was sensitive to Amphotericin B, itraconazole, ketoconazole, posaconazole and voriconazole, while the fungus had some resistance to anidulafungin, caspofungin, flucytosine and micafungin. A recent study (2014) identified several volatile organic compounds (benzaldehyde, benzothiazole, decanal, nonanal, N,N-dimethyloctylamine, and 2-ethyl-1-hexanol) that were previously identified from fungistatic soils, which demonstrated inhibition of both mycelial extension and growth from conidia.[21]

A 2015 study showed that Rhodococcus rhodochrous could inhibit the growth of P. destructans.[22]

A positive breakthrough may have come while utilizing competitive genetics to investigate the evolutionary history of P. destructans compared to six closely related nonpathogenic species. The study published in the journal Nature in 2018 discovered that due to a lost enzyme, P. destructans lacks an ability to repair DNA which has been damaged by ultraviolet (UV) light.[23] Ongoing research is taking place to see if there is a practical method to have bats activate a UV system as they enter and leave a hibernaculum and treat their infection. Not a long term solution, it may be enough to avoid population collapse allowing the species to evolve its own defenses to the fungus as Eurasian bats have.