Short description: Mean ("average") position of all the points in a shape 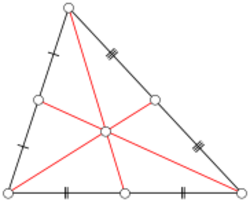 Centroid of a triangle

In mathematics and physics, the centroid or geometric center of a plane figure is the arithmetic mean position of all the points in the figure. Informally, it is the point at which a cutout of the shape (with uniformly distributed mass) could be perfectly balanced on the tip of a pin.[1] The same definition extends to any object in n-dimensional space.[2]

In geography, the centroid of a radial projection of a region of the Earth's surface to sea level is the region's geographical center.

The term "centroid" is of recent coinage (1814). It is used as a substitute for the older terms "center of gravity," and "center of mass", when the purely geometrical aspects of that point are to be emphasized. The term is peculiar to the English language. The French use "centre de gravité" on most occasions, and others use terms of similar meaning.

The center of gravity, as the name indicates, is a notion that arose in mechanics, most likely in connection with building activities. When, where, and by whom it was invented is not known, as it is a concept that likely occurred to many people individually with minor differences.

While Archimedes does not state that proposition explicitly, he makes indirect references to it, suggesting he was familiar with it. However, Jean-Étienne Montucla (1725–1799), the author of the first history of mathematics (1758), declares categorically (vol. I, p. 463) that the center of gravity of solids is a subject Archimedes did not touch.

In 1802 Charles Bossut (1730–1813) published a two-volume Essai sur l'histoire générale des mathématiques. This book was highly esteemed by his contemporaries, judging from the fact that within two years after its publication it was already available in translation in Italian (1802–03), English (1803), and German (1804). Bossut credits Archimedes with having found the centroid of plane figures, but has nothing to say about solids.[3]

While it is possible Euclid was still active in Alexandria during the childhood of Archimedes (287–212 BCE), it is certain that when Archimedes visited Alexandria, Euclid was no longer there. Thus Archimedes could not have learned the theorem that the medians of a triangle meet in a point—the center of gravity of the triangle—directly from Euclid, as this proposition is not in Euclid's Elements. The first explicit statement of this proposition is due to Heron of Alexandria (perhaps the first century CE) and occurs in his Mechanics. It may be added, in passing, that the proposition did not become common in the textbooks on plane geometry until the nineteenth century.

If the centroid is defined, it is a fixed point of all isometries in its symmetry group. In particular, the geometric centroid of an object lies in the intersection of all its hyperplanes of symmetry. The centroid of many figures (regular polygon, regular polyhedron, cylinder, rectangle, rhombus, circle, sphere, ellipse, ellipsoid, superellipse, superellipsoid, etc.) can be determined by this principle alone.

In particular, the centroid of a parallelogram is the meeting point of its two diagonals. This is not true of other quadrilaterals.

For the same reason, the centroid of an object with translational symmetry is undefined (or lies outside the enclosing space), because a translation has no fixed point.

The centroid of a triangle is the intersection of the three medians of the triangle (each median connecting a vertex with the midpoint of the opposite side).[4]

For other properties of a triangle's centroid, see below.

The centroid of a uniformly dense planar lamina, such as in figure (a) below, may be determined experimentally by using a plumbline and a pin to find the collocated center of mass of a thin body of uniform density having the same shape. The body is held by the pin, inserted at a point, off the presumed centroid in such a way that it can freely rotate around the pin; the plumb line is then dropped from the pin (figure b). The position of the plumbline is traced on the surface, and the procedure is repeated with the pin inserted at any different point (or a number of points) off the centroid of the object. The unique intersection point of these lines will be the centroid (figure c). Provided that the body is of uniform density, all lines made this way will include the centroid, and all lines will cross at exactly the same place.

For convex two-dimensional shapes, the centroid can be found by balancing the shape on a smaller shape, such as the top of a narrow cylinder. The centroid occurs somewhere within the range of contact between the two shapes (and exactly at the point where the shape would balance on a pin). In principle, progressively narrower cylinders can be used to find the centroid to arbitrary precision. In practice air currents make this infeasible. However, by marking the overlap range from multiple balances, one can achieve a considerable level of accuracy.

Of a finite set of points

For example, the figure below (a) is easily divided into a square and a triangle, both with positive area; and a circular hole, with negative area (b).

(c) Centroids of elements of the object

Another formula for the centroid is [math]\displaystyle{ C_k = \frac{\int z S_k(z) \; dz}{\int g(x) \; dx} }[/math] where Ck is the kth coordinate of C, and Sk(z) is the measure of the intersection of X with the hyperplane defined by the equation xk = z. Again, the denominator is simply the measure of X.

where A is the area of the figure X; Sy(x) is the length of the intersection of X with the vertical line at abscissa x; and Sx(y) is the analogous quantity for the swapped axes.

Of a bounded region

An integraph (a relative of the planimeter) can be used to find the centroid of an object of irregular shape with smooth (or piecewise smooth) boundary. The mathematical principle involved is a special case of Green's theorem.[9]

Of an L-shaped object

This is a method of determining the centroid of an L-shaped object.

The centroid is also the physical center of mass if the triangle is made from a uniform sheet of material; or if all the mass is concentrated at the three vertices, and evenly divided among them. On the other hand, if the mass is distributed along the triangle's perimeter, with uniform linear density, then the center of mass lies at the Spieker center (the incenter of the medial triangle), which does not (in general) coincide with the geometric centroid of the full triangle.

The area of the triangle is 1.5 times the length of any side times the perpendicular distance from the side to the centroid.[13]

A triangle's centroid lies on its Euler line between its orthocenter H and its circumcenter O, exactly twice as close to the latter as to the former:[14][15]

A triangle's centroid is the point that maximizes the product of the directed distances of a point from the triangle's sidelines.[18]

In these formulae, the vertices are assumed to be numbered in order of their occurrence along the polygon's perimeter; furthermore, the vertex ( xn, yn ) is assumed to be the same as (x0, y0), meaning [math]\displaystyle{ i + 1 }[/math] on the last case must loop around to [math]\displaystyle{ i = 0 }[/math]. (If the points are numbered in clockwise order, the area A, computed as above, will be negative; however, the centroid coordinates will be correct even in this case.)

Of a cone or pyramid

Of a tetrahedron and n-dimensional simplex

The geometric centroid coincides with the center of mass if the mass is uniformly distributed over the whole simplex, or concentrated at the vertices as n+1 equal masses.