Cinnabar (/ˈsɪnəˌbɑːr/) or cinnabarite (/sɪnəˈbɑːraɪt/), from the Ancient Greek:[7] (kinnabari), is the bright scarlet to brick-red form of mercury(II) sulfide (HgS). It is the most common source ore for refining elemental mercury, and is the historic source for the brilliant red or scarlet pigment termed vermilion and associated red mercury pigments.

Cinnabar generally occurs as a vein-filling mineral associated with recent volcanic activity and alkaline hot springs. The mineral resembles quartz in symmetry and in its exhibiting birefringence. Cinnabar has a mean refractive index near 3.2, a hardness between 2.0 and 2.5, and a specific gravity of approximately 8.1. The color and properties derive from a structure that is a hexagonal crystalline lattice belonging to the trigonal crystal system, crystals that sometimes exhibit twinning.

Cinnabar has been used for its color since antiquity in the Near East, including as a rouge-type cosmetic, in the New World since the Olmec culture, and in China since as early as the Yangshao culture, where it was used in coloring stoneware.

Associated modern precautions for use and handling of cinnabar arise from the toxicity of the mercury component, which was recognized as early as ancient Rome.

The name comes from Ancient Greek:[7] (kinnabari),[8] a Greek word most likely applied by Theophrastus to several distinct substances.[7] In Latin, it was sometimes known as minium, meaning also "red cinnamon", though both of these terms now refer specifically to lead tetroxide.[9]

Cinnabar is generally found in a massive, granular or earthy form and is bright scarlet to brick-red in color, though it occasionally occurs in crystals with a nonmetallic adamantine luster.[10][11] It resembles quartz in its symmetry. It exhibits birefringence, and it has the second highest refractive index of any mineral.[12] Its mean refractive index is 3.08 (sodium light wavelengths),[13] versus the indices for diamond and the non-mineral gallium(III) arsenide (GaAs), which are 2.42 and 3.93, respectively. The hardness of cinnabar is 2.0–2.5 on the Mohs scale, and its specific gravity 8.1.[5]

Structurally, cinnabar belongs to the trigonal crystal system.[5] It occurs as thick tabular or slender prismatic crystals or as granular to massive incrustations.[3] Crystal twinning occurs as simple contact twins.[4]

Note, mercury(II) sulfide, HgS, adopts the cinnabar structure described, and one additional structure, i.e. it is dimorphous.[14] Cinnabar is the more stable form, and is a structure akin to that of HgO: each Hg center has two short Hg−S bonds (each 2.36 Å), and four longer Hg···S contacts (with 3.10, 3.10, 3.30, and 3.30 Å separations). In addition, HgS is found in a black, non-cinnabar polymorph (metacinnabar) that has the zincblende structure.[4]

Cinnabar generally occurs as a vein-filling mineral associated with recent volcanic activity and alkaline hot springs. Cinnabar is deposited by epithermal ascending aqueous solutions (those near surface and not too hot) far removed from their igneous source.[15] It is associated with native mercury, stibnite, realgar, pyrite, marcasite, opal, quartz, chalcedony, dolomite, calcite and barite.[3]

Cinnabar is essentially found in all mineral extraction localities that yield mercury, notably Almadén (Spain). This mine was exploited from Roman times until 1991, being for centuries the most important cinnabar deposit in the world. Good cinnabar crystals have also been found there.[16][17] Cinnabar deposits also appear in Giza (Egypt); Puerto Princesa (Philippines); New Almaden, Hastings Mine, St. John's Mine, Vallejo, California (United States);[18] Idrija (Slovenia); New Idria, California (United States); Moschellandsberg [de] near Obermoschel in the Palatinate; La Ripa, at the foot of the Apuan Alps and in the Mount Amiata (Tuscany, Italy); the mountain Avala (Serbia); Huancavelica (Peru); Murfreesboro, Arkansas (United States); Terlingua, Texas (United States); and the province of Guizhou in China, where fine crystals have been obtained. It was also mined near Red Devil, Alaska (United States) on the middle Kuskokwim River. Red Devil was named after the Red Devil cinnabar mine, a primary source of mercury. It has been found in Dominica near its sulfur springs at the southern end of the island along the west coast.[19]

Cinnabar is still being deposited, such as from the hot waters of Sulphur Bank Mine[20] in California and Steamboat Springs, Nevada (United States).[21] 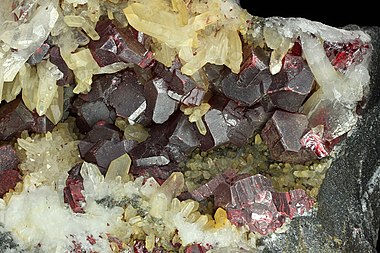 Cinnabar crystals of an individual size of one centimeter, on quartz. Almadén (Ciudad Real) Spain. Coll. Museum of the School of Mining Engineers of Madrid.

Mining and extraction of mercury

Apparatus for the distillation of cinnabar, Alchimia, 1570

As the most common source of mercury in nature,[22] cinnabar has been mined for thousands of years, even as far back as the Neolithic Age.[23] During the Roman Empire it was mined both as a pigment,[24][25] and for its mercury content.[25]:XLI

To produce liquid mercury (quicksilver), crushed cinnabar ore is roasted in rotary furnaces. Pure mercury separates from sulfur in this process and easily evaporates. A condensing column is used to collect the liquid metal, which is most often shipped in iron flasks. [26]

Associated modern precautions for use and handling of cinnabar arise from the toxicity of the mercury component, which was recognized as early as in ancient Rome.[27] Because of its mercury content, cinnabar can be toxic to human beings. Overexposure to mercury, mercurialism, was seen as an occupational disease to the ancient Romans. Though people in ancient South America often used cinnabar for art, or processed it into refined mercury (as a means to gild silver and gold to objects) the toxic properties of mercury were well known. It was dangerous to those who mined and processed cinnabar; it caused shaking, loss of sense, and death. Data suggests that mercury was retorted from cinnabar and the workers were exposed to the toxic mercury fumes.[28] "Mining in the Spanish cinnabar mines of Almadén, 225 km (140 mi) southwest of Madrid, was regarded as being akin to a death sentence due to the shortened life expectancy of the miners, who were slaves or convicts."[29]

Cinnabar has been used for its color since antiquity in the Near East, including as a rouge-type cosmetic,[27] in the New World since the Olmec culture, and in China for writing on oracle bones as early as the Zhou dynasty. Late in the Song dynasty it was used in coloring lacquerware.

Cinnabar's use as a color in the New World, since the Olmec culture,[30] is exemplified by its use in royal burial chambers during the peak of Maya civilization, most dramatically in the 7th-century Tomb of the Red Queen in Palenque, where the remains of a noble woman and objects belonging to her in her sarcophagus were completely covered with bright red powder made from cinnabar.[31]

The most popularly known use of cinnabar is in Chinese carved lacquerware, a technique that apparently originated in the Song dynasty.[32] The danger of mercury poisoning may be reduced in ancient lacquerware by entraining the powdered pigment in lacquer,[33] but could still pose an environmental hazard if the pieces were accidentally destroyed. In the modern jewellery industry, the toxic pigment is replaced by a resin-based polymer that approximates the appearance of pigmented lacquer. 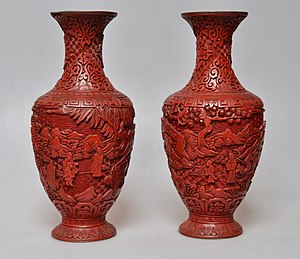