Chemistry:Degrees of freedom (physics and chemistry)

In physics and chemistry, a degree of freedom is an independent physical parameter in the formal description of the state of a physical system. The set of all states of a system is known as the system's phase space, and the degrees of freedom of the system are the dimensions of the phase space.

The location of a particle in three-dimensional space requires three position coordinates. Similarly, the direction and speed at which a particle moves can be described in terms of three velocity components, each in reference to the three dimensions of space. If the time evolution of the system is deterministic (where the state at one instant uniquely determines its past and future position and velocity as a function of time) such a system has six degrees of freedom. If the motion of the particle is constrained to a lower number of dimensions – for example, the particle must move along a wire or on a fixed surface – then the system has fewer than six degrees of freedom. On the other hand, a system with an extended object that can rotate or vibrate can have more than six degrees of freedom.

In statistical mechanics, a degree of freedom is a single scalar number describing the microstate of a system.[1] The specification of all microstates of a system is a point in the system's phase space.

In the 3D ideal chain model in chemistry, two angles are necessary to describe the orientation of each monomer.

Depending on what one is counting, there are several different ways that degrees of freedom can be defined, each with a different value.[2]

Thermodynamic degrees of freedom for gases

By the equipartition theorem, internal energy per mole of gas equals cv T, where T is absolute temperature and the specific heat at constant volume is cv = (f)(R/2). R = 8.314 J/(K mol) is the universal gas constant, and "f" is the number of thermodynamic (quadratic) degrees of freedom, counting the number of ways in which energy can occur.

Any atom or molecule has three degrees of freedom associated with translational motion (kinetic energy) of the center of mass with respect to the x, y, and z axes. These are the only degrees of freedom for a monoatomic species, such as noble gas atoms.

Both the rotational and vibrational modes are quantized, requiring a minimum temperature to be activated.[7] The "rotational temperature" to activate the rotational degrees of freedom is less than 100 K for many gases. For N2 and O2, it is less than 3 K.[1] The "vibrational temperature" necessary for substantial vibration is between 103 K and 104 K, 3521 K for N2 and 2156 K for O2.[1] Typical atmospheric temperatures are not high enough to activate vibration in N2 and O2, which comprise most of the atmosphere. (See the next figure.) However, the much less abundant greenhouse gases keep the troposphere warm by absorbing infrared from the Earth's surface, which excites their vibrational modes.[8] Much of this energy is reradiated back to the surface in the infrared through the "greenhouse effect." 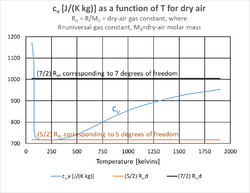 Because air is dominated by diatomic gases nitrogen and oxygen, its molar internal energy is close to cv T = (5/2)RT, determined by the 5 degrees of freedom exhibited by diatomic gases.[11] See the graph at right. For 140 K < T < 380 K, cv differs from (5/2) Rd by less than 1%. Only at temperatures well above temperatures in the troposphere and stratosphere do some molecules have enough energy to activate the vibrational modes of N2 and O2. The specific heat at constant volume, cv, increases slowly toward (7/2) R as temperature increases above T = 400 K, where cv is 1.3% above (5/2) Rd = 717.5 J/(K kg).

Counting the minimum number of co-ordinates to specify a position

One can also count degrees of freedom using the minimum number of coordinates required to specify a position. This is done as follows:

Contrary to the classical equipartition theorem, at room temperature, the vibrational motion of molecules typically makes negligible contributions to the heat capacity. This is because these degrees of freedom are frozen because the spacing between the energy eigenvalues exceeds the energy corresponding to ambient temperatures (kBT).[1]

The set of degrees of freedom X1, ... , XN of a system is independent if the energy associated with the set can be written in the following form:

where Ei is a function of the sole variable Xi.

example: if X1 and X2 are two degrees of freedom, and E is the associated energy:

For i from 1 to N, the value of the ith degree of freedom Xi is distributed according to the Boltzmann distribution. Its probability density function is the following:

In this section, and throughout the article the brackets [math]\displaystyle{ \langle \rangle }[/math] denote the mean of the quantity they enclose.

The internal energy of the system is the sum of the average energies associated with each of the degrees of freedom:

where Y is a linear combination of other quadratic degrees of freedom.

example: if X1 and X2 are two degrees of freedom, and E is the associated energy:

For example, in Newtonian mechanics, the dynamics of a system of quadratic degrees of freedom are controlled by a set of homogeneous linear differential equations with constant coefficients.

Quadratic and independent degree of freedom

X1, ... , XN are quadratic and independent degrees of freedom if the energy associated with a microstate of the system they represent can be written as:

In the classical limit of statistical mechanics, at thermodynamic equilibrium, the internal energy of a system of N quadratic and independent degrees of freedom is:

Here, the mean energy associated with a degree of freedom is:

Since the degrees of freedom are independent, the internal energy of the system is equal to the sum of the mean energy associated with each degree of freedom, which demonstrates the result.

The description of a system's state as a point in its phase space, although mathematically convenient, is thought to be fundamentally inaccurate. In quantum mechanics, the motion degrees of freedom are superseded with the concept of wave function, and operators which correspond to other degrees of freedom have discrete spectra. For example, intrinsic angular momentum operator (which corresponds to the rotational freedom) for an electron or photon has only two eigenvalues. This discreteness becomes apparent when action has an order of magnitude of the Planck constant, and individual degrees of freedom can be distinguished.