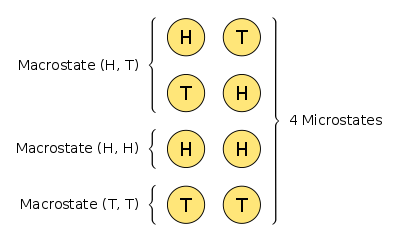 In statistical mechanics, a microstate is a specific microscopic configuration of a thermodynamic system that the system may occupy with a certain probability in the course of its thermal fluctuations. In contrast, the macrostate of a system refers to its macroscopic properties, such as its temperature, pressure, volume and density.[1] Treatments on statistical mechanics[2][3] define a macrostate as follows: a particular set of values of energy, the number of particles, and the volume of an isolated thermodynamic system is said to specify a particular macrostate of it. In this description, microstates appear as different possible ways the system can achieve a particular macrostate.

This is a microscopic statement of the notion of energy associated with the first law of thermodynamics.

For the more general case of the canonical ensemble, the absolute entropy depends exclusively on the probabilities of the microstates and is defined as

where [math]\displaystyle{ k_B }[/math] is the Boltzmann constant. For the microcanonical ensemble, consisting of only those microstates with energy equal to the energy of the macrostate, this simplifies to

with the number of microstates [math]\displaystyle{ \Omega = 1/p_i }[/math]. This form for entropy appears on Ludwig Boltzmann's gravestone in Vienna.

Heat and work can be distinguished if we take the underlying quantum nature of the system into account.

Work is the energy transfer associated with an ordered, macroscopic action on the system. If this action acts very slowly, then the adiabatic theorem of quantum mechanics implies that this will not cause jumps between energy levels of the system. In this case, the internal energy of the system only changes due to a change of the system's energy levels.[2]

The microscopic, quantum definitions of heat and work are the following:

The two above definitions of heat and work are among the few expressions of statistical mechanics where the thermodynamic quantities defined in the quantum case find no analogous definition in the classical limit. The reason is that classical microstates are not defined in relation to a precise associated quantum microstate, which means that when work changes the total energy available for distribution among the classical microstates of the system, the energy levels (so to speak) of the microstates do not follow this change.

The microstate in phase space

The description of a classical system of F degrees of freedom may be stated in terms of a 2F dimensional phase space, whose coordinate axes consist of the F generalized coordinates qi of the system, and its F generalized momenta pi. The microstate of such a system will be specified by a single point in the phase space. But for a system with a huge number of degrees of freedom its exact microstate usually is not important. So the phase space can be divided into cells of the size h0 = ΔqiΔpi, each treated as a microstate. Now the microstates are discrete and countable[4] and the internal energy U has no longer an exact value but is between U and U+δU, with [math]\displaystyle{ \delta U\ll U }[/math].

For example, in the case of a simple gas of N particles with total energy U contained in a cube of volume V, in which a sample of the gas cannot be distinguished from any other sample by experimental means, a microstate will consist of the above-mentioned N! points in phase space, and the set of microstates will be constrained to have all position coordinates to lie inside the box, and the momenta to lie on a hyperspherical surface in momentum coordinates of radius U. If on the other hand, the system consists of a mixture of two different gases, samples of which can be distinguished from each other, say A and B, then the number of microstates is increased, since two points in which an A and B particle are exchanged in phase space are no longer part of the same microstate. Two particles that are identical may nevertheless be distinguishable based on, for example, their location. (See configurational entropy.) If the box contains identical particles, and is at equilibrium, and a partition is inserted, dividing the volume in half, particles in one box are now distinguishable from those in the second box. In phase space, the N/2 particles in each box are now restricted to a volume V/2, and their energy restricted to U/2, and the number of points describing a single microstate will change: the phase space description is not the same.