Short description: Study of the 3D shapes of molecules 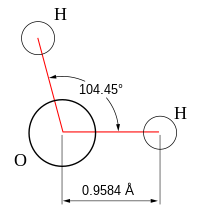 Molecular geometry is the three-dimensional arrangement of the atoms that constitute a molecule. It includes the general shape of the molecule as well as bond lengths, bond angles, torsional angles and any other geometrical parameters that determine the position of each atom.

Molecular geometry influences several properties of a substance including its reactivity, polarity, phase of matter, color, magnetism and biological activity.[1][2][3] The angles between bonds that an atom forms depend only weakly on the rest of molecule, i.e. they can be understood as approximately local and hence transferable properties.

The molecular geometry can be determined by various spectroscopic methods and diffraction methods. IR, microwave and Raman spectroscopy can give information about the molecule geometry from the details of the vibrational and rotational absorbance detected by these techniques. X-ray crystallography, neutron diffraction and electron diffraction can give molecular structure for crystalline solids based on the distance between nuclei and concentration of electron density. Gas electron diffraction can be used for small molecules in the gas phase. NMR and FRET methods can be used to determine complementary information including relative distances,[4][5][6] dihedral angles,[7][8] angles, and connectivity. Molecular geometries are best determined at low temperature because at higher temperatures the molecular structure is averaged over more accessible geometries (see next section). Larger molecules often exist in multiple stable geometries (conformational isomerism) that are close in energy on the potential energy surface. Geometries can also be computed by ab initio quantum chemistry methods to high accuracy. The molecular geometry can be different as a solid, in solution, and as a gas.

The position of each atom is determined by the nature of the chemical bonds by which it is connected to its neighboring atoms. The molecular geometry can be described by the positions of these atoms in space, evoking bond lengths of two joined atoms, bond angles of three connected atoms, and torsion angles (dihedral angles) of three consecutive bonds.

The influence of thermal excitation

Since the motions of the atoms in a molecule are determined by quantum mechanics, "motion" must be defined in a quantum mechanical way. The overall (external) quantum mechanical motions translation and rotation hardly change the geometry of the molecule. (To some extent rotation influences the geometry via Coriolis forces and centrifugal distortion, but this is negligible for the present discussion.) In addition to translation and rotation, a third type of motion is molecular vibration, which corresponds to internal motions of the atoms such as bond stretching and bond angle variation. The molecular vibrations are harmonic (at least to good approximation), and the atoms oscillate about their equilibrium positions, even at the absolute zero of temperature. At absolute zero all atoms are in their vibrational ground state and show zero point quantum mechanical motion, so that the wavefunction of a single vibrational mode is not a sharp peak, but an exponential of finite width (the wavefunction for n = 0 depicted in the article on the quantum harmonic oscillator). At higher temperatures the vibrational modes may be thermally excited (in a classical interpretation one expresses this by stating that "the molecules will vibrate faster"), but they oscillate still around the recognizable geometry of the molecule.

(The reciprocal centimeter is an energy unit that is commonly used in infrared spectroscopy; 1 cm−1 corresponds to 1.23984×10−4 eV). When an excitation energy is 500 cm−1, then about 8.9 percent of the molecules are thermally excited at room temperature. To put this in perspective: the lowest excitation vibrational energy in water is the bending mode (about 1600 cm−1). Thus, at room temperature less than 0.07 percent of all the molecules of a given amount of water will vibrate faster than at absolute zero.

As stated above, rotation hardly influences the molecular geometry. But, as a quantum mechanical motion, it is thermally excited at relatively (as compared to vibration) low temperatures. From a classical point of view it can be stated that at higher temperatures more molecules will rotate faster, which implies that they have higher angular velocity and angular momentum. In quantum mechanical language: more eigenstates of higher angular momentum become thermally populated with rising temperatures. Typical rotational excitation energies are on the order of a few cm−1. The results of many spectroscopic experiments are broadened because they involve an averaging over rotational states. It is often difficult to extract geometries from spectra at high temperatures, because the number of rotational states probed in the experimental averaging increases with increasing temperature. Thus, many spectroscopic observations can only be expected to yield reliable molecular geometries at temperatures close to absolute zero, because at higher temperatures too many higher rotational states are thermally populated.

Molecules, by definition, are most often held together with covalent bonds involving single, double, and/or triple bonds, where a "bond" is a shared pair of electrons (the other method of bonding between atoms is called ionic bonding and involves a positive cation and a negative anion).

Molecular geometries can be specified in terms of 'bond lengths', 'bond angles' and 'torsional angles'. The bond length is defined to be the average distance between the nuclei of two atoms bonded together in any given molecule. A bond angle is the angle formed between three atoms across at least two bonds. For four atoms bonded together in a chain, the torsional angle is the angle between the plane formed by the first three atoms and the plane formed by the last three atoms.

There exists a mathematical relationship among the bond angles for one central atom and four peripheral atoms (labeled 1 through 4) expressed by the following determinant. This constraint removes one degree of freedom from the choices of (originally) six free bond angles to leave only five choices of bond angles. (Note that the angles θ11, θ22, θ33, and θ44 are always zero and that this relationship can be modified for a different number of peripheral atoms by expanding/contracting the square matrix.)

Molecular geometry is determined by the quantum mechanical behavior of the electrons. Using the valence bond approximation this can be understood by the type of bonds between the atoms that make up the molecule. When atoms interact to form a chemical bond, the atomic orbitals of each atom are said to combine in a process called orbital hybridisation. The two most common types of bonds are sigma bonds (usually formed by hybrid orbitals) and pi bonds (formed by unhybridized p orbitals for atoms of main group elements). The geometry can also be understood by molecular orbital theory where the electrons are delocalised.

An understanding of the wavelike behavior of electrons in atoms and molecules is the subject of quantum chemistry.

Isomers are types of molecules that share a chemical formula but have difference geometries, resulting in different properties:

A bond angle is the geometric angle between two adjacent bonds. Some common shapes of simple molecules include:

The bond angles in the table below are ideal angles from the simple VSEPR theory (pronounced "Vesper Theory"), followed by the actual angle for the example given in the following column where this differs. For many cases, such as trigonal pyramidal and bent, the actual angle for the example differs from the ideal angle, and examples differ by different amounts. For example, the angle in H2S (92°) differs from the tetrahedral angle by much more than the angle for H2O (104.48°) does.

The greater the amount of lone pairs contained in a molecule, the smaller the angles between the atoms of that molecule. The VSEPR theory predicts that lone pairs repel each other, thus pushing the different atoms away from them.