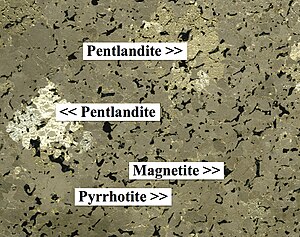 Pentlandite in pyrrhotite, ore specimen from the Sudbury Basin (field of view 3.4 cm)

Pentlandite is an iron–nickel sulfide with the chemical formula (Fe,Ni)
9S
8. Pentlandite has a narrow variation range in Ni:Fe but it is usually described as having a Ni:Fe of 1:1. It also contains minor cobalt, usually at low levels as a fraction of weight.

Pentlandite forms isometric crystals, but it is normally found in massive granular aggregates. It is brittle with a hardness of 3.5–4 and specific gravity of 4.6–5.0 and is non-magnetic. It has a yellowish bronze color.

Pentlandite has been investigated as a catalyst for the hydrogen evolution reaction in water electrolysis.[10]

It is named after the Irish scientist Joseph Barclay Pentland (1797–1873), who first noted the mineral.

Pentlandite is the most common terrestrial nickel sulfide. It typically forms during cooling of a sulfide melt. These sulfide melts, in turn, are typically formed during the evolution of a silicate melt. Because Ni is a chalcophile-like element, it has preference for (i.e. it "partitions into") sulfide phases. In sulfide undersaturated melts, Ni substitutes for other transition metals within ferromagnesian minerals, the most usual being olivine, although nickeliferous varieties of amphibole, biotite, pyroxene and spinel are known. Ni substitutes most readily for Fe2+ and Co2+ because or their similarity in size and charge.

In sulfide saturated melts, Ni behaves as a chalcophile element and partitions strongly into the sulfide phase. Because most Ni behaves as a compatible element in igneous differentiation processes, the formation of nickel-bearing sulfides is essentially restricted to sulfide saturated mafic and ultramafic melts. Minor amounts of Ni sulfides are found in mantle peridotites.

The behaviour of sulfide melts is complex and is affected by Cu:Ni:Fe:S. Typically, above 1100 °C, only one sulfide melt exists. Upon cooling to ca. 1000 °C, a solid containing mostly Fe and minor amounts of Ni and Cu is formed. This phase is called monosulfide solid solution (MSS), and is unstable at low temperatures decomposing to mixtures of pentlandite and pyrrhotite, and (rarely) pyrite. It is only upon cooling past ~550 °C (1,022 °F) (dependent on composition) that the MSS undergoes exsolution. A separate phase (a copper-rich sulfide liquid) may also form. This copper-rich liquid typically forms chalcopyrite upon cooling.

These phases typically form aphanitic equigranular massive sulfides, or are present as disseminated sulfides within rocks composed mostly of silicates. Pristine magmatic massive sulfide are rarely preserved as most deposits of nickeliferous sulfide have been metamorphosed.

Metamorphism at equal to, or higher than, greenschist facies will cause solid massive sulfides to deform in a ductile fashion and to travel some distance into the country rock and along structures. Upon cessation of metamorphism, the sulfides may inherit a foliated or sheared texture, and typically develop bright, equigranular to globular aggregates of porphyroblastic pentlandite crystals known colloquially as "fish scales".

Metamorphism may also alter the concentration of Ni and the Ni:Fe ratio and Ni:S ratio of the sulfides (see sulfide tenor). In this case, pentlandite may be replaced by millerite, and rarely heazlewoodite. Metamorphism may also be associated with metasomatism, and it is particularly common for arsenic to react with pre-existing sulfides, producing nickeline, gersdorffite and other Ni–Co arsenides.

Pentlandite is found within the lower margins of mineralised layered intrusions, the best examples being the Bushveld igneous complex, South Africa , the Voiseys Bay troctolite intrusive complex in Canada , the Duluth gabbro, in North America, and various other localities throughout the world. In these locations it forms an important nickel ore.

Pentlandite is also the principal ore mineral won from Kambalda type komatiitic nickel ore deposits, the type examples of which are in the Yilgarn Craton of Western Australia. Similar deposits exist at Nkomati, Namibia, in the Thompson Belt, Canada, and a few examples from Brazil.

Pentlandite, but primarily chalcopyrite and PGEs, are also obtained from the supergiant Norilsk nickel deposit, in trans-Siberian Russia.

The Sudbury Basin in Ontario, Canada, is associated with a large meteorite impact crater. The pentlandite-chalcopyrite-pyrrhotite ore around the Sudbury Structure formed from sulfide melts that segregated from the melt sheet produced by the impact.

Pentlandite is a catalyst for production of hydrogen and oxygen from water using electricity.[11] It is said to be as effective at this as platinum, which is significantly rarer and more expensive.[12]