Chalcopyrite (/ˌkælkəˈpaɪˌraɪt, -koʊ-/[7][8] KAL-kə-PY-ryte, -⁠koh-) is a copper iron sulfide mineral and the most abundant copper ore mineral. It has the chemical formula CuFeS2 and crystallizes in the tetragonal system. It has a brassy to golden yellow color and a hardness of 3.5 to 4 on the Mohs scale. Its streak is diagnostic as green tinged black.

On exposure to air, chalcopyrite tarnishes to a variety of oxides, hydroxides, and sulfates. Associated copper minerals include the sulfides bornite (Cu5FeS4), chalcocite (Cu2S), covellite (CuS), digenite (Cu9S5); carbonates such as malachite and azurite, and rarely oxides such as cuprite (Cu2O). Is rarely found in association with native copper. Chalcopyrite is a conductor of electricity.

The name chalcopyrite comes from the Greek words chalkos, which means copper, and pyrites', which means striking fire.[9] It was sometimes historically referred to as "yellow copper".[10]

Natural chalcopyrite has no solid solution series with any other sulfide minerals. There is limited substitution of Zn with Cu despite chalcopyrite having the same crystal structure as sphalerite.

Minor amounts of elements such as Ag, Au, Cd, Co, Ni, Pb, Sn, and Zn can be measured (at part per million levels), likely substituting for Cu and Fe. Selenium, Bi, Te, and As may substitute for sulfur in minor amounts.[14] Chalcopyrite can be oxidized to form malachite, azurite, and cuprite.[15]

thumb|left|Brass-yellow chalcopyrite crystals below large striated pyrite cubes Chalcopyrite is present with many ore-bearing environments via a variety of ore forming processes.

Chalcopyrite is present in volcanogenic massive sulfide ore deposits and sedimentary exhalative deposits, formed by deposition of copper during hydrothermal circulation. Chalcopyrite is concentrated in this environment via fluid transport.

Chalcopyrite has been the most important ore of copper since the Bronze Age.[16]

Even though Chalcopyrite does not contain the most copper in its structure relative to other minerals, it is the most important copper ore since it can be found in many localities. Chalcopyrite ore occurs in a variety of ore types, from huge masses as at Timmins, Ontario, to irregular veins and disseminations associated with granitic to dioritic intrusives as in the porphyry copper deposits of Broken Hill, the American cordillera and the Andes . The largest deposit of nearly pure chalcopyrite ever discovered in Canada was at the southern end of the Temagami Greenstone Belt where Copperfields Mine extracted the high-grade copper.[17] 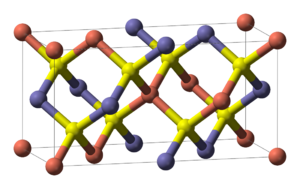 The unit cell of chalcopyrite. Copper is shown in pink, iron in blue and sulfur in yellow.

Chalcopyrite is present in the supergiant Olympic Dam Cu-Au-U deposit in South Australia.

Chalcopyrite may also be found in coal seams associated with pyrite nodules, and as disseminations in carbonate sedimentary rocks.

Chalcopyrite is a member of the tetragonal crystal system. Crystallographically the structure of chalcopyrite is closely related to that of zinc blende ZnS (sphalerite). The unit cell is twice as large, reflecting an alternation of Cu+ and Fe3+ ions replacing Zn2+ ions in adjacent cells. In contrast to the pyrite structure chalcopyrite has single S2− sulfide anions rather than disulfide pairs. Another difference is that the iron cation is not diamagnetic low spin Fe(II) as in pyrite.

In the crystal structure, each metal ion is tetrahedrally coordinated to 4 sulfur anions. Each sulfur anion is bonded to two copper atoms and two iron atoms.

Copper metal can be extracted from the open air roasting of a mixture of chalcopyrite and silica sand, as shown in the following reaction:

Although if roasted partially it produces Cu2S and FeO.