Red Hat creates, maintains, and contributes to many free software projects. It has acquired several proprietary software product codebases through corporate mergers and acquisitions and has released such software under open source licenses. (As of March 2016), Red Hat is the second largest corporate contributor to the Linux kernel version 4.14 after Intel.[8]

In 1993, Bob Young incorporated the ACC Corporation, a catalog business that sold Linux and Unix software accessories. In 1994, Marc Ewing created his own Linux distribution, which he named Red Hat Linux[14] (associated with the time Ewing wore a red Cornell University lacrosse hat, given to him by his grandfather, while attending Carnegie Mellon University[15][16][17]). Ewing released the software in October, and it became known as the Halloween release. Young bought Ewing's business in 1995,[clarification needed] and the two merged to become Red Hat Software, with Young serving as chief executive officer (CEO).

Red Hat went public on August 11, 1999, achieving—at the time—the eighth-biggest first-day gain in the history of Wall Street.[14] Matthew Szulik succeeded Bob Young as CEO in December of that year.[18] Bob Young went on to found the online print on demand and self-publishing company, Lulu in 2002.

On November 15, 1999, Red Hat acquired Cygnus Solutions. Cygnus provided commercial support for free software and housed maintainers of GNU software products such as the GNU Debugger and GNU Binutils. One of the founders of Cygnus, Michael Tiemann, became the chief technical officer of Red Hat and (As of 2008) the vice president of open-source affairs. Later Red Hat acquired WireSpeed, C2Net and Hell's Kitchen Systems.[19]

In December 2005, CIO Insight magazine conducted its annual "Vendor Value Survey", in which Red Hat ranked #1 in value for the second year in a row.[28] Red Hat stock became part of the NASDAQ-100 on December 19, 2005.

Red Hat acquired open-source middleware provider JBoss on June 5, 2006, and JBoss became a division of Red Hat. On September 18, 2006, Red Hat released the Red Hat Application Stack, which integrated the JBoss technology and which was certified by other well-known software vendors.[29][30] On December 12, 2006, Red Hat stock moved from trading on NASDAQ (RHAT) to the New York Stock Exchange (RHT). In 2007 Red Hat acquired MetaMatrix and made an agreement with Exadel to distribute its software.

On December 15, 2009, it was reported that Red Hat will pay US$8.8 million to settle a class action lawsuit related to the restatement of financial results from July 2004. The suit had been pending in U.S. District Court for the Eastern District of North Carolina. Red Hat reached the proposed settlement agreement and recorded a one-time charge of US$8.8 million for the quarter that ended Nov. 30.[35]

On January 10, 2011, Red Hat announced that it would expand its headquarters in two phases, adding 540 employees to the Raleigh operation, and investing over US$109 million. The state of North Carolina is offering up to US$15 million in incentives. The second phase involves "expansion into new technologies such as software virtualization and technology cloud offerings".[36] 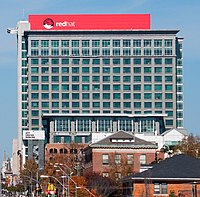 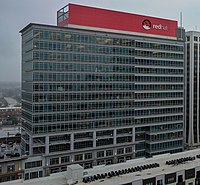 On August 25, 2011, Red Hat announced it would move about 600 employees from the N.C. State Centennial Campus to the Two Progress Plaza building.[37] A ribbon cutting ceremony was held June 24, 2013, in the re-branded Red Hat Headquarters.[38]

In 2012, Red Hat became the first one-billion dollar open-source company, reaching US$1.13 billion in annual revenue during its fiscal year.[39] Red Hat passed the $2 billion benchmark in 2015. (As of February 2018) the company's annual revenue was nearly $3 billion.[40]

On October 16, 2015, Red Hat announced its acquisition of IT automation startup Ansible, rumored for an estimated US$100 million.[41]

On October 28, 2018, IBM announced its intent to acquire Red Hat for US$34 billion, in one of its largest-ever acquisitions. The company will operate out of IBM's Hybrid Cloud division.[44][45]

Six months later, on May 3, 2019, the US Department of Justice concluded its review of IBM's proposed Red Hat acquisition,[46] and according to Steven J. Vaughan-Nichols "essentially approved the IBM/Red Hat deal".[47] The acquisition was closed on July 9, 2019.[48]

Red Hat sponsors the Fedora Project, a community-supported free software project that aims to promote the rapid progress of free and open-source software and content.[49]

The Fedora Project Board, which comprises community leaders and representatives of Red Hat, leads the project and steers the direction of the project and of Fedora, the Linux distribution it develops. Red Hat employees work with the code alongside community members, and many innovations within the Fedora Project make their way into new releases of Red Hat Enterprise Linux.

Red Hat operates on a business model based on open-source software, development within a community, professional quality assurance, and subscription-based customer support. They produce open-source code so that more programmers can make adaptations and improvements.

Red Hat sells subscriptions for the support, training, and integration services that help customers in using their open-source software products. Customers pay one set price for unlimited access to services such as Red Hat Network and up to 24/7 support.[50]

In September 2014, however, CEO Jim Whitehurst announced that Red Hat was "in the midst of a major shift from client-server to cloud-mobile".[51]

One Laptop per Child

Red Hat engineers worked with the One Laptop per Child initiative (a non-profit organization established by members of the MIT Media Lab) to design and produce an inexpensive laptop and try to provide every child in the world with access to open communication, open knowledge, and open learning. The XO-4 laptop, the (As of 2013) machine of this project, runs a slimmed-down version of Fedora 17 as its operating system.

Red Hat is the largest contributor to the GNOME desktop environment. It has several employees working full-time on Evolution, the official personal information manager for GNOME.

Dogtail, an open-source automated graphical user interface (GUI) test framework initially developed by Red Hat, consists of free software released under the GNU General Public License (GPL) and is written in Python. It allows developers to build and test their applications. Red Hat announced the release of Dogtail at the 2006 Red Hat Summit.[56][57]

(As of 2011), Red Hat works with the Condor High-Throughput Computing System community and also provides support for the software.[59]

The Tuna performance-monitoring tool runs in the MRG environment.[60]

The company originally produced a newsletter called Under the Brim. Wide Open magazine first appeared in March 2004, as a means for Red Hat to share technical content with subscribers on a regular basis. The Under the Brim newsletter and Wide Open magazine merged in November 2004, to become Red Hat Magazine. In January 2010, Red Hat Magazine became Opensource.com.[62]

In 2007, Red Hat announced that it had reached an agreement with some free software and open-source (FOSS) companies that allowed it to make a distribution portal called Red Hat Exchange, reselling FOSS software with the original branding intact.[63][64] However, by 2010, Red Hat had abandoned the Exchange program to focus their efforts more on their Open Source Channel Alliance which began in April 2009.[65]

Ceph aims primarily for completely distributed operation without a single point of failure, scalable to the exabyte level.

Ceph replicates data and makes it fault-tolerant, using commodity hardware and requiring no specific hardware support. The Ceph's system offers disaster recovery and data redundancy through techniques such as replication, erasure coding, snapshots and storage cloning. As a result of its design, the system is both self-healing and self-managing, aiming to minimize administration time and other costs.

In this way, administrators have a single, consolidated system that avoids silos and collects the storage within a common management framework. Ceph consolidates several storage use cases and improves resource utilization. It also lets an organization deploy servers where needed.

On July 31, 2018, Red Hat announced the release of Istio 1.0, a microservices management program used in tandem with the Kubernetes platform. The software purports to provide "traffic management, service identity and security, policy enforcement and telemetry" services in order to streamline Kubernetes use under the various Fedora-based operating systems. Red Hat's Brian Redbeard Harring described Istio as "aiming to be a control plane, similar to the Kubernetes control plane, for configuring a series of proxy servers that get injected between application components".[71] Also Red Hat is the second largest contributor to Kubernetes code itself, after Google.[72]

Red Hat markets a version of OpenStack which helps manage a data center in the manner of cloud computing.[73]

Red Hat CloudForms provides management of virtual machines, instances and containers based on VMware vSphere, Red Hat Virtualization, Microsoft Hyper-V, OpenStack, Amazon EC2, Google Cloud Platform, Microsoft Azure, and Red Hat OpenShift. CloudForms is based on the ManageIQ project that Red Hat open sourced. Code in ManageIQ is from the over US$100 million acquisition of ManageIQ in 2012.[74][75]

Red Hat is one of the largest contributors to the X Window System.[81][82]

Over and above Red Hat's major products and acquisitions, Red Hat programmers have produced software programming-tools and utilities to supplement standard Unix and Linux software. Some of these Red Hat "products" have found their way from specifically Red Hat operating environments via open-source channels to a wider community. Such utilities include:

Community projects under the aegis of Red Hat include:

Red Hat Czech s.r.o. is a research and development arm of Red Hat, based in Brno, Czech Republic .[91] The subsidiary was formed in 2006 and has 1,180 employees (2019).[92] Red Hat chose to enter the Czech Republic in 2006 over other locations due to the country's embrace of open-source.[93] The subsidiary expanded in 2017 to a second location in the Brno Technology Park to accommodate an additional 350 employees.[94]

In 2000, Red Hat created the subsidiary Red Hat India to deliver Red Hat software, support, and services to Indian customers.[97] Colin Tenwick, former vice president and general manager of Red Hat EMEA, said Red Hat India was opened "in response to the rapid adoption of Red Hat Linux in the subcontinent. Demand for open-source solutions from the Indian markets is rising and Red Hat wants to play a major role in this region."[97] Red Hat India has worked with local companies to enable adoption of open-source technology in both government[98] and education.[99]

Red Hat acquired Cygnus Solutions, a company that provided commercial support for free software, on January 11, 2000 – it was the company's largest acquisition, for US$674 million.[102] Michael Tiemann, co-founder of Cygnus, served as the chief technical officer of Red Hat after the acquisition. Red Hat made the most acquisitions in 2000 with five: Cygnus Solutions, Bluecurve, Wirespeed Communications, Hell's Kitchen Systems, and C2Net. On June 5, 2006, Red Hat acquired open-source middleware provider JBoss for US$420 million and integrated it as its own division of Red Hat.