In order to provide a sensible model of probability, these elements must satisfy a number of axioms, detailed in this article.

The Soviet mathematician Andrey Kolmogorov introduced the notion of probability space, together with other axioms of probability, in the 1930s. In modern probability theory there are a number of alternative approaches for axiomatization — for example, algebra of random variables. 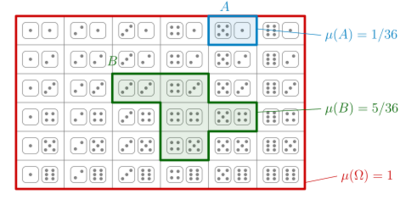 Not every subset of the sample space [math]\displaystyle{ \Omega }[/math] must necessarily be considered an event: some of the subsets are simply not of interest, others cannot be "measured". This is not so obvious in a case like a coin toss. In a different example, one could consider javelin throw lengths, where the events typically are intervals like "between 60 and 65 meters" and unions of such intervals, but not sets like the "irrational numbers between 60 and 65 meters".

In short, a probability space is a measure space such that the measure of the whole space is equal to one.

The expanded definition is the following: a probability space is a triple [math]\displaystyle{ (\Omega,\mathcal{F},P) }[/math] consisting of:

If Ω is uncountable, still, it may happen that p(ω) ≠ 0 for some ω; such ω are called atoms. They are an at most countable (maybe empty) set, whose probability is the sum of probabilities of all atoms. If this sum is equal to 1 then all other points can safely be excluded from the sample space, returning us to the discrete case. Otherwise, if the sum of probabilities of all atoms is between 0 and 1, then the probability space decomposes into a discrete (atomic) part (maybe empty) and a non-atomic part.

If p(ω) = 0 for all ω ∈ Ω (in this case, Ω must be uncountable, because otherwise P(Ω) = 1 could not be satisfied), then equation (⁎) fails: the probability of a set is not necessarily the sum over the probabilities of its elements, as summation is only defined for countable numbers of elements. This makes the probability space theory much more technical. A formulation stronger than summation, measure theory is applicable. Initially the probabilities are ascribed to some "generator" sets (see the examples). Then a limiting procedure allows assigning probabilities to sets that are limits of sequences of generator sets, or limits of limits, and so on. All these sets are the σ-algebra [math]\displaystyle{ \mathcal{F} }[/math]. For technical details see Carathéodory's extension theorem. Sets belonging to [math]\displaystyle{ \mathcal{F} }[/math] are called measurable. In general they are much more complicated than generator sets, but much better than non-measurable sets.

The fair coin is tossed three times. There are 8 possible outcomes: Ω = {HHH, HHT, HTH, HTT, THH, THT, TTH, TTT} (here "HTH" for example means that first time the coin landed heads, the second time tails, and the last time heads again). The complete information is described by the σ-algebra [math]\displaystyle{ \mathcal{F} = 2^\Omega }[/math] of 28 = 256 events, where each of the events is a subset of Ω.

If 100 voters are to be drawn randomly from among all voters in California and asked whom they will vote for governor, then the set of all sequences of 100 Californian voters would be the sample space Ω. We assume that sampling without replacement is used: only sequences of 100 different voters are allowed. For simplicity an ordered sample is considered, that is a sequence {Alice, Bryan} is different from {Bryan, Alice}. We also take for granted that each potential voter knows exactly his/her future choice, that is he/she doesn’t choose randomly.

Bryan knows the exact number of voters who are going to vote for Schwarzenegger. His incomplete information is described by the corresponding partition Ω = B0 ⊔ B1 ⊔ ⋯ ⊔ B100 and the σ-algebra [math]\displaystyle{ \mathcal{F}_\text{Bryan} }[/math] consists of 2101 events.

A random variable X is a measurable function X: Ω → S from the sample space Ω to another measurable space S called the state space.

Defining the events in terms of the sample space

Kolmogorov’s definition of probability spaces gives rise to the natural concept of conditional probability. Every set A with non-zero probability (that is, P(A) > 0) defines another probability measure [math]\displaystyle{ P(B | A) = {P(B \cap A) \over P(A)} }[/math] on the space. This is usually pronounced as the "probability of B given A".

For any event B such that P(B) > 0 the function Q defined by Q(A) = P(A|B) for all events A is itself a probability measure.

If A and B are disjoint events, then P(A ∪ B) = P(A) + P(B). This extends to a (finite or countably infinite) sequence of events. However, the probability of the union of an uncountable set of events is not the sum of their probabilities. For example, if Z is a normally distributed random variable, then P(Z = x) is 0 for any x, but P(Z ∈ R) = 1.

An empiricist, Bayesian approach to the foundations of probability theory.

Foundations of probability theory based on nonstandard analysis. Downloadable. http://www.math.princeton.edu/~nelson/books.html

A lively introduction to probability theory for the beginner, Cambridge Univ. Press.