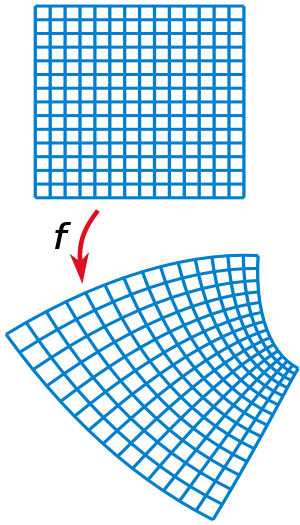 In mathematics, a conformal map is a function that locally preserves angles, but not necessarily lengths.

The conformal property may be described in terms of the Jacobian derivative matrix of a coordinate transformation. The transformation is conformal whenever the Jacobian at each point is a positive scalar times a rotation matrix (orthogonal with determinant one). Some authors define conformality to include orientation-reversing mappings whose Jacobians can be written as any scalar times any orthogonal matrix.[1]

The notion of conformality generalizes in a natural way to maps between Riemannian or semi-Riemannian manifolds.

In the literature, there is another definition of conformal: a mapping [math]\displaystyle{ f }[/math] which is one-to-one and holomorphic on an open set in the plane. The open mapping theorem forces the inverse function (defined on the image of [math]\displaystyle{ f }[/math]) to be holomorphic. Thus, under this definition, a map is conformal if and only if it is biholomorphic. The two definitions for conformal maps are not equivalent. Being one-to-one and holomorphic implies having a non-zero derivative. However, the exponential function is a holomorphic function with a nonzero derivative, but is not one-to-one since it is periodic.[2]

A map of the Riemann sphere onto itself is conformal if and only if it is a Möbius transformation.

The complex conjugate of a Möbius transformation preserves angles, but reverses the orientation. For example, circle inversions.

A diffeomorphism between two Riemannian manifolds is called a conformal map if the pulled back metric is conformally equivalent to the original one. For example, stereographic projection of a sphere onto the plane augmented with a point at infinity is a conformal map.

One can also define a conformal structure on a smooth manifold, as a class of conformally equivalent Riemannian metrics.

A classical theorem of Joseph Liouville shows that there are much fewer conformal maps in higher dimensions than in two dimensions. Any conformal map on a portion of Euclidean space of dimension three or greater can be composed from three types of transformations: a homothety, an isometry, and a special conformal transformation.

In cartography, several named map projections, including the Mercator projection and the stereographic projection are conformal. They are specially useful for use in marine navigation because of its unique property of representing any course of constant bearing as a straight segment. Such a course, known as a rhumb (or, mathematically, a loxodrome) is preferred in marine navigation because ships can sail in a constant compass direction.

If a function is harmonic (that is, it satisfies Laplace's equation [math]\displaystyle{ \nabla^2 f=0 }[/math]) over a plane domain (which is two-dimensional), and is transformed via a conformal map to another plane domain, the transformation is also harmonic. For this reason, any function which is defined by a potential can be transformed by a conformal map and still remain governed by a potential. Examples in physics of equations defined by a potential include the electromagnetic field, the gravitational field, and, in fluid dynamics, potential flow, which is an approximation to fluid flow assuming constant density, zero viscosity, and irrotational flow. One example of a fluid dynamic application of a conformal map is the Joukowsky transform.

Conformal maps are also valuable in solving nonlinear partial differential equations in some specific geometries. Such analytic solutions provide a useful check on the accuracy of numerical simulations of the governing equation. For example, in the case of very viscous free-surface flow around a semi-infinite wall, the domain can be mapped to a half-plane in which the solution is one-dimensional and straightforward to calculate. [4]

A large group of conformal maps for relating solutions of Maxwell's equations was identified by Ebenezer Cunningham (1908) and Harry Bateman (1910). Their training at Cambridge University had given them facility with the method of image charges and associated methods of images for spheres and inversion. As recounted by Andrew Warwick (2003) Masters of Theory: [6]

Warwick highlights this "new theorem of relativity" as a Cambridge response to Einstein, and as founded on exercises using the method of inversion, such as found in James Hopwood Jeans textbook Mathematical Theory of Electricity and Magnetism.

In general relativity, conformal maps are the simplest and thus most common type of causal transformations. Physically, these describe different universes in which all the same events and interactions are still (causally) possible, but a new additional force is necessary to effect this (that is, replication of all the same trajectories would necessitate departures from geodesic motion because the metric tensor is different). It is often used to try to make models amenable to extension beyond curvature singularities, for example to permit description of the universe even before the Big Bang.