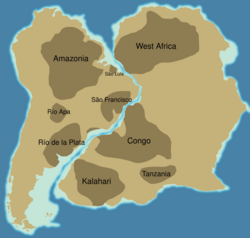 Approximate location of Mesoproterozoic (older than 1.3 Ga) cratons in South America and Africa.

The Kalahari Craton is a craton, an old and stable part of the continental lithosphere, that occupies large portions of South Africa , Botswana, Namibia and Zimbabwe. It consists of two cratons separated by the Limpopo Belt: the larger Kaapvaal Craton to the south and the smaller Zimbabwe Craton to the north. The Namaqua Belt is the southern margin of the Kaapvaal Craton.[1]

Parts of the Kalahari Craton are now in East Antarctica (the Grunehogna Craton) and West Antarctica (Haag Nunataks) and the Falkland Islands.[2] The name was first introduced by Clifford 1970.[3]

The Kaapvaal Craton, Zimbabwe Craton, and Limpopo Belt are made of Archaean terranes and contain crust at least 3.2 Ga and are underlain by a thick (250 km (160 mi)) layer of buoyant mantle that is producing garnets and diamonds.[1]