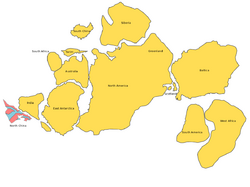 Nena, an acronym for Northern Europe–North America, was the Early Proterozoic amalgamation of Baltica and Laurentia into a single "cratonic landmass", a name first proposed in 1990.[1] Since then several similar Proterozoic supercontinents have been proposed, including Nuna and Arctica, that include other Archaean cratons, such as Siberia and East Antarctica.[2]

In the original concept Nena formed c. 1,900 million years ago in the Penokean, Makkovikan, Ketilidian, and Svecofennian orogenies.[1] However, because Nena excludes several known Archaean cratons, including those in India and Australia, it is strictly speaking not a supercontinent. Although Nena and Nuna share many similarities, Nena accounted for a larger landmass than Nuna. This extended landmass included the Angara, Antarctica, Baltica, Laurentia, and Siberia bodies.[2] Nena, or Nuna, can, nevertheless be thought of as the core of Columbia, another supercontinent concept with several proposed configurations.[2]

Throughout the amalgamation of the microcontinents which would form proto-Nena, several significant geologic processes occurred including orogenesis and continental magmatic accretion. The by-products of these processes can be found numerous regions such as southwest Ontario, northwest British Isles, and Greenland.[3] These by-products include the Marquette Range supergroup and the Moran Lake and lower Aillik groups northwest of the Makkovik orogen. These geologic findings provided a basis for the concept of the Nena supercontinent.

Nena as a continent has been associated with the Sudbury Basin Impact.