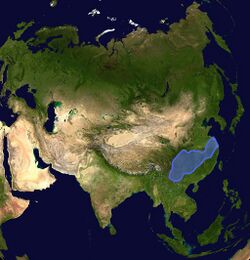 A hundred million years later, these fragmented pieces of continent assembled back together to create the supercontinent of Pannotia. South China collided with North China and Eastern Gondwana (mainly Australia ).

When Pannotia disintegrated 550 million years ago, South China (and North China) became part of and remained with Eastern Gondwana for millions of years. Late in the Silurian (175 million years later after Pannotia's disintegration), South China (and North China), rifted away from Gondwana and moved across the ancient, shrinking Proto-Tethys Ocean. A new ocean was forming in its southern end[clarify], Paleo-Tethys Ocean. By the Late Carboniferous (300 million years ago), while North China collided with Siberia and Kazakhstania, completely closing the Proto-Tethys Ocean, South China became an independent continent. For much of the Permian Period, South China remained in the tropical latitudes. And also, while most of the giant lycopods of the Carboniferous disappeared, giant lycopods remained in South China, since its isolation from the now formed Pangaea. Cimmeria, a microcontinent that consisted of today's Tibet, Iran, Turkey, and parts of Southeast Asia rifted away from Gondwana (just as North and South China did earlier), and was heading towards Laurasia. Paleo-Tethys Ocean started to shrink, while the new Tethys Ocean expanded. In the Middle Triassic, the eastern portion of Cimmeria collided with South China, and together drew northwards, towards Laurasia.

In the Late Triassic Epoch, South China collided with North China, forming the China we know today. North China and South China had been together since their collision in the Jurassic. Much of South China became a mountain range because of India 's collision with Cimmeria's southern coastline.