Lemuria /lɪˈmjʊəriə/[1] or Limuria is a hypothetical lost land located in either the Indian or the Pacific Ocean, as postulated by a now-discredited 19th-century scientific theory. The idea was then adopted by the occultists of the time and consequently has been incorporated into pop culture. Some Tamil writers have associated it with Kumari Kandam, a mythical lost continent with an ancient Tamil civilization located south of present-day India in the Indian Ocean.

Evolution of the idea

Originally, Lemuria was hypothesized as a land bridge, now sunken, which would account for certain discontinuities in biogeography. This idea has been rendered obsolete by modern theories of plate tectonics. Sunken continents such as Zealandia in the Pacific, Mauritia[2] and the Kerguelen Plateau in the Indian Ocean do exist, but no geological formation under the Indian or Pacific Oceans is known that could have served as a land bridge between continents.[3]

The idea of Lemuria was subsequently incorporated into the proto-New Age philosophy of Theosophy and subsequently into general fringe belief. Accounts of Lemuria here differ. All share a common belief that a continent existed in ancient times and sank beneath the ocean as a result of a geological, often cataclysmic, change, such as pole shift, which such theorists anticipate will destroy and transform the modern world.

In 1864, "The Mammals of Madagascar" by zoologist and biogeographer Philip Sclater appeared in The Quarterly Journal of Science. Using a classification he referred to as lemurs, but which included related primate groups,[4] and puzzled by the presence of their fossils in both Madagascar and India , but not in Africa or the Middle East, Sclater proposed that Madagascar and India had once been part of a larger continent (he was correct in this; though in reality this was the supercontinent Pangaea).

The anomalies of the mammal fauna of Madagascar can best be explained by supposing that ... a large continent occupied parts of the Atlantic and Indian Oceans ... that this continent was broken up into islands, of which some have become amalgamated with ... Africa, some ... with what is now Asia; and that in Madagascar and the Mascarene Islands we have existing relics of this great continent, for which ... I should propose the name Lemuria![4]

Sclater's theory was hardly unusual for his time; "land bridges", real and imagined, fascinated several of Sclater's contemporaries. Étienne Geoffroy Saint-Hilaire, also looking at the relationship between animals in India and Madagascar, had suggested a southern continent about two decades before Sclater, but did not give it a name.[5] The acceptance of Darwinism led scientists to seek to trace the diffusion of species from their points of evolutionary origin. Prior to the acceptance of continental drift, biologists frequently postulated submerged land masses to account for populations of land-based species now separated by barriers of water. Similarly, geologists tried to account for striking resemblances of rock formations on different continents. The first systematic attempt was made by Melchior Neumayr in his book Erdgeschichte in 1887. Many hypothetical submerged land bridges and continents were proposed during the 19th century to account for the present distribution of species. 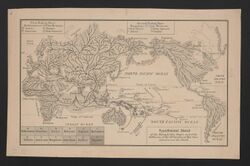 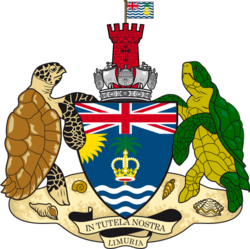 The coat of arms of the British Indian Ocean Territory with the inscription (in Latin) "Limuria is in our charge/trust".

After gaining some acceptance within the scientific community, the concept of Lemuria began to appear in the works of other scholars. Ernst Haeckel, a Darwinian taxonomist, proposed Lemuria as an explanation for the absence of "missing link" fossil records. According to another source, Haeckel put forward this thesis prior to Sclater (but without using the name "Lemuria").[6] Locating the origins of the human species on this lost continent, he claimed the fossil record could not be found because it sank beneath the sea.

Other scientists hypothesized that Lemuria had extended across parts of the Pacific Ocean, seeking to explain the distribution of various species across Asia and the Americas.

The Lemuria theory disappeared completely from conventional scientific consideration after the theories of plate tectonics and continental drift were accepted by the larger scientific community. According to the theory of plate tectonics, Madagascar and India were indeed once part of the same landmass (thus accounting for geological resemblances), but plate movement caused India to break away millions of years ago, and move to its present location. The original landmass, the supercontinent Gondwana, broke apart; it did not sink beneath sea level. 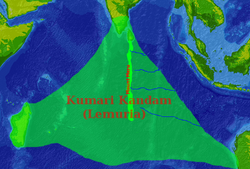 Some Tamil writers such as Devaneya Pavanar have associated Lemuria with Kumari Kandam, a legendary sunken landmass mentioned in the Tamil literature, claiming that it was the cradle of civilization.

Since the 1880s, the hypothesis of Lemuria has inspired many novels, television shows, films, and music.