Buran (Russian: Бура́н, IPA: [bʊˈran], meaning "Snowstorm" or "Blizzard"; GRAU index serial number: "11F35 K1") was the first spaceplane to be produced as part of the Soviet/Russian Buran programme. It is, depending on the source, also known as "OK-1K1", "Orbiter K1", "OK 1.01" or "Shuttle 1.01". Besides describing the first operational Soviet/Russian shuttle orbiter, "Buran" was also the designation for the entire Soviet/Russian spaceplane project and its orbiters, which were known as "Buran-class spaceplanes".

OK-1K1 completed one uncrewed spaceflight in 1988, and was destroyed in 2002 when the hangar it was stored in collapsed.[1] The Buran-class orbiters used the expendable Energia rocket, a class of super heavy-lift launch vehicle. 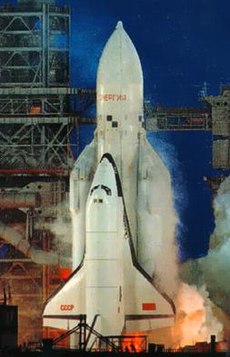 The only orbital launch of a Buran-class orbiter occurred at 03:00:02 UTC on 15 November 1988 from Baikonur Cosmodrome launch pad 110/37.[1][3] Buran was lifted into space, on an uncrewed mission, by the specially designed Energia rocket. The automated launch sequence performed as specified, and the Energia rocket lifted the vehicle into a temporary orbit before the orbiter separated as programmed. After boosting itself to a higher orbit and completing two orbits around the Earth, the ODU (Russian: объединённая двигательная установка, сombined propulsion system) engines fired automatically to begin the descent into the atmosphere, return to the launch site, and horizontal landing on a runway.[4]

In 1989, it was projected that OK-1K1 would have an uncrewed second flight by 1993, with a duration of 15–20 days.[9] Although the Buran programme was never officially cancelled, the dissolution of the Soviet Union led to funding drying up and this never took place.[2]

Size comparison[10] of the Soyuz launch vehicle (left), the US Space Shuttle (center), and the Buran-Energia (right) vehicles

Unlike the US Space Shuttle, which was propelled by a combination of solid boosters and the orbiter's own liquid-propellant engines fueled from a large tank, the Soviet/Russian shuttle system used thrust from each booster's four RD-170 liquid oxygen/kerosene engines, developed by Valentin Glushko, and another four RD-0120 liquid oxygen/liquid hydrogen engines attached to the central block.[10]

Together with the Energia carrier rocket, Buran was put in a hangar at the Baikonur Cosmodrome, Kazakhstan.

On 12 May 2002,[1] during a severe storm at the Baikonur Cosmodrome, the MIK 112 hangar housing OK-1K1 collapsed as a result of poor maintenance. The collapse killed several workers and destroyed the craft as well as the Energia carrier.[11]