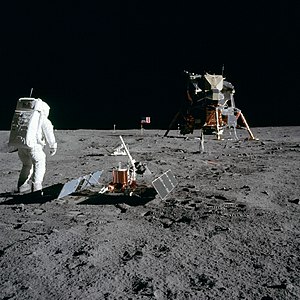 Apollo 11 Lunar Module Eagle was the first crewed spacecraft to land on the Moon (July 20, 1969).

This is a list of all crewed spacecraft types that have flown into space, including sub-orbital flights above 80 km, Space Stations that have been visited by at least one crew, and spacecraft currently planned to operate with crew in the future.[1] It does not contain spacecraft that have only flown un-crewed and have retired from service, even if they were designed for crewed flight, such as Buran, or crewed flights by spacecraft below 80 km. There is some debate concerning the height at which space is reached (the Karman Line), the Fédération Aéronautique Internationale (FAI) recognise 100 km, NASA, and the USAF recognise this as 50 miles (approx 80 km) - this article choses the latter, to include the widest possible definition.[2]

Since the first crewed spaceflight of Vostok 1 in 1961 there have been 13 types of spacecraft that have made crewed flights into space - nine American, three Russian, and one Chinese. There are currently five operational crewed spacecraft, which form the first part of the list below; the eight retired spacecraft types are listed in the next section; and crewed spacecraft currently in development are listed last. Space Stations are listed beneath each appropriate section, dates of operation reflect when the first and last crews visited, not when they were launched and deorbited. There are currently two space stations in orbit around Earth, the International Space Station and the Chinese Tiangong space station.

Scaled comparison of crewed spacecraft, including names, manufacturers, and dates of operation

Commercial Astronaut Audrey Powers views outside their window during her flight on New Shepard. 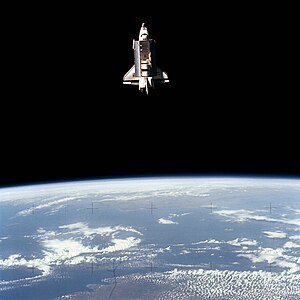