R is a programming language for statistical computing and graphics supported by the R Core Team and the R Foundation for Statistical Computing. Created by statisticians Ross Ihaka and Robert Gentleman, R is used among data miners and statisticians for data analysis and developing statistical software. Users have created packages to augment the functions of the R language.

The official R software environment is an open-source free software environment within the GNU package, available under the GNU General Public License. It is written primarily in C, Fortran, and R itself (partially self-hosting). Precompiled executables are provided for various operating systems. R has a command line interface.[7] Multiple third-party graphical user interfaces are also available, such as RStudio, an integrated development environment, and Jupyter, a notebook interface.

R is an open-source implementation of the S programming language combined with lexical scoping semantics from Scheme, which allow objects to be defined in predetermined blocks rather than the entirety of the code.[1] S was created by Rick Becker, John Chambers, Doug Dunn, Jean McRae, and Judy Schilling at Bell Labs around 1976. Designed for statistical analysis, the language is an interpreted language whose code could be directly run without a compiler.[8] Many programs written for S run unaltered in R.[7] As a dialect of the Lisp language, Scheme was created by Gerald J. Sussman and Guy L. Steele Jr. at MIT around 1975.[9]

In 1991, statisticians Ross Ihaka and Robert Gentleman at the University of Auckland, New Zealand, embarked on an S implementation.[10] It was named partly after the first names of the first two R authors and partly as a play on the name of S.[7] They began publicizing it on the data archive StatLib and the s-news mailing list in August 1993.[11] In 1995, statistician Martin Mächler convinced Ihaka and Gentleman to make R a free and open-source software under the GNU General Public License.[11][12][13] The first official release came in June 1995.[11] The first official "stable beta" version (v1.0) was released on 29 February 2000.[14][15]

R's data structures include vectors, arrays, lists, and data frames.[21] Vectors are ordered collections of values and can be mapped to arrays of one or more dimensions in a column major order. That is, given an ordered collection of dimensions, one fills in values along the first dimension first, then fill in one-dimensional arrays across the second dimension, and so on.[22] R supports array arithmetics and in this regard is like languages such as APL and MATLAB.[21][23] The special case of an array with two dimensions is called a matrix. Lists serve as collections of objects that do not necessarily have the same data type. Data frames contain a list of vectors of the same length, plus a unique set of row names.[21] R has no scalar data type.[24] Instead, a scalar is represented as a length-one vector.[25]

R and its libraries implement various statistical techniques, including linear and nonlinear modeling, classical statistical tests, spatial and time-series analysis, classification, clustering, and others. For computationally intensive tasks, C, C++, and Fortran code can be linked and called at run time. Another of R's strengths is static graphics; it can produce publication-quality graphs that include mathematical symbols.[26]

R is an interpreted language; users can access it through a command-line interpreter. If a user types 2+2 at the R command prompt and presses enter, the computer replies with 4.

R supports procedural programming with functions and, for some functions, object-oriented programming with generic functions.[27] Due to its S heritage, R has stronger object-oriented programming facilities than most statistical computing languages. Extending it is facilitated by its lexical scoping rules, which are derived from Scheme.[28] R uses S-expressions to represent both data and code. R's extensible object system includes objects for (among others): regression models, time-series and geo-spatial coordinates. Advanced users can write C, C++,[29] Java,[30] .NET[31] or Python code to manipulate R objects directly.[32]

Functions are first-class objects and can be manipulated in the same way as data objects, facilitating meta-programming that allows multiple dispatch. Function arguments are passed by value, and are lazy—that is to say, they are only evaluated when they are used, not when the function is called.[33] A generic function acts differently depending on the classes of the arguments passed to it. In other words, the generic function dispatches the method implementation specific to that object's class. For example, R has a generic print function that can print almost every class of object in R with print(objectname).[34] Many of R's standard functions are written in R, which makes it easy for users to follow the algorithmic choices made. R is highly extensible through the use of packages for specific functions and specific applications.

R's capabilities are extended through user-created[35] packages, which offer statistical techniques, graphical devices, import/export, reporting (RMarkdown, knitr, Sweave), etc. R's packages and the ease of installing and using them, has been cited as driving the language's widespread adoption in data science.[36][37][38][39][40] The packaging system is also used by researchers to create compendia to organise research data, code and report files in a systematic way for sharing and archiving.[41]

Multiple packages are included with the basic installation. Additional packages are available on CRAN,[17] Bioconductor, Omegahat,[42] GitHub, and other repositories.[43][44][45]

The "Task Views" on the CRAN website[46] lists packages in fields including Finance, Genetics, High Performance Computing, Machine Learning, Medical Imaging, Social Sciences and Spatial Statistics. R has been identified by the FDA as suitable for interpreting data from clinical research.[47] Microsoft maintains a daily snapshot of CRAN that dates back to Sept. 17, 2014.[48]

Other R package resources include R-Forge,[49] a platform for the collaborative development of R packages. The Bioconductor project provides packages for genomic data analysis, including object-oriented data-handling and analysis tools for data from Affymetrix, cDNA microarray, and next-generation high-throughput sequencing methods.[50]

A group of packages called the Tidyverse, which can be considered a "dialect" of the R language, is increasingly popular among developers.[note 1] It strives to provide a cohesive collection of functions to deal with common data science tasks, including data import, cleaning, transformation and visualisation (notably with the ggplot2 package). Dynamic and interactive graphics are available through additional packages.[51]

A list of changes in R releases is maintained in various "news" files at CRAN.[54] Some highlights are listed below for several major releases.

Various applications can be used to edit or run R code.[62]

Early developers preferred to run R via the command line console,[63] succeeded by those who prefer an IDE.[64] IDEs for R include (in alphabetical order) Rattle GUI, R Commander, RKWard, RStudio, and Tinn-R.[63] R is also supported in multi-purpose IDEs such as Eclipse via the StatET plugin,[65] and Visual Studio via the R Tools for Visual Studio.[66] Of these, RStudio is the most commonly used.[64]

TIBCO, who previous sold the commercial implementation S-PLUS, built a runtime engine called TERR, which is part of Spotfire.[85]

Microsoft R Open (MRO) is a fully compatible R distribution with modifications for multi-threaded computations.[86][87] As of 30 June 2021, Microsoft started to phase out MRO in favor of the CRAN distribution. [88]

R has local communities worldwide for users to network, share ideas, and learn.[89][90]

A growing number of R events bring users together, such as conferences (e.g. useR!, WhyR?, conectaR, SatRdays),[91][92] meetups,[93] as well as R-Ladies groups[94] that promote gender diversity. The R Foundation taskforce focuses on women and other under-represented groups.[95]

The official annual gathering of R users is called "useR!".[96] The first such event was useR! 2004 in May 2004, Vienna, Austria.[97] After skipping 2005, the useR! conference has been held annually, usually alternating between locations in Europe and North America.[98] History:[96]

The R Journal is an open access, refereed journal of the R project. It features short to medium length articles on the use and development of R, including packages, programming tips, CRAN news, and foundation news.

R is comparable to popular commercial statistical packages such as SAS, SPSS, and Stata. One difference is that R is available at no charge under a free software license.[100]

In January 2009, the New York Times ran an article charting the growth of R, the reasons for its popularity among data scientists and the threat it poses to commercial statistical packages such as SAS.[101] In June 2017 data scientist Robert Muenchen published a more in-depth comparison between R and other software packages, "The Popularity of Data Science Software".[102]

R is more procedural than either SAS or SPSS, both of which make heavy use of pre-programmed procedures (called "procs") that are built-in to the language environment and customized by parameters of each call. R generally processes data in-memory, which limits its usefulness in processing larger files.[103]

Although R is an open-source project, some companies provide commercial support and extensions.

IBM offers support for in-Hadoop execution of R,[108] and provides a programming model for massively parallel in-database analytics in R.[109]

TIBCO offers a runtime-version R as a part of Spotfire.[110]

Mango Solutions offers a validation package for R, ValidR,[111][112] to comply with drug approval agencies, such as the FDA. These agencies required the use of validated software, as attested by the vendor or sponsor.[113]

The following examples illustrate the basic syntax of the language and use of the command-line interface. (An expanded list of standard language features can be found in the R manual, "An Introduction to R".[114])

In R, the generally preferred assignment operator is an arrow made from two characters <-, although = can be used in some cases.[115][116]

Structure of a function

One of R's strengths is the ease of creating new functions. Objects in the function body remain local to the function, and any data type may be returned.[117] Example:

The R language has built-in support for data modeling and graphics. The following example shows how R can easily generate and plot a linear model with residuals. 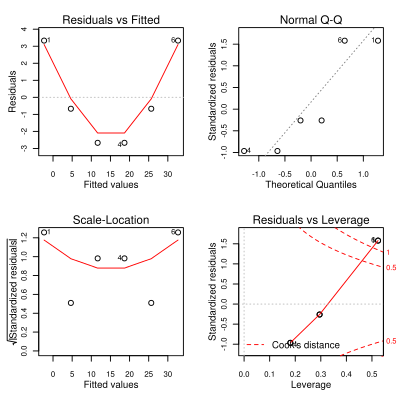 "Mandelbrot.gif" – graphics created in R with 14 lines of code in Example 2