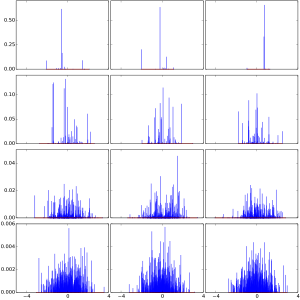 As an example, a bag of 100 real-world dice is a random probability mass function (random pmf) - to sample this random pmf you put your hand in the bag and draw out a die, that is, you draw a pmf. A bag of dice manufactured using a crude process 100 years ago will likely have probabilities that deviate wildly from the uniform pmf, whereas a bag of state-of-the-art dice used by Las Vegas casinos may have barely perceptible imperfections. We can model the randomness of pmfs with the Dirichlet distribution.[1]

The Dirichlet process was formally introduced by Thomas Ferguson in 1973.[2] It has since been applied in data mining and machine learning, among others for natural language processing, computer vision and bioinformatics.

One application area where the Dirichlet has proved to be particularly useful is in modeling the distribution of words in text documents. If we have a dictionary containing k possible words, then a particular document can be represented by a pmf of length k produced by normalizing the empirical frequency of its words. A group of documents produces a collection of pmfs, and we can fit a Dirichlet distribution to capture the variability of these pmfs. Different Dirichlet distributions can be used to model documents by different authors or documents on different topics.[3]

Dirichlet processes are usually used when modelling data that tends to repeat previous values in a so-called "rich get richer" fashion. Specifically, suppose that the generation of values [math]\displaystyle{ X_1,X_2,\dots }[/math] can be simulated by the following algorithm.

At the same time, another common model for data is that the observations [math]\displaystyle{ X_1,X_2,\dots }[/math] are assumed to be independent and identically distributed (i.i.d.) according to some (random) distribution [math]\displaystyle{ P }[/math]. The goal of introducing Dirichlet processes is to be able to describe the procedure outlined above in this i.i.d. model.

In practice, however, drawing a concrete distribution [math]\displaystyle{ P }[/math] is impossible, since its specification requires an infinite amount of information. This is a common phenomenon in the context of Bayesian non-parametric statistics where a typical task is to learn distributions on function spaces, which involve effectively infinitely many parameters. The key insight is that in many applications the infinite-dimensional distributions appear only as an intermediary computational device and are not required for either the initial specification of prior beliefs or for the statement of the final inference.

File:Chinese Restaurant Process for DP(0.5,H).webm A widely employed metaphor for the Dirichlet process is based on the so-called Chinese restaurant process. The metaphor is as follows:

Imagine a Chinese restaurant in which customers enter. A new customer sits down at a table with a probability proportional to the number of customers already sitting there. Additionally, a customer opens a new table with a probability proportional to the scaling parameter [math]\displaystyle{ \alpha }[/math]. After infinitely many customers entered, one obtains a probability distribution over infinitely many tables to be chosen. This probability distribution over the tables is a random sample of the probabilities of observations drawn from a Dirichlet process with scaling parameter [math]\displaystyle{ \alpha }[/math].

If one associates draws from the base measure [math]\displaystyle{ H }[/math] with every table, the resulting distribution over the sample space [math]\displaystyle{ S }[/math] is a random sample of a Dirichlet process. The Chinese restaurant process is related to the Pólya urn sampling scheme which yields samples from finite Dirichlet distributions.

Because customers sit at a table with a probability proportional to the number of customers already sitting at the table, two properties of the DP can be deduced:

A third approach to the Dirichlet process is the so-called stick-breaking process view. Conceptually, this involves repeatedly breaking off and discarding a random fraction (sampled from a Beta distribution) of a "stick" that is initially of length 1. Remember that draws from a Dirichlet process are distributions over a set [math]\displaystyle{ S }[/math]. As noted previously, the distribution drawn is discrete with probability 1. In the stick-breaking process view, we explicitly use the discreteness and give the probability mass function of this (random) discrete distribution as:

The smaller [math]\displaystyle{ \alpha }[/math] is, the less of the stick will be left for subsequent values (on average), yielding more concentrated distributions.

The stick-breaking process is similar to the construction where one samples sequentially from marginal beta distributions in order to generate a sample from a Dirichlet distribution. See[5] for the proof.

Yet another way to visualize the Dirichlet process and Chinese restaurant process is as a modified Pólya urn scheme sometimes called the Blackwell-MacQueen sampling scheme. Imagine that we start with an urn filled with [math]\displaystyle{ \alpha }[/math] black balls. Then we proceed as follows:

Use as a prior distribution

The Dirichlet Process can be used as a prior distribution to estimate the probability distribution that generates the data. In this section, we consider the model

where [math]\displaystyle{ \mathbb{P}_n }[/math] is defined below.

This implies that credible sets you construct are asymptotic confidence sets, and the Bayesian inference based on the Dirichlet process is asymptotically also valid frequentist inference.

Use in Dirichlet mixture models

To understand what Dirichlet processes are and the problem they solve we consider the example of data clustering. It is a common situation that data points are assumed to be distributed in a hierarchical fashion where each data point belongs to a (randomly chosen) cluster and the members of a cluster are further distributed randomly within that cluster.

For example, we might be interested in how people will vote on a number of questions in an upcoming election. A reasonable model for this situation might be to classify each voter as a liberal, a conservative or a moderate and then model the event that a voter says “Yes” to any particular question as a Bernoulli random variable with the probability dependent on which political cluster they belong to. By looking at how votes were cast in previous years on similar pieces of legislation one could fit a predictive model using a simple clustering algorithm such as k-means. That algorithm, however, requires knowing in advance the number of clusters that generated the data. In many situations, it is not possible to determine this ahead of time, and even when we can reasonably assume a number of clusters we would still like to be able to check this assumption. For example, in the voting example above the division into liberal, conservative and moderate might not be finely tuned enough; attributes such as a religion, class or race could also be critical for modelling voter behaviour, resulting in more clusters in the model.

As another example, we might be interested in modelling the velocities of galaxies using a simple model assuming that the velocities are clustered, for instance by assuming each velocity is distributed according to the normal distribution [math]\displaystyle{ v_i\sim N(\mu_k,\sigma^2) }[/math], where the [math]\displaystyle{ i }[/math]th observation belongs to the [math]\displaystyle{ k }[/math]th cluster of galaxies with common expected velocity. In this case it is far from obvious how to determine a priori how many clusters (of common velocities) there should be and any model for this would be highly suspect and should be checked against the data. By using a Dirichlet process prior for the distribution of cluster means we circumvent the need to explicitly specify ahead of time how many clusters there are, although the concentration parameter still controls it implicitly.

Fitting the model described above based on observed data [math]\displaystyle{ D }[/math] means finding the posterior distribution [math]\displaystyle{ p\left(\boldsymbol{\pi},\boldsymbol{\mu}\mid D\right) }[/math] over cluster probabilities and their associated means. In the infinite dimensional case it is obviously impossible to write down the posterior explicitly. It is, however, possible to draw samples from this posterior using a modified Gibbs sampler.[7] This is the critical fact that makes the Dirichlet process prior useful for inference.

Applications of the Dirichlet process

Dirichlet processes are frequently used in Bayesian nonparametric statistics. "Nonparametric" here does not mean a parameter-less model, rather a model in which representations grow as more data are observed. Bayesian nonparametric models have gained considerable popularity in the field of machine learning because of the above-mentioned flexibility, especially in unsupervised learning. In a Bayesian nonparametric model, the prior and posterior distributions are not parametric distributions, but stochastic processes.[8] The fact that the Dirichlet distribution is a probability distribution on the simplex of sets of non-negative numbers that sum to one makes it a good candidate to model distributions over distributions or distributions over functions. Additionally, the nonparametric nature of this model makes it an ideal candidate for clustering problems where the distinct number of clusters is unknown beforehand. In addition, the Dirichlet process has also been used for developing a mixture of expert models, in the context of supervised learning algorithms (regression or classification settings). For instance, mixtures of Gaussian process experts, where the number of required experts must be inferred from the data.[9][10]

As draws from a Dirichlet process are discrete, an important use is as a prior probability in infinite mixture models. In this case, [math]\displaystyle{ S }[/math] is the parametric set of component distributions. The generative process is therefore that a sample is drawn from a Dirichlet process, and for each data point, in turn, a value is drawn from this sample distribution and used as the component distribution for that data point. The fact that there is no limit to the number of distinct components which may be generated makes this kind of model appropriate for the case when the number of mixture components is not well-defined in advance. For example, the infinite mixture of Gaussians model,[11] as well as associated mixture regression models, e.g.[12]

The infinite nature of these models also lends them to natural language processing applications, where it is often desirable to treat the vocabulary as an infinite, discrete set.