A heart transplant, or a cardiac transplant, is a surgical transplant procedure performed on patients with end-stage heart failure or severe coronary artery disease when other medical or surgical treatments have failed. (As of 2018), the most common procedure is to take a functioning heart, with or without both lungs, from a recently deceased organ donor (brain death is the standard[1]) and implant it into the patient. The patient's own heart is either removed and replaced with the donor heart (orthotopic procedure) or, much less commonly, the recipient's diseased heart is left in place to support the donor heart (heterotopic, or "piggyback", transplant procedure).

Approximately 3,500 heart transplants are performed each year worldwide, more than half of which are in the US.[2] Post-operative survival periods average 15 years.[3] Heart transplantation is not considered to be a cure for heart disease; rather it is a life-saving treatment intended to improve the quality and duration of life for a recipient.[4] 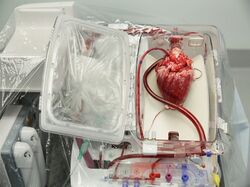 American medical researcher Simon Flexner was one of the first people to mention the possibility of heart transplantation. In 1907, he wrote the paper "Tendencies in Pathology," in which he said that it would be possible one day by surgery to replace diseased human organs – including arteries, stomach, kidneys and heart.[5]

Not having a human donor heart available, James D. Hardy of the University of Mississippi Medical Center transplanted the heart of a chimpanzee into the chest of dying Boyd Rush in the early morning of Jan. 24, 1964. Hardy used a defibrillator to shock the heart to restart beating. This heart did beat in Rush's chest for 60 to 90 minutes (sources differ), and then Rush died without regaining consciousness.[6][7][8] Although Hardy was a respected surgeon who had performed the world's first human-to-human lung transplant a year earlier,[9][10] author Donald McRae states that Hardy could feel the "icy disdain" from fellow surgeons at the Sixth International Transplantation Conference several weeks after this attempt with the chimpanzee heart.[11] Hardy had been inspired by the limited success of Keith Reemtsma at Tulane University in transplanting chimpanzee kidneys into human patients with kidney failure.[12] The consent form Hardy asked Rush's stepsister to sign did not include the possibility that a chimpanzee heart might be used, although Hardy stated that he did include this in verbal discussions.[7][12][13] A xenotransplantation is the technical term for the transplant of an organ or tissue from one species to another.

Dr Dhaniram Baruah of Assam, India was the first heart surgeon to transplant a pig's heart in human body.[14] However the recipient died subsequently. The world's first successful pig-to-human heart transplant was performed in January 2022 by surgeon Bartley P. Griffith of USA.[15]

On December 6, 1967, at Maimonides Hospital in Brooklyn, New York, Adrian Kantrowitz performed the world's first pediatric heart transplant.[16][20] The infant's new heart stopped beating after 7 hours and could not be restarted. At a following press conference, Kantrowitz emphasized that he did not consider the operation a success.[21]

Norman Shumway performed the first adult heart transplant in the United States on January 6, 1968, at the Stanford University Hospital.[16] A team led by Donald Ross performed the first heart transplant in the United Kingdom on May 3, 1968.[22] These were allotransplants, the technical term for a transplant from a non-genetically identical individual of the same species. Brain death is the current ethical standard for when a heart donation can be allowed.

Worldwide, more than 100 transplants were performed by various doctors during 1968.[23] Only a third of these patients lived longer than three months.[24]

The next big breakthrough came in 1983 when cyclosporine entered widespread usage. This drug enabled much smaller amounts of corticosteroids to be used to prevent many cases of rejection (the "corticosteroid-sparing" effect of cyclosporine).[25]

On June 9, 1984, "JP" Lovette IV of Denver, Colorado, became the world's first successful pediatric heart transplant. Columbia-Presbyterian Medical Center surgeons transplanted the heart of 4-year-old John Nathan Ford of Harlem into 4-year-old JP a day after the Harlem child died of injuries received in a fall from a fire escape at his home. JP was born with multiple heart defects. The transplant was done by a surgical team led by Dr. Eric A. Rose, director of cardiac transplantation at New York–Presbyterian Hospital. Drs. Keith Reemtsma and Fred Bowman also were members of the team for the six-hour operation.[26]

Worldwide, about 3,500 heart transplants are performed annually. The vast majority of these are performed in the United States (2,000–2,300 annually).[2] Cedars-Sinai Medical Center in Los Angeles, California, currently is the largest heart transplant center in the world, having performed 132 adult transplants in 2015 alone.[28] About 800,000 people have NYHA Class IV heart failure symptoms indicating advanced heart failure.[29] The great disparity between the number of patients needing transplants and the number of procedures being performed spurred research into the transplantation of non-human hearts into humans after 1993. Xenografts from other species and artificial hearts are two less successful alternatives to allografts.[3]

The ability of medical teams to perform transplants continues to expand. For example, Sri Lanka's first heart transplant was successfully performed at the Kandy General Hospital on July 7, 2017.[30] In recent years, donor heart preservation has improved and Organ Care System is being used in some centers in order to reduce the harmful effect of cold storage.[31]

During heart transplant, the vagus nerve is severed, thus removing parasympathetic influence over the myocardium. However, some limited return of sympathetic nerves has been demonstrated in humans.[32]

Recently, Australian researchers found a way to give more time for a heart to survive prior to the transplant, almost double the time.[33]

On January 7, 2022, David Bennett, aged 57, of Maryland became the first person to receive a gene-edited pig heart in a transplant at the University of Maryland Medical Center. Before the transplant, David was unable to receive a human heart due to the patient's past conditions with heart failure and an irregular heartbeat, causing surgeons to use the pig heart that was genetically modified.[34][35] Bennett died two months later at University of Maryland Medical Center in on March 8, 2022.[36][37]

Some patients are less suitable for a heart transplant, especially if they have other circulatory conditions related to their heart condition. The following conditions in a patient increase the chances of complications.

Patients who are in need of a heart transplant but do not qualify may be candidates for an artificial heart[2] or a left ventricular assist device (LVAD).

Since the transplanted heart originates from another organism, the recipient's immune system typically attempts to reject it. The risk of rejection never fully goes away, and the patient will be on immunosuppressive drugs for the rest of their life. These drugs may cause unwanted side effects, such as an increased likelihood of infections or the development of certain cancers. Recipients can acquire kidney disease from a heart transplant due to the side effects of immunosuppressant medications. Many recent advances in reducing complications due to tissue rejection stem from mouse heart transplant procedures.[43]

People who have had heart transplants are monitored in various ways to test for the development of rejection.[44]

The prognosis for heart transplant patients following the orthotopic procedure has improved over the past 20 years, and as of June 5, 2009 the survival rates were:[46]

In 2007, researchers from the Johns Hopkins University School of Medicine discovered that "men receiving female hearts had a 15% increase in the risk of adjusted cumulative mortality" over five years compared to men receiving male hearts. Survival rates for women did not significantly differ based on male or female donors.[47]