Short description: Abnormal pigmentation symptom for disease of the liver

Jaundice, also known as icterus, is a yellowish or greenish pigmentation of the skin and sclera due to high bilirubin levels.[3][6] Jaundice in adults is typically a sign indicating the presence of underlying diseases involving abnormal heme metabolism, liver dysfunction, or biliary-tract obstruction.[7] The prevalence of jaundice in adults is rare, while jaundice in babies is common, with an estimated 80% affected during their first week of life.[8] The most commonly associated symptoms of jaundice are itchiness,[2] pale feces, and dark urine.[4]

Normal levels of bilirubin in blood are below 1.0 mg/dl (17 μmol/L), while levels over 2–3 mg/dl (34-51 μmol/L) typically result in jaundice.[4][9] High blood bilirubin is divided into two types - unconjugated and conjugated bilirubin.[10]

Causes of jaundice vary from relatively benign to potentially fatal.[10] High unconjugated bilirubin may be due to excess red blood cell breakdown, large bruises, genetic conditions such as Gilbert's syndrome, not eating for a prolonged period of time, newborn jaundice, or thyroid problems.[4][10] High conjugated bilirubin may be due to liver diseases such as cirrhosis or hepatitis, infections, medications, or blockage of the bile duct,[4] due to factors including gallstones, cancer, or pancreatitis.[4] Other conditions can also cause yellowish skin, but are not jaundice, including carotenemia, which can develop from eating large amounts of foods containing carotene — or medications such as rifampin.[4]

Treatment of jaundice is typically determined by the underlying cause.[5] If a bile duct blockage is present, surgery is typically required; otherwise, management is medical.[5] Medical management may involve treating infectious causes and stopping medication that could be contributing to the jaundice.[5] Jaundice in newborns may be treated with phototherapy or exchanged transfusion depending on age and prematurity when the bilirubin is greater than 4–21 mg/dl (68-360 μmol/L).[9] The itchiness may be helped by draining the gallbladder, ursodeoxycholic acid, or opioid antagonists such as naltrexone.[2] The word "jaundice" is from the French jaunisse, meaning "yellow disease".[11][12] 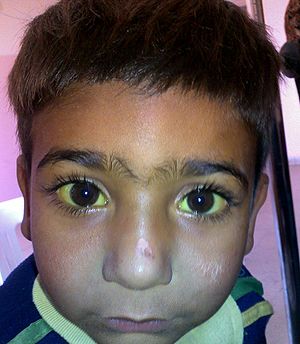 The most common signs of jaundice in adults are a yellowish discoloration of the white area of the eye (sclera) and skin[13] with scleral icterus presence indicating a serum bilirubin of at least 3 mg/dl.[14] Other common signs include dark urine (bilirubinuria) and pale (acholia) fatty stool (steatorrhea).[15] Because bilirubin is a skin irritant, jaundice is commonly associated with severe itchiness.[16][17]

Eye conjunctiva has a particularly high affinity for bilirubin deposition due to high elastin content. Slight increases in serum bilirubin can, therefore, be detected early on by observing the yellowing of sclerae. Traditionally referred to as scleral icterus, this term is actually a misnomer, because bilirubin deposition technically occurs in the conjunctival membranes overlying the avascular sclera. Thus, the proper term for the yellowing of "white of the eyes" is conjunctival icterus.[18]

A much less common sign of jaundice specifically during childhood is yellowish or greenish teeth. In developing children, hyperbilirubinemia may cause a yellow or green discoloration of teeth due to bilirubin deposition during the process of tooth calcification.[19] While this may occur in children with hyperbilirubinemia, tooth discoloration due to hyperbilirubinemia is not observed in individuals with adult-onset liver disease. Disorders associated with a rise in serum levels of conjugated bilirubin during early development can also cause dental hypoplasia.[20] 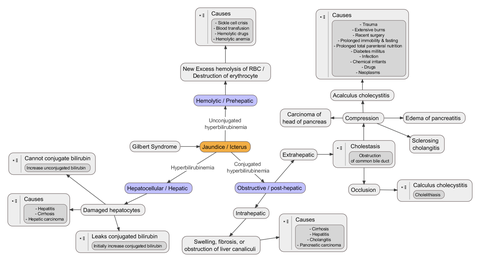 Jaundice is a sign indicating the presence of an underlying diseases involving abnormal bilirubin metabolism, liver dysfunction, or biliary-tract obstruction. In general, jaundice is present when blood levels of bilirubin exceed 3 mg/dl.[14] Jaundice is classified into three categories, depending on which part of the physiological mechanism the pathology affects. The three categories are: 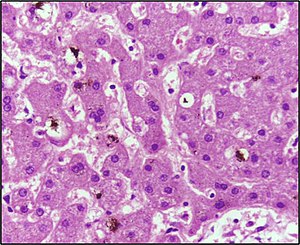 Hepatic jaundice is caused by abnormal liver metabolism of bilirubin.[27] The major causes of hepatic jaundice are significant damage to hepatocytes due to infectious, drug/medication-induced, autoimmune etiology, or less commonly, due to inheritable genetic diseases.[28] The following is a partial list of hepatic causes to jaundice:

Posthepatic jaundice (obstructive jaundice), is caused by a blockage of bile ducts that transport bile containing conjugated bilirubin out of the liver for excretion.[29] This is a list of conditions that can cause posthepatic jaundice:

Jaundice is typically caused by an underlying pathological process that occurs at some point along the normal physiological pathway of heme metabolism. A deeper understanding of the anatomical flow of normal heme metabolism is essential to appreciate the importance of prehepatic, hepatic, and posthepatic categories. Thus, an anatomical approach to heme metabolism precedes a discussion of the pathophysiology of jaundice.

When red blood cells complete their lifespan of about 120 days, or if they are damaged, they rupture as they pass through the reticuloendothelial system, and cell contents including hemoglobin are released into circulation. Macrophages phagocytose free hemoglobin and split it into heme and globin. Two reactions then take place with the heme molecule. The first oxidation reaction is catalyzed by the microsomal enzyme heme oxygenase and results in biliverdin (green color pigment), iron, and carbon monoxide. The next step is the reduction of biliverdin to a yellow color tetrapyrrole pigment called bilirubin by cytosolic enzyme biliverdin reductase. This bilirubin is "unconjugated", "free", or "indirect" bilirubin. Around 4 mg of bilirubin per kg of blood are produced each day.[31] The majority of this bilirubin comes from the breakdown of heme from expired red blood cells in the process just described. Roughly 20% comes from other heme sources, however, including ineffective erythropoiesis, and the breakdown of other heme-containing proteins, such as muscle myoglobin and cytochromes.[31] The unconjugated bilirubin then travels to the liver through the bloodstream. Because this bilirubin is not soluble, it is transported through the blood bound to serum albumin.

Abnormalities in heme metabolism and excretion

Most people presenting with jaundice have various predictable patterns of liver panel abnormalities, though significant variation does exist. The typical liver panel includes blood levels of enzymes found primarily from the liver, such as the aminotransferases (ALT, AST), and alkaline phosphatase (ALP); bilirubin (which causes the jaundice); and protein levels, specifically, total protein and albumin. Other primary lab tests for liver function include gamma glutamyl transpeptidase (GGT) and prothrombin time (PT).[36] No single test can differentiate between various classifications of jaundice. A combination of liver function tests and other physical examination findings is essential to arrive at a diagnosis.[37]

Some bone and heart disorders can lead to an increase in ALP and the aminotransferases, so the first step in differentiating these from liver problems is to compare the levels of GGT, which are only elevated in liver-specific conditions. The second step is distinguishing from biliary (cholestatic) or liver causes of jaundice and altered laboratory results. ALP and GGT levels typically rise with one pattern while aspartate aminotransferase (AST) and alanine aminotransferase (ALT) rise in a separate pattern. If the ALP (10–45 IU/l) and GGT (18–85 IU/l) levels rise proportionately as high as the AST (12–38 IU/l) and ALT (10–45 IU/l) levels, this indicates a cholestatic problem. If the AST and ALT rise is significantly higher than the ALP and GGT rise, though, this indicates a liver problem. Finally, distinguishing between liver causes of jaundice, comparing levels of AST and ALT can prove useful. AST levels typically are higher than ALT. This remains the case in most liver disorders except for hepatitis (viral or hepatotoxic). Alcoholic liver damage may have fairly normal ALT levels, with AST 10 times higher than ALT. If ALT is higher than AST, however, this is indicative of hepatitis. Levels of ALT and AST are not well correlated to the extent of liver damage, although rapid drops in these levels from very high levels can indicate severe necrosis. Low levels of albumin tend to indicate a chronic condition, while the level is normal in hepatitis and cholestasis.

Laboratory findings depend on the cause of jaundice:

Medical imaging such as ultrasound, CT scan, and HIDA scan are useful for detecting bile-duct blockage.[40]

Yellow discoloration of the skin, especially on the palms and the soles, but not of the sclera or inside the mouth, is often due to carotenemia—a harmless condition.[41]

Treatment of jaundice varies depending on the underlying cause.[5] If a bile duct blockage is present, surgery is typically required; otherwise, management is medical.[5][42][43][44]

Hyperbilirubinemia, more precisely hyperbilirubinemia due to the unconjugated fraction, may cause bilirubin to accumulate in the grey matter of the central nervous system, potentially causing irreversible neurological damage, leading to a condition known as kernicterus. Depending on the level of exposure, the effects range from unnoticeable to severe brain damage and even death. Newborns are especially vulnerable to hyperbilirubinemia-induced neurological damage, so must be carefully monitored for alterations in their serum bilirubin levels.

Individuals with parenchymal liver disease who have impaired hemostasis may develop bleeding problems.[45]

Jaundice in adults is rare.[46][47][48] Under the five year DISCOVERY programme in the UK, annual incidence of jaundice was 0.74 per 1000 individuals over age 45, although this rate may be slightly inflated due to the main goal of the programme collecting and analyzing cancer data in the population.[49] Jaundice is commonly associated with severity of disease with an incidence of up to 40% of patients requiring intensive care in ICU experiencing jaundice.[48] The causes of jaundice in the intensive care setting is both due to jaundice as the primary reason for ICU stay or as a morbidity to an underlying disease (i.e. sepsis).[48]

Jaundice in infants presents with yellowed skin and icteral sclerae. Neonatal jaundice spreads in a cephalocaudal pattern, affecting the face and neck before spreading down to the trunk and lower extremities in more severe cases.[51] Other symptoms may include drowsiness, poor feeding, and in severe cases, unconjugated bilirubin can cross the blood-brain barrier and cause permanent neurological damage (kernicterus).

The most common cause of jaundice in infants is normal physiologic jaundice. Pathologic causes of neonatal jaundice include:

Transient neonatal jaundice is one of the most common conditions occurring in newborns (children under 28 days of age) with more than 80 per cent experienceing jaundice during their first week of life.[53] Jaundice in infants, as in adults, is characterized by increased bilirubin levels (infants: total serum bilirubin greater than 5 mg/dL).

Normal physiological neonatal jaundice is due to immaturity of liver enzymes involved in bilirubin metabolism, immature gut microbiota, and increased breakdown of fetal hemoglobin (HbF).[54] Breast milk jaundice is caused by an increased concentration of β-glucuronidase in breast milk, which increases bilirubin deconjugation and reabsorption of bilirubin, leading to persistence of physiologic jaundice with unconjugated hyperbilirubinemia. Onset of breast milk jaundice is within 2 weeks after birth and lasts for 4–13 weeks.

While most cases of newborn jaundice are not harmful, when bilirubin levels are very high, brain damage — kernicterus — may occur[55][8] leading to significant disability.[56] Kernicterus is associated with increased unconjugated bilirubin (bilirubin which is not carried by albumin). Newborns are especially vulnerable to this damage, due to increased permeability of the blood–brain barrier occurring with increased unconjugated bilirubin, simultaneous to the breakdown of fetal hemoglobin and the immaturity of gut flora. This condition has been rising in recent years. as babies spend less time in sunlight.

Jaundice in newborns is usually transient and dissipates without medical intervention. In cases when serum bilirubin levels are greater than 4–21 mg/dl (68-360 μmol/l), infant may be treated with phototherapy or exchanged transfusion depending on the infant's age and prematurity status.[9] A bili light is often the tool used for early treatment, which often consists of exposing the baby to intensive phototherapy. A 2014 systematic review found no evidence indicating whether outcomes were different for hospital-based versus home-based treatment.[57] Sunbathing is effective treatment,[58][59] and has the advantage of ultra-violet-B, which promotes vitamin D production.[60] Bilirubin count is also lowered through excretion — bowel movements and urination —so frequent and effective feedings are vital measures to decrease jaundice in infants.[61]

Jaundice comes from the French jaune, meaning yellow, jaunisse meaning "yellow disease". The medical term for it is icterus from the Greek word ikteros.[62] The origin of the word icterus is quite bizarre, coming from an ancient belief that jaundice could be cured by looking at the yellow bird icteria.[63] The term icterus is sometimes incorrectly used to refer to jaundice specifically of sclera.[62][64]