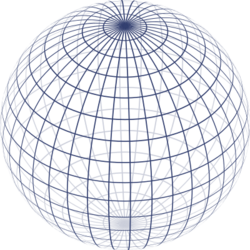 2-sphere wireframe as an orthogonal projection 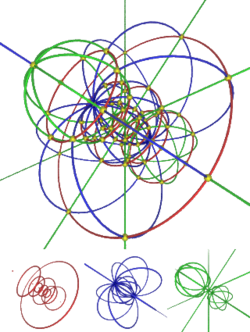 Just as a stereographic projection can project a sphere's surface to a plane, it can also project a 3-sphere into 3-space. This image shows three coordinate directions projected to 3-space: parallels (red), meridians (blue) and hypermeridians (green). Due to the conformal property of the stereographic projection, the curves intersect each other orthogonally (in the yellow points) as in 4D. All of the curves are circles: the curves that intersect ⟨0,0,0,1⟩ have an infinite radius (= straight line).

In mathematics, an n-sphere or a hypersphere is a topological space that is homeomorphic to a standard n-sphere, which is the set of points in (n + 1)-dimensional Euclidean space that are situated at a constant distance r from a fixed point, called the center. It is the generalization of an ordinary sphere in the ordinary three-dimensional space. The "radius" of a sphere is the constant distance of its points to the center. When the sphere has unit radius, it is usual to call it the unit n-sphere or simply the n-sphere for brevity. In terms of the standard norm, the n-sphere is defined as

and an n-sphere of radius r can be defined as

The dimension of n-sphere is n, and must not be confused with the dimension (n + 1) of the Euclidean space in which it is naturally embedded. An n-sphere is the surface or boundary of an (n + 1)-dimensional ball.

For n ≥ 2, the n-spheres that are differential manifolds can be characterized (up to a diffeomorphism) as the simply connected n-dimensional manifolds of constant, positive curvature. The n-spheres admit several other topological descriptions: for example, they can be constructed by gluing two n-dimensional Euclidean spaces together, by identifying the boundary of an n-cube with a point, or (inductively) by forming the suspension of an (n − 1)-sphere. The 1-sphere is the 1-manifold that is a circle, which is not simply connected. The 0-sphere is the 0-manifold, which is not even connected, consisting of two points.

The above n-sphere exists in (n + 1)-dimensional Euclidean space and is an example of an n-manifold. The volume form ω of an n-sphere of radius r is given by

where ∗ is the Hodge star operator; see (Flanders 1989) for a discussion and proof of this formula in the case r = 1. As a result,

Topologically, an n-sphere can be constructed as a one-point compactification of n-dimensional Euclidean space. Briefly, the n-sphere can be described as Sn = ℝn ∪ {∞}, which is n-dimensional Euclidean space plus a single point representing infinity in all directions. In particular, if a single point is removed from an n-sphere, it becomes homeomorphic to ℝn. This forms the basis for stereographic projection.[1]

Vn(R) and Sn(R) are the n-dimensional volume of the n-ball and the surface area of the n-sphere embedded in dimension n + 1, respectively, of radius R.

The constants Vn and Sn (for R = 1, the unit ball and sphere) are related by the recurrences:

The surfaces and volumes can also be given in closed form:

where Γ is the gamma function. Derivations of these equations are given in this section. 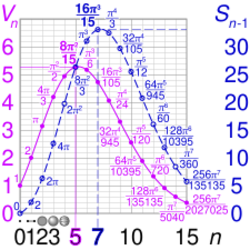 Graphs of volumes (V) and surface areas (S) of n-balls of radius 1. In [1], hover over a point to highlight it and its value.
In general, the volume of the n-ball in n-dimensional Euclidean space, and the surface area of the n-sphere in (n + 1)-dimensional Euclidean space, of radius R, are proportional to the nth power of the radius, R (with different constants of proportionality that vary with n). We write Vn(R) = VnRn for the volume of the n-ball and Sn(R) = SnRn for the surface area of the n-sphere, both of radius R, where Vn = Vn(1) and Sn = Sn(1) are the values for the unit-radius case.

The volume of the unit n-ball is maximal in dimension five, where it begins to decrease, and tends to zero as n tends to infinity.[2] Furthermore, the sum of the volumes of even-dimensional n-balls of radius R can be expressed in closed form:[2]

For the odd-dimensional analogue,

where erf is the error function.[3]

The 0-ball consists of a single point. The 0-dimensional Hausdorff measure is the number of points in a set. So,

The unit 1-sphere is the unit circle in the Euclidean plane, and this has circumference (1-dimensional measure)

The region enclosed by the unit 1-sphere is the 2-ball, or unit disc, and this has area (2-dimensional measure)

Analogously, in 3-dimensional Euclidean space, the surface area (2-dimensional measure) of the unit 2-sphere is given by

and the volume enclosed is the volume (3-dimensional measure) of the unit 3-ball, given by

The surface area, or properly the n-dimensional volume, of the n-sphere at the boundary of the (n + 1)-ball of radius R is related to the volume of the ball by the differential equation

or, equivalently, representing the unit n-ball as a union of concentric (n − 1)-sphere shells,

holds for all n.

This completes the derivation of the recurrences:

Combining the recurrences, we see that

So it is simple to show by induction on k that,

In general, the volume, in n-dimensional Euclidean space, of the unit n-ball, is given by

By multiplying Vn by Rn, differentiating with respect to R, and then setting R = 1, we get the closed form

The recurrences can be combined to give a "reverse-direction" recurrence relation for surface area, as depicted in the diagram: 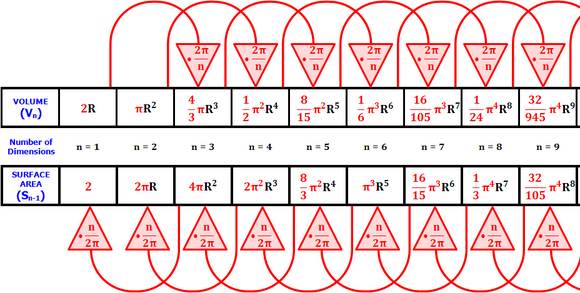 n refers to the dimension of the ambient Euclidean space, which is also the intrinsic dimension of the solid whose volume is listed here, but which is 1 more than the intrinsic dimension of the sphere whose surface area is listed here. The curved red arrows show the relationship between formulas for different n. The formula coefficient at each arrow's tip equals the formula coefficient at that arrow's tail times the factor in the arrowhead (where the n in the arrowhead refers to the n value that the arrowhead points to). If the direction of the bottom arrows were reversed, their arrowheads would say to multiply by 2π/n − 2. Alternatively said, the surface area Sn+1 of the sphere in n + 2 dimensions is exactly 2πR times the volume Vn enclosed by the sphere in n dimensions.

Index-shifting n to n − 2 then yields the recurrence relations:

The recurrence relation for Vn can also be proved via integration with 2-dimensional polar coordinates:

Except in the special cases described below, the inverse transformation is unique:

There are some special cases where the inverse transform is not unique; φk for any k will be ambiguous whenever all of xk, xk+1, ... xn are zero; in this case φk may be chosen to be zero.

To express the volume element of n-dimensional Euclidean space in terms of spherical coordinates, first observe that the Jacobian matrix of the transformation is:

The formula for the volume of the n-ball can be derived from this by integration.

The natural choice of an orthogonal basis over the angular coordinates is a product of ultraspherical polynomials,

The standard spherical coordinate system arises from writing ℝn as the product ℝ × ℝn − 1. These two factors may be related using polar coordinates. For each point x of ℝn, the standard Cartesian coordinates

can be transformed into a mixed polar–Cartesian coordinate system:

Polyspherical coordinate systems arise from a generalization of this construction.[5] The space ℝn is split as the product of two Euclidean spaces of smaller dimension, but neither space is required to be a line. Specifically, suppose that p and q are positive integers such that n = p + q. Then ℝn = ℝp × ℝq. Using this decomposition, a point x ∈ ℝn may be written as

This can be transformed into a mixed polar–Cartesian coordinate system by writing:

Polyspherical coordinates also have an interpretation in terms of the special orthogonal group. A splitting ℝn = ℝp × ℝq determines a subgroup

This is the subgroup that leaves each of the two factors [math]\displaystyle{ S^{p-1} \times S^{q-1} \subseteq S^{n-1} }[/math] fixed. Choosing a set of coset representatives for the quotient is the same as choosing representative angles for this step of the polyspherical coordinate decomposition.

where the factors Fi are determined by the tree. Similarly, the volume measure is

Suppose we have a node of the tree that corresponds to the decomposition ℝn1 + n2 = ℝn1 × ℝn2 and that has angular coordinate θ. The corresponding factor F depends on the values of n1 and n2. When the area measure is normalized so that the area of the sphere is 1, these factors are as follows. If n1 = n2 = 1, then

Finally, if both n1 and n2 are greater than one, then

Likewise, the stereographic projection of an n-sphere Sn of radius 1 will map to the (n − 1)-dimensional hyperplane ℝn−1 perpendicular to the xn-axis as

Uniformly at random on the (n − 1)-sphere 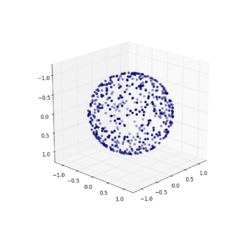 A set of uniformly distributed points on the surface of a unit 2-sphere generated using Marsaglia's algorithm.

To generate uniformly distributed random points on the unit (n − 1)-sphere (that is, the surface of the unit n-ball), (Marsaglia 1972) gives the following algorithm.

Generate an n-dimensional vector of normal deviates (it suffices to use N(0, 1), although in fact the choice of the variance is arbitrary), x = (x1, x2,... xn). Now calculate the "radius" of this point:

The vector 1/rx is uniformly distributed over the surface of the unit n-ball.

An alternative given by Marsaglia is to uniformly randomly select a point x = (x1, x2,... xn) in the unit n-cube by sampling each xi independently from the uniform distribution over (–1,1), computing r as above, and rejecting the point and resampling if r ≥ 1 (i.e., if the point is not in the n-ball), and when a point in the ball is obtained scaling it up to the spherical surface by the factor 1/r; then again 1/rx is uniformly distributed over the surface of the unit n-ball. This method becomes very inefficient for higher dimensions, as a vanishingly small fraction of the unit cube is contained in the sphere. In ten dimensions, less than 2% of the cube is filled by the sphere, so that typically more than 50 attempts will be needed. In seventy dimensions, less than [math]\displaystyle{ 10^{-24} }[/math] of the cube is filled, meaning typically a trillion quadrillion trials will be needed, far more than a computer could ever carry out.

Uniformly at random within the n-ball

If n is sufficiently large, most of the volume of the n-ball will be contained in the region very close to its surface, so a point selected from that volume will also probably be close to the surface. This is one of the phenomena leading to the so-called curse of dimensionality that arises in some numerical and other applications.

0-sphere
The pair of points {±R} with the discrete topology for some R > 0. The only sphere that is not path-connected. Parallelizable.
1-sphere
Commonly called a circle. Has a nontrivial fundamental group. Abelian Lie group structure U(1); the circle group. Homeomorphic to the real projective line.
2-sphere
Commonly simply called a sphere. For its complex structure, see Riemann sphere. Equivalent[clarification needed] to the complex projective line
3-sphere
Parallelizable, principal U(1)-bundle over the 2-sphere, Lie group structure Sp(1).
4-sphere
Equivalent to the quaternionic projective line, HP1. SO(5)/SO(4).
5-sphere
Principal U(1)-bundle over CP2. SO(6)/SO(5) = SU(3)/SU(2). It is undecidable if a given n-dimensional manifold is homeomorphic to Sn for n ≥ 5.[7]
6-sphere
Possesses an almost complex structure coming from the set of pure unit octonions. SO(7)/SO(6) = G2/SU(3). The question of whether it has a complex structure is known as the Hopf problem, after Heinz Hopf.[8]
7-sphere
Topological quasigroup structure as the set of unit octonions. Principal Sp(1)-bundle over S4. Parallelizable. SO(8)/SO(7) = SU(4)/SU(3) = Sp(2)/Sp(1) = Spin(7)/G2 = Spin(6)/SU(3). The 7-sphere is of particular interest since it was in this dimension that the first exotic spheres were discovered.
8-sphere
Equivalent to the octonionic projective line OP1.
23-sphere
A highly dense sphere-packing is possible in 24-dimensional space, which is related to the unique qualities of the Leech lattice.