350.org is an international environmental organization addressing the climate crisis. Its stated goal is to end the use of fossil fuels and transition to renewable energy by building a global, grassroots movement.[1]

Through online campaigns, grassroots organizing, mass public actions, and collaboration with an extensive network of partner groups and organizations, 350.org has mobilized thousands of volunteer organizers in over 188 countries. It is one of the many organizers of the Global Climate Strike from September 20 to 27, 2019 which evolved from the Fridays for Future movement.

350.org runs a variety of campaigns, from the local to the global scale.

The fossil fuel divestment campaign, also known as "Fossil Free", borrows activist tactics from other social movements, notably the successful movement against apartheid in South Africa. Since its inception in 2012, over 1110 institutions with more than US$11 trillion in assets under management have committed to divest from fossil fuels.[6] 350.org explains that the reasoning behind this campaign is simple: "If it is wrong to wreck the climate, then it is wrong to profit from that wreckage."[7] 350.org states their demand as the following "We want institutions to immediately freeze any new investment in fossil fuel companies, and divest from direct ownership and any commingled funds that include fossil fuel public equities and corporate bonds.”

The campaign has grown from colleges and universities around the United States to now include other kinds of public and private institutions, such as the City of New York, major Japanese banks, development banks, religious institutions and more. Campaigns for divestment are active and growing around the world.

350.org cites oil spills along the proposed pipeline route, which would pass near Texas' Carrizo-Wilcox Aquifer, which supplies drinking water to more than 12 million people. It could also pose danger to the Ogallala Aquifer, the largest aquifer in western North America that supplies drinking water and irrigation to millions of people and agricultural businesses.[9] 350.org has opposed the economic argument that has been made by proponents of the pipeline, arguing that Keystone XL would create only a few thousand temporary jobs during construction. The State Department estimated that ultimately the pipeline will create 35 permanent jobs.[10]

Contrary to oil industry claims, the Natural Resources Defense Council (NRDC) has said that the Keystone XL pipeline will increase gas prices instead of lowering them. The NRDC's study also refutes the claim that the pipeline will lead to energy independence, because the pipeline will carry tar sands from Canada to Texas which will then be sold on the global market.[11]

Partly due to efforts from 350.org and other organizations, President Obama officially rejected the building of Keystone XL on November 6, 2015.[12] This marked the end of a seven-year review on the pipeline. Speaking on the decision, Bill McKibben said, “President Obama is the first world leader to reject a project because of its effect on the climate. That gives him new stature as an environmental leader, and it eloquently confirms the five years and millions of hours of work that people of every kind put into this fight.”[12]

Local campaigns in jurisdictions around the world have passed laws limiting or banning fossil fuel production. These include 410 municipal bans for fracking in Brazil and two state bans: Santa Catarina and Paraná. 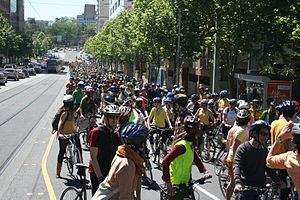 Thousands of Cyclists in Melbourne for the 350 Climate Protest, October 24, 2009 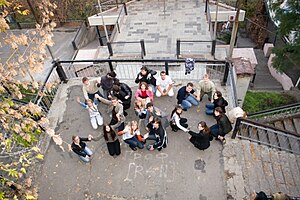 An "International Day of Climate Action" on October 24, 2009, was organized by 350.org to influence the delegates going to the United Nations Framework Convention on Climate Change meeting in December, 2009 (COP15).[13][14] This was the first global campaign ever organized around a scientific data point.[15] The actions organised by 350.org included gigantic depictions of the number "350",[16][17] walks,[18][19] marches, rallies, teach-ins, bike rides, sing-a-thons, carbon-free dinners, retrofitting houses to save energy,[20] tree plantings,[21] mass dives at the Great Barrier Reef, solar-cooked bake-outs, churches bell ringings, underwater cabinet meetings (Maldives),[22][23] and armband distributions to athletes.[24][25][26] The organization reported that over 5,200 synchronized demonstrations occurred in 181 countries on the day.[27][28][29] The group reports that they organised the world's "most widespread day of political action" on Saturday October 24, 2009, reporting 5,245 actions in 181 countries.[30][31][32] 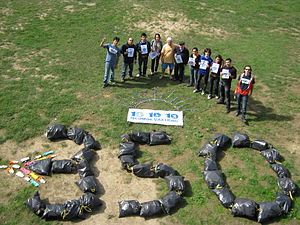 As a follow-up to 2009's International Day of Climate Action, 350.org and the 10:10 Climate Campaign joined to help coordinate another global day of action which occurred on October 10, 2010. The 2010 campaign was focused on concrete actions that can be taken locally to help combat climate change. Actions from tree-plantings to solar panel installations to huge electricity service-provider switching parties occurred in almost every country around the world.[33][34][35]

The organization's efforts continued into 2012 with a planned May 5 worldwide series of rallies under the slogan "Connect the Dots," to draw attention to the links between climate change and extreme weather.[36][37] Per the 350.org website the day is called Climate Impacts Day.[38][39]

Phase 1 of Global Power Shift was a convergence in Istanbul, Turkey in June 2013 of about five-hundred climate organizers from 135 countries. Stated objectives include sharing and developing skills to organize movements, building upon existing plans to organize in-country Power Shift events after the kickoff event in Turkey, building political alignment and a clear theory of change, sharing experiences from different countries, formulating strategies to overcome challenges, and building relationships to strengthen regional and international cooperation and collaboration.[40] Phase 2 of Global Power Shift involves the organizers who were in Turkey in June 2013 to bring home what they learned to organize summits, events, and mobilizations

350.org launched the Summer Heat campaign in the Summer of 2013, and was a wave of mass mobilizations across the country. Summer Heat actions took place at eleven locations: Richmond, CA; Vancouver, WA; Green River, UT; Albuquerque, NM; Houston, TX; St. Ignace, MI; Warren, OH; Washington, D.C.; Camp David, MD; Somerset, MA; and Sebago Lake, ME. Participants included grassroots organizers, labor unions, farmers, ranchers, environmental justice groups, and others. The slogan that was used for the Summer Heat campaign was: As The Temperature Rises, So Do We.[41]

350.org is one of the leading organizers of the Global Climate Strike, September 20–27, 2019. Strike actions are planned in more than 150 countries. Worn by a broad coalition of NGOs, unions and social movements, the strikes were inspired by the school strikes of the Fridays For Future movement. Also supported is the digital climate strike, which calls for a shutdown or 'go green' of websites with redirection to coverage of the physical mobilizations.

The aim of the Global Climate Strike is to draw attention to the emergency climate crisis and to create pressure on politics, the media and the fossil fuel industry. The strikes are intended as a prelude to a permanent mass mobilization.

Over 7.6 million people across 185 countries participated in this mass mobilization event, making the Global Climate Strike the largest climate mobilization in history.[44]

Apart from special events, 350.org organizes actions on an ongoing basis to promote its message. These activities include tree plantings (350 trees in each instance) for biosequestration,[45][46][47][48][49][50] promoting the term "350",[51][52][53][54][55] publishing adverts in major newspapers calling for the target level of carbon dioxide to be lowered to 350ppm,[56] conducting polls on the subject of climate change,[57][58] educating youth leaders,[59][60] lobbying governments on the issue of carbon targets,[61] and joining a campaign to establish a .eco top-level domain or "tld".[62] In December 2009, the group petitioned the United States Environmental Protection Agency to set national limits for greenhouse gases using the Clean Air Act, asking the agency to cap atmospheric concentrations of carbon dioxide at 350 parts per million.[63] The organization created and distributed a time-lapse video showing the recent retreat of Mendenhall Glacier in Alaska , graphically depicting the impacts of warming climates.[64]

Rise: From One Island To Another

Immediately after the 2018 Rise for Climate Mobilization, 350.org together with Dan Lin produced "Rise: From One Island to Another", described as a "poetic expedition between two islanders" who share their parallel experiences dealing with climate crisis in Greenland and the Marshall Islands.

Do The Math movie

The Do The Math movie is a 42-minute documentary film about the rising movement to change the terrifying math of the climate crisis and challenge the fossil fuel industry. The math revolves around these three numbers: to stay below 2 degrees Celsius of global warming we can emit only 565 more gigatons of carbon dioxide versus the 2,795 gigatons held in proven reserves by fossil fuel corporations. This warming rise was agreed to in the 2009 Copenhagen Summit as a limit. NASA scientist James Hansen says "2 degrees of warming is actually a prescription for long-term disaster."[65]

The founder of 350.org, Bill McKibben, speaking at the Rochester Institute of Technology in 2008.

350.org was founded by American environmentalist Bill McKibben and a group of students from Middlebury College in Vermont. Their 2007 "Step It Up" campaign involved 1,400 demonstrations at famous sites across the United States. McKibben credits these activities with making Hillary Clinton and Barack Obama change their energy policies during the 2008 United States presidential campaign. Starting in 2008, 350.org built upon the "Step It Up" campaign and made it into a global organization.

McKibben is an American environmentalist and writer who wrote one of the first books on global warming for the general public, and frequently writes about climate change, alternative energy, and the need for more localized economies.

Rajendra Pachauri, the UN's "top climate scientist" and leader of the Intergovernmental Panel on Climate Change (IPCC) has come out, as have others, in favor of reducing atmospheric concentrations of carbon dioxide to 350 ppm.[66][67][68] McKibben called news of Pachauri's embrace of the 350ppm target "amazing".[69] Some media have indicated that Pachauri's endorsement of the 350 ppm target was a victory for 350.org's activism.[70][71]

The organization had a lift in prominence after McKibben appeared on The Colbert Report television show on Monday August 17, 2009.[72][73][74] McKibben promotes the organization on speaking tours and by writing articles about it for many major newspapers and media, such as the Los Angeles Times [75] and The Guardian .[76] In 2012 the organization was presented with the 2012 Katerva Award for Behavioural Change.[77]

NASA climate scientist James Hansen contended that any atmospheric concentration of CO2 above 350 parts per million was unsafe. James Hansen opined in 2009 that "if humanity wishes to preserve a planet similar to that on which civilization developed and to which life on Earth is adapted, paleoclimate evidence and ongoing climate change suggest that CO2 will need to be reduced from its current 400 ppm to at most 350 ppm, but likely less than that."[78] Carbon dioxide, the main greenhouse gas, rose by 2.6 parts per million to 396 ppm in 2013 from the previous year (annual global averages).[79] In May 2013, two independent teams of scientists measuring CO2 near the summit of Mauna Loa in Hawaii recorded that the amount of carbon dioxide in the atmosphere exceeded 400 parts per million, probably for the first time in more than 3 million years of Earth history.[80] It crossed 415 ppm in May 2019 and the amount continues to rise.[81]

2 °C (3.6 °F) was agreed upon during the 2009 Copenhagen Accord as a limit for global temperature rise. In the 2015 Paris Agreement, 1.5˚C of warming was introduced as a limit, reflecting the significant difference in impacts between 2˚C and 1.5˚C, especially for climate-vulnerable areas. This was re-affirmed in the 2018 report by the Intergovernmental Panel on Climate Change, where the world's leading scientists urged action to limit warming to 1.5˚C. In order to stay below a 2˚C increase, scientists have estimated that humans can pour roughly 565 more gigatons of carbon dioxide into the atmosphere.

Fossil-fuel companies have about 2,795 gigatons of carbon already contained in their proven coal and oil and gas reserves, and is the amount of fossil fuels they are currently planning to burn. 2,795 gigatons is five times higher than the limit of 565 gigatons that would keep Earth under a global temperature increase of 2 degrees Celsius[82] which is already unsafe according to the latest science.

350.org claims alliance with 300 organizations around the world[83][84] Many notable figures have publicly allied themselves with the organization or its goal to spread the movement,[20][85] including Archbishop Desmond Tutu, Alex Steffen,[86][87] Bianca Jagger, David Suzuki, and Colin Beavan.[88]

Naomi Klein (author of This Changes Everything: Capitalism vs. the Climate) is a member of the board of directors of 350.org.