SLAC National Accelerator Laboratory, originally named Stanford Linear Accelerator Center,[2][3] is a United States Department of Energy National Laboratory operated by Stanford University under the programmatic direction of the U.S. Department of Energy Office of Science and located in Menlo Park, California. It is the site of the Stanford Linear Accelerator, a 3.2 kilometer (2-mile) linear accelerator constructed in 1966 and shut down in the 2000s, which could accelerate electrons to energies of 50 GeV.

Today SLAC research centers on a broad program in atomic and solid-state physics, chemistry, biology, and medicine using X-rays from synchrotron radiation and a free-electron laser as well as experimental and theoretical research in elementary particle physics, astroparticle physics, and cosmology. 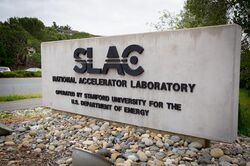 The entrance to SLAC in Menlo Park

Founded in 1962 as the Stanford Linear Accelerator Center, the facility is located on 172 hectares (426 acres) of Stanford University-owned land on Sand Hill Road in Menlo Park, California—just west of the University's main campus. The main accelerator is 3.2 kilometers (2 mi) long—the longest linear accelerator in the world—and has been operational since 1966. 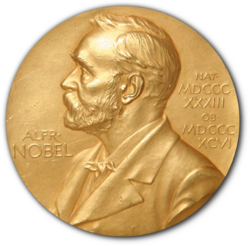 Research at SLAC has produced three Nobel Prizes in Physics

Research at SLAC has produced three Nobel Prizes in Physics:

SLAC's meeting facilities also provided a venue for the Homebrew Computer Club and other pioneers of the home computer revolution of the late 1970s and early 1980s.

In 1984 the laboratory was named an ASME National Historic Engineering Landmark and an IEEE Milestone.[7]

SLAC developed and, in December 1991, began hosting the first World Wide Web server outside of Europe.[8]

In the early-to-mid 1990s, the Stanford Linear Collider (SLC) investigated the properties of the Z boson using the Stanford Large Detector.

As of 2005, SLAC employed over 1,000 people, some 150 of whom were physicists with doctorate degrees, and served over 3,000 visiting researchers yearly, operating particle accelerators for high-energy physics and the Stanford Synchrotron Radiation Laboratory (SSRL) for synchrotron light radiation research, which was "indispensable" in the research leading to the 2006 Nobel Prize in Chemistry awarded to Stanford Professor Roger D. Kornberg.[9]

In October 2008, the Department of Energy announced that the center's name would be changed to SLAC National Accelerator Laboratory. The reasons given include a better representation of the new direction of the lab and the ability to trademark the laboratory's name. Stanford University had legally opposed the Department of Energy's attempt to trademark "Stanford Linear Accelerator Center".[2][10]

In March 2009, it was announced that the SLAC National Accelerator Laboratory was to receive $68.3 million in Recovery Act Funding to be disbursed by Department of Energy's Office of Science.[11]

In October 2016, Bits and Watts launched as a collaboration between SLAC and Stanford University to design "better, greener electric grids". SLAC later pulled out over concerns about an industry partner, the state-owned Chinese electric utility.[12] 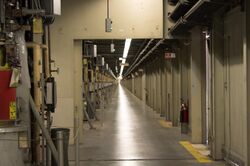 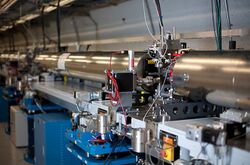 Part of the SLAC beamline

The main accelerator was an RF linear accelerator that accelerated electrons and positrons up to 50 GeV. At 3.2 km (2.0 mi) long, the accelerator was the longest linear accelerator in the world, and was claimed to be "the world's most straight object."[13] until 2017 when the European x-ray free electron laser opened. The main accelerator is buried 9 m (30 ft) below ground[14] and passes underneath Interstate Highway 280. The above-ground klystron gallery atop the beamline, was the longest building in the United States until the LIGO project's twin interferometers were completed in 1999. It is easily distinguishable from the air and is marked as a visual waypoint on aeronautical charts.[15]

A portion of the original linear accelerator is now part of the Linac Coherent Light Source. 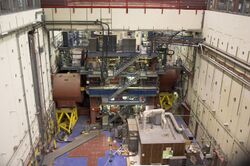 The Stanford Linear Collider was a linear accelerator that collided electrons and positrons at SLAC.[16] The center of mass energy was about 90 GeV, equal to the mass of the Z boson, which the accelerator was designed to study. Grad student Barrett D. Milliken discovered the first Z event on 12 April 1989 while poring over the previous day's computer data from the Mark II detector.[17] The bulk of the data was collected by the SLAC Large Detector, which came online in 1991. Although largely overshadowed by the Large Electron–Positron Collider at CERN, which began running in 1989, the highly polarized electron beam at SLC (close to 80%[18]) made certain unique measurements possible, such as parity violation in Z Boson-b quark coupling.[19]

Presently no beam enters the south and north arcs in the machine, which leads to the Final Focus, therefore this section is mothballed to run beam into the PEP2 section from the beam switchyard. 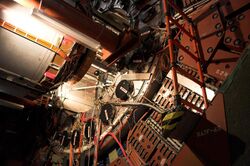 Inside view of the SLD

The SLAC Large Detector (SLD) was the main detector for the Stanford Linear Collider. It was designed primarily to detect Z bosons produced by the accelerator's electron-positron collisions. Built in 1991, the SLD operated from 1992 to 1998.[20]

PEP (Positron-Electron Project) began operation in 1980, with center-of-mass energies up to 29 GeV. At its apex, PEP had five large particle detectors in operation, as well as a sixth smaller detector. About 300 researchers made used of PEP. PEP stopped operating in 1990, and PEP-II began construction in 1994.[21]

From 1999 to 2008, the main purpose of the linear accelerator was to inject electrons and positrons into the PEP-II accelerator, an electron-positron collider with a pair of storage rings 2.2 km (1.4 mi) in circumference. PEP-II was host to the BaBar experiment, one of the so-called B-Factory experiments studying charge-parity symmetry.

The Stanford Synchrotron Radiation Lightsource (SSRL) is a synchrotron light user facility located on the SLAC campus. Originally built for particle physics, it was used in experiments where the J/ψ meson was discovered. It is now used exclusively for materials science and biology experiments which take advantage of the high-intensity synchrotron radiation emitted by the stored electron beam to study the structure of molecules. In the early 1990s, an independent electron injector was built for this storage ring, allowing it to operate independently of the main linear accelerator. 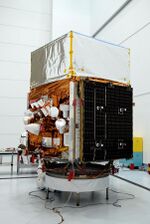 SLAC plays a primary role in the mission and operation of the Fermi Gamma-ray Space Telescope, launched in August 2008. The principal scientific objectives of this mission are:

The Kavli Institute for Particle Astrophysics and Cosmology (KIPAC) is partially housed on the grounds of SLAC, in addition to its presence on the main Stanford campus.

The Stanford PULSE Institute (PULSE) is a Stanford Independent Laboratory located in the Central Laboratory at SLAC. PULSE was created by Stanford in 2005 to help Stanford faculty and SLAC scientists develop ultrafast x-ray research at LCLS. PULSE research publications can be viewed here.

The Linac Coherent Light Source (LCLS) is a free electron laser facility located at SLAC. The LCLS is partially a reconstruction of the last 1/3 of the original linear accelerator at SLAC, and can deliver extremely intense x-ray radiation for research in a number of areas. It achieved first lasing in April 2009.[22]

Aerial photo of the Stanford Linear Accelerator Center, showing the 3.2 kilometer (2-mile) building housing the accelerator beamline, which passes under Interstate 280. The detector complex is visible to the east, on the right side

The laser produces hard X-rays, 109 times the relative brightness of traditional synchrotron sources and is the most powerful x-ray source in the world. LCLS enables a variety of new experiments and provides enhancements for existing experimental methods. Often, x-rays are used to take "snapshots" of objects at the atomic level before obliterating samples. The laser's wavelength, ranging from 6.2 to 0.13 nm (200 to 9500 electron volts (eV))[23][24] is similar to the width of an atom, providing extremely detailed information that was previously unattainable.[25] Additionally, the laser is capable of capturing images with a "shutter speed" measured in femtoseconds, or million-billionths of a second, necessary because the intensity of the beam is often high enough so that the sample explodes on the femtosecond timescale.[26][23]

The LCLS-II project is to provide a major upgrade to LCLS by adding two new X-ray laser beams. The new system will utilize the 500 m (1,600 ft) of existing tunnel to add a new superconducting accelerator at 4 GeV and two new sets of undulators that will increase the available energy range of LCLS. The advancement from the discoveries using this new capabilities may include new drugs, next-generation computers, and new materials.[27]

In 2012, the first two-thirds (~2 km) of the original SLAC LINAC were recommissioned for a new user facility, the Facility for Advanced Accelerator Experimental Tests (FACET). This facility was capable of delivering 20 GeV, 3 nC electron (and positron) beams with short bunch lengths and small spot sizes, ideal for beam-driven plasma acceleration studies.[28] The facility ended operations in 2016 for the constructions of LCLS-II which will occupy the first third of the SLAC LINAC. The FACET-II project will re-establish electron and positron beams in the middle third of the LINAC for the continuation of beam-driven plasma acceleration studies in 2019.

The Next Linear Collider Test Accelerator (NLCTA) is a 60-120 MeV high-brightness electron beam linear accelerator used for experiments on advanced beam manipulation and acceleration techniques. It is located at SLAC's end station B. A list of relevant research publications can be viewed here.