Short description: Category of disciplines and sub-disciplines in Physics

Experimental physics is the category of disciplines and sub-disciplines in the field of physics that are concerned with the observation of physical phenomena and experiments. Methods vary from discipline to discipline, from simple experiments and observations, such as Galileo's experiments, to more complicated ones, such as the Large Hadron Collider. 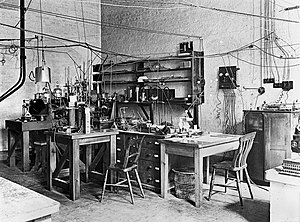 Experimental physics encompasses all the disciplines of physics that are concerned with data acquisition, data-acquisition methods, and the detailed conceptualization (beyond simple thought experiments) and realization of laboratory experiments. It is often contrasted with theoretical physics, which is more concerned with predicting and explaining the physical behaviour of nature than the acquisition of empirical data.

Although experimental and theoretical physics are concerned with different aspects of nature, they both share the same goal of understanding it and have a symbiotic relationship. The former provides data about the universe, which can then be analyzed in order to be understood, while the latter provides explanations for the data and thus offers insight into how to better acquire data and set up experiments. Theoretical physics can also offer insight into what data is needed in order to gain a better understanding of the universe, and into what experiments to devise in order to obtain it.

As a distinct field, experimental physics was established in early modern Europe, during what is known as the Scientific Revolution, by physicists such as Galileo Galilei, Christiaan Huygens, Johannes Kepler, Blaise Pascal and Sir Isaac Newton. In the early 17th century, Galileo made extensive use of experimentation to validate physical theories, which is the key idea in the modern scientific method. Galileo formulated and successfully tested several results in dynamics, in particular the law of inertia, which later became the first law in Newton's laws of motion. In Galileo's Two New Sciences, a dialogue between the characters Simplicio and Salviati discuss the motion of a ship (as a moving frame) and how that ship's cargo is indifferent to its motion. Huygens used the motion of a boat along a Dutch canal to illustrate an early form of the conservation of momentum.

Experimental physics is considered to have reached a high point with the publication of the Philosophiae Naturalis Principia Mathematica in 1687 by Sir Isaac Newton (1643–1727). In 1687, Newton published the Principia, detailing two comprehensive and successful physical laws: Newton's laws of motion, from which arise classical mechanics; and Newton's law of universal gravitation, which describes the fundamental force of gravity. Both laws agreed well with experiment. The Principia also included several theories in fluid dynamics.

From the late 17th century onward, thermodynamics was developed by physicist and chemist Boyle, Young, and many others. In 1733, Bernoulli used statistical arguments with classical mechanics to derive thermodynamic results, initiating the field of statistical mechanics. In 1798, Thompson demonstrated the conversion of mechanical work into heat, and in 1847 Joule stated the law of conservation of energy, in the form of heat as well as mechanical energy. Ludwig Boltzmann, in the nineteenth century, is responsible for the modern form of statistical mechanics.

Besides classical mechanics and thermodynamics, another great field of experimental inquiry within physics was the nature of electricity. Observations in the 17th and eighteenth century by scientists such as Robert Boyle, Stephen Gray, and Benjamin Franklin created a foundation for later work. These observations also established our basic understanding of electrical charge and current. By 1808 John Dalton had discovered that atoms of different elements have different weights and proposed the modern theory of the atom.

It was Hans Christian Ørsted who first proposed the connection between electricity and magnetism after observing the deflection of a compass needle by a nearby electric current. By the early 1830s Michael Faraday had demonstrated that magnetic fields and electricity could generate each other. In 1864 James Clerk Maxwell presented to the Royal Society a set of equations that described this relationship between electricity and magnetism. Maxwell's equations also predicted correctly that light is an electromagnetic wave. Starting with astronomy, the principles of natural philosophy crystallized into fundamental laws of physics which were enunciated and improved in the succeeding centuries. By the 19th century, the sciences had segmented into multiple fields with specialized researchers and the field of physics, although logically pre-eminent, no longer could claim sole ownership of the entire field of scientific research. 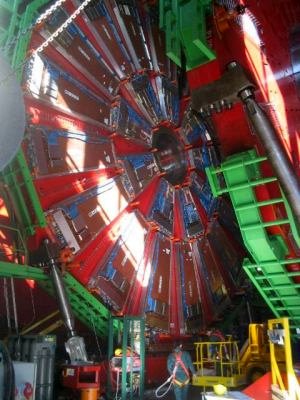 A view of the CMS detector, an experimental endeavour of the LHC at CERN.

Some examples of prominent experimental physics projects are:

Some well-known experimental techniques include:

See the timelines below for listings of physics experiments.