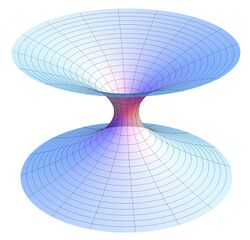 Visual representation of a Schwarzschild wormhole. Wormholes have never been observed, but they are predicted to exist through mathematical models and scientific theory.

Theoretical physics is a branch of physics that employs mathematical models and abstractions of physical objects and systems to rationalize, explain and predict natural phenomena. This is in contrast to experimental physics, which uses experimental tools to probe these phenomena.

The advancement of science generally depends on the interplay between experimental studies and theory. In some cases, theoretical physics adheres to standards of mathematical rigour while giving little weight to experiments and observations.[lower-alpha 1] For example, while developing special relativity, Albert Einstein was concerned with the Lorentz transformation which left Maxwell's equations invariant, but was apparently uninterested in the Michelson–Morley experiment on Earth's drift through a luminiferous aether.[1] Conversely, Einstein was awarded the Nobel Prize for explaining the photoelectric effect, previously an experimental result lacking a theoretical formulation.[2]

A physical theory involves one or more relationships between various measurable quantities. Archimedes realized that a ship floats by displacing its mass of water, Pythagoras understood the relation between the length of a vibrating string and the musical tone it produces.[5][6] Other examples include entropy as a measure of the uncertainty regarding the positions and motions of unseen particles and the quantum mechanical idea that (action and) energy are not continuously variable.

Theoretical physics consists of several different approaches. In this regard, theoretical particle physics forms a good example. For instance: "phenomenologists" might employ (semi-) empirical formulas and heuristics to agree with experimental results, often without deep physical understanding.[lower-alpha 3] "Modelers" (also called "model-builders") often appear much like phenomenologists, but try to model speculative theories that have certain desirable features (rather than on experimental data), or apply the techniques of mathematical modeling to physics problems.[lower-alpha 4] Some attempt to create approximate theories, called effective theories, because fully developed theories may be regarded as unsolvable or too complicated. Other theorists may try to unify, formalise, reinterpret or generalise extant theories, or create completely new ones altogether.[lower-alpha 5] Sometimes the vision provided by pure mathematical systems can provide clues to how a physical system might be modeled;[lower-alpha 6] e.g., the notion, due to Riemann and others, that space itself might be curved. Theoretical problems that need computational investigation are often the concern of computational physics.

Theoretical advances may consist in setting aside old, incorrect paradigms (e.g., aether theory of light propagation, caloric theory of heat, burning consisting of evolving phlogiston, or astronomical bodies revolving around the Earth) or may be an alternative model that provides answers that are more accurate or that can be more widely applied. In the latter case, a correspondence principle will be required to recover the previously known result.[7][8] Sometimes though, advances may proceed along different paths. For example, an essentially correct theory may need some conceptual or factual revisions; atomic theory, first postulated millennia ago (by several thinkers in Greece and India) and the two-fluid theory of electricity[9] are two cases in this point. However, an exception to all the above is the wave–particle duality, a theory combining aspects of different, opposing models via the Bohr complementarity principle. 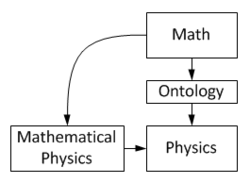 Relationship between mathematics and physics

Physical theories become accepted if they are able to make correct predictions and no (or few) incorrect ones. The theory should have, at least as a secondary objective, a certain economy and elegance (compare to mathematical beauty), a notion sometimes called "Occam's razor" after the 13th-century English philosopher William of Occam (or Ockham), in which the simpler of two theories that describe the same matter just as adequately is preferred (but conceptual simplicity may mean mathematical complexity).[10] They are also more likely to be accepted if they connect a wide range of phenomena. Testing the consequences of a theory is part of the scientific method.

Theoretical physics began at least 2,300 years ago, under the Pre-socratic philosophy, and continued by Plato and Aristotle, whose views held sway for a millennium. During the rise of medieval universities, the only acknowledged intellectual disciplines were the seven liberal arts of the Trivium like grammar, logic, and rhetoric and of the Quadrivium like arithmetic, geometry, music and astronomy. During the Middle Ages and Renaissance, the concept of experimental science, the counterpoint to theory, began with scholars such as Ibn al-Haytham and Francis Bacon. As the Scientific Revolution gathered pace, the concepts of matter, energy, space, time and causality slowly began to acquire the form we know today, and other sciences spun off from the rubric of natural philosophy. Thus began the modern era of theory with the Copernican paradigm shift in astronomy, soon followed by Johannes Kepler's expressions for planetary orbits, which summarized the meticulous observations of Tycho Brahe; the works of these men (alongside Galileo's) can perhaps be considered to constitute the Scientific Revolution.

The great push toward the modern concept of explanation started with Galileo, one of the few physicists who was both a consummate theoretician and a great experimentalist. The analytic geometry and mechanics of Descartes were incorporated into the calculus and mechanics of Isaac Newton, another theoretician/experimentalist of the highest order, writing Principia Mathematica.[11] In it contained a grand synthesis of the work of Copernicus, Galileo and Kepler; as well as Newton's theories of mechanics and gravitation, which held sway as worldviews until the early 20th century. Simultaneously, progress was also made in optics (in particular colour theory and the ancient science of geometrical optics), courtesy of Newton, Descartes and the Dutchmen Snell and Huygens. In the 18th and 19th centuries Joseph-Louis Lagrange, Leonhard Euler and William Rowan Hamilton would extend the theory of classical mechanics considerably.[12] They picked up the interactive intertwining of mathematics and physics begun two millennia earlier by Pythagoras.

Among the great conceptual achievements of the 19th and 20th centuries were the consolidation of the idea of energy (as well as its global conservation) by the inclusion of heat, electricity and magnetism, and then light. The laws of thermodynamics, and most importantly the introduction of the singular concept of entropy began to provide a macroscopic explanation for the properties of matter. Statistical mechanics (followed by statistical physics and Quantum statistical mechanics) emerged as an offshoot of thermodynamics late in the 19th century. Another important event in the 19th century was the discovery of electromagnetic theory, unifying the previously separate phenomena of electricity, magnetism and light.

The pillars of modern physics, and perhaps the most revolutionary theories in the history of physics, have been relativity theory and quantum mechanics. Newtonian mechanics was subsumed under special relativity and Newton's gravity was given a kinematic explanation by general relativity. Quantum mechanics led to an understanding of blackbody radiation (which indeed, was an original motivation for the theory) and of anomalies in the specific heats of solids — and finally to an understanding of the internal structures of atoms and molecules. Quantum mechanics soon gave way to the formulation of quantum field theory (QFT), begun in the late 1920s. In the aftermath of World War 2, more progress brought much renewed interest in QFT, which had since the early efforts, stagnated. The same period also saw fresh attacks on the problems of superconductivity and phase transitions, as well as the first applications of QFT in the area of theoretical condensed matter. The 1960s and 70s saw the formulation of the Standard model of particle physics using QFT and progress in condensed matter physics (theoretical foundations of superconductivity and critical phenomena, among others), in parallel to the applications of relativity to problems in astronomy and cosmology respectively.

All of these achievements depended on the theoretical physics as a moving force both to suggest experiments and to consolidate results — often by ingenious application of existing mathematics, or, as in the case of Descartes and Newton (with Leibniz), by inventing new mathematics. Fourier's studies of heat conduction led to a new branch of mathematics: infinite, orthogonal series.[13]

Mainstream theories (sometimes referred to as central theories) are the body of knowledge of both factual and scientific views and possess a usual scientific quality of the tests of repeatability, consistency with existing well-established science and experimentation. There do exist mainstream theories that are generally accepted theories based solely upon their effects explaining a wide variety of data, although the detection, explanation, and possible composition are subjects of debate.

The proposed theories of physics are usually relatively new theories which deal with the study of physics which include scientific approaches, means for determining the validity of models and new types of reasoning used to arrive at the theory. However, some proposed theories include theories that have been around for decades and have eluded methods of discovery and testing. Proposed theories can include fringe theories in the process of becoming established (and, sometimes, gaining wider acceptance). Proposed theories usually have not been tested. In addition to the theories like those listed below, there are also different interpretations of quantum mechanics, which may or may not be considered different theories since it is debatable whether they yield different predictions for physical experiments, even in principle.

Fringe theories include any new area of scientific endeavor in the process of becoming established and some proposed theories. It can include speculative sciences. This includes physics fields and physical theories presented in accordance with known evidence, and a body of associated predictions have been made according to that theory.

Famous series of books dealing with theoretical concepts in physics covering 10 volumes, translated into many languages and reprinted over many editions. Often known simply as "Landau and Lifschits" or "Landau-Lifschits" in the literature.

A set of lectures given in 1909 at Columbia University.

A series of lessons from a master educator of theoretical physicists.