Short description: Form for logical arguments, obtained by abstracting from the subject matter of its content terms 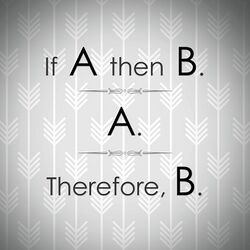 This argument in term logic utilizing modus ponens makes use of three statements in logical form expressed in simplified English.
This article is about the term as used in logic. For the linguistics term, see Logical form (linguistics).

The importance of the concept of form to logic was already recognized in ancient times. Aristotle, in the Prior Analytics, was probably the first to employ variable letters to represent valid inferences. Therefore, Jan Łukasiewicz claims that the introduction of variables was "one of Aristotle's greatest inventions."

According to the followers of Aristotle like Ammonius, only the logical principles stated in schematic terms belong to logic, and not those given in concrete terms. The concrete terms man, mortal, and so forth are analogous to the substitution values of the schematic placeholders A, B, C, which were called the "matter" (Greek hyle, Latin materia) of the argument.

The term "logical form" itself was introduced by Bertrand Russell in 1914, in the context of his program to formalize natural language and reasoning, which he called philosophical logic. Russell wrote: "Some kind of knowledge of logical forms, though with most people it is not explicit, is involved in all understanding of discourse. It is the business of philosophical logic to extract this knowledge from its concrete integuments, and to render it explicit and pure."[2][3]

To demonstrate the important notion of the form of an argument, substitute letters for similar items throughout the sentences in the original argument.

Attention is given to argument and sentence form, because form is what makes an argument valid or cogent. All logical form arguments are either inductive or deductive. Inductive logical forms include inductive generalization, statistical arguments, causal argument, and arguments from analogy. Common deductive argument forms are hypothetical syllogism, categorical syllogism, argument by definition, argument based on mathematics, argument from definition. The most reliable forms of logic are modus ponens, modus tollens, and chain arguments because if the premises of the argument are true, then the conclusion necessarily follows.[5] Two invalid argument forms are affirming the consequent and denying the antecedent.

Affirming the consequent
All dogs are animals.
Coco is an animal.
Therefore, Coco is a dog.

It consists of stripping out all spurious grammatical features from the sentence (such as gender, and passive forms), and replacing all the expressions specific to the subject matter of the argument by schematic variables. Thus, for example, the expression "all A's are B's" shows the logical form which is common to the sentences "all men are mortals," "all cats are carnivores," "all Greeks are philosophers," and so on.

The fundamental difference between modern formal logic and traditional, or Aristotelian logic, lies in their differing analysis of the logical form of the sentences they treat:

The more complex modern view comes with more power. On the modern view, the fundamental form of a simple sentence is given by a recursive schema, like natural language and involving logical connectives, which are joined by juxtaposition to other sentences, which in turn may have logical structure. Medieval logicians recognized the problem of multiple generality, where Aristotelian logic is unable to satisfactorily render such sentences as "some guys have all the luck," because both quantities "all" and "some" may be relevant in an inference, but the fixed scheme that Aristotle used allows only one to govern the inference. Just as linguists recognize recursive structure in natural languages, it appears that logic needs recursive structure.

In semantic parsing, statements in natural languages are converted into logical forms that represent their meanings.[9]