Classical logic (or standard logic[1][2] or Frege-Russell logic[3]) is the intensively studied and most widely used class of deductive logic.[4] Classical logic has had much influence on analytic philosophy.

Each logical system in this class shares characteristic properties:[5]

Most semantics of classical logic are bivalent, meaning all of the possible denotations of propositions can be categorized as either true or false.

Classical logic is a 19th and 20th-century innovation. The name does not refer to classical antiquity, which used the term logic of Aristotle. Classical logic was the reconciliation of Aristotle's logic, which dominated most of the last 2000 years, with the propositional Stoic logic. The two were sometimes seen as irreconcilable. 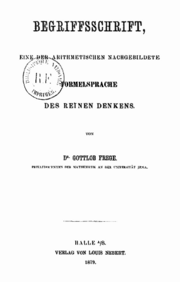 The original first-order, classical logic is found in Gottlob Frege's Begriffsschrift. It has a wider application than Aristotle's logic and is capable of expressing Aristotle's logic as a special case. It explains the quantifiers in terms of mathematical functions. It was also the first logic capable of dealing with the problem of multiple generality, for which Aristotle's system was impotent. Frege, who is considered the founder of analytic philosophy, invented it to show all of mathematics was derivable from logic, and make arithmetic rigorous as David Hilbert had done for geometry, the doctrine is known as logicism in the foundations of mathematics. The notation Frege used never much caught on. Hugh MacColl published a variant of propositional logic two years prior.

With the advent of algebraic logic, it became apparent that classical propositional calculus admits other semantics. In Boolean-valued semantics (for classical propositional logic), the truth values are the elements of an arbitrary Boolean algebra; "true" corresponds to the maximal element of the algebra, and "false" corresponds to the minimal element. Intermediate elements of the algebra correspond to truth values other than "true" and "false". The principle of bivalence holds only when the Boolean algebra is taken to be the two-element algebra, which has no intermediate elements.