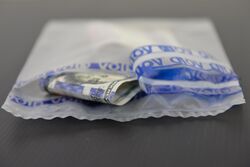 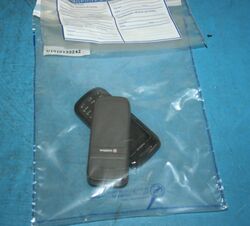 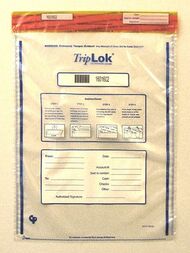 A security bag is a heavy duty bag used to contain high-value products or documents or legally sensitive items. Envelopes with security features are called security envelopes as well as security bags. Cash for deposit in a bank is often placed in a special deposit bag with security features.[1][2] When used to contain items related to a crime, special evidence bags are used.[3] Authentication of signatures and chain of custody are often required.

Bags and envelopes are often closed by an integral pressure sensitive adhesive on the closing flap; removal of a release liner allows convenient closing of the bag. Several types of security features can be included in the flap structure which are designed to irreversibly indicate opening.[4][5][6][7][8][9][10]

Separate security tapes are also used. Tamper-indicating security seals employ a variety of mechanisms for operation, each with its own advantages and disadvantages.

Documentation such as labels for certified signatures for custody and chain-of-custody labels are frequently included.

No one security feature can be considered as "tamper proof".[11] Layers of TR and TE features, as well as the broader security systems are needed to provide better assurance of security. All security products can be foiled by a knowledgeable person with sufficient time and with access to specialized tools, solvents, extreme temperatures,[12] other security bags, security tapes, etc.