Girl with a Book by José Ferraz de Almeida Júnior

Thought (or thinking) encompasses a flow of ideas and associations that can lead to logical conclusions.[1] Although thinking is an activity of an existential value for humans, there is still no consensus as to how it is adequately defined or understood.

Because thought underlies many human actions and interactions, understanding its physical and metaphysical origins and its effects has been a longstanding goal of many academic disciplines including philosophy, linguistics, psychology, neuroscience, artificial intelligence, biology, sociology and cognitive science.

Thinking allows humans to make sense of, interpret, represent or model the world they experience, and to make predictions about that world. It is therefore helpful to an organism with needs, objectives, and desires as it makes plans or otherwise attempts to accomplish those goals. 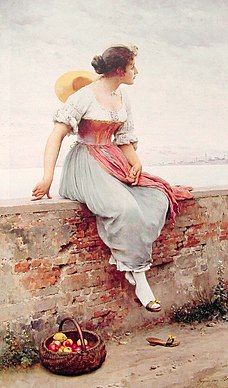 The word thought comes from Old English þoht, or geþoht, from stem of þencan "to conceive of in the mind, consider".[2]

Definitions may or may not require that thought

Definitions of thought may also be derived directly or indirectly from theories of thought.

The phenomenology movement in philosophy saw a radical change in the way in which we understand thought. Martin Heidegger's phenomenological analyses of the existential structure of man in Being and Time cast new light on the issue of thinking, unsettling traditional cognitive or rational interpretations of man which affect the way we understand thought. The notion of the fundamental role of non-cognitive understanding in rendering possible thematic consciousness informed the discussion surrounding artificial intelligence (AI) during the 1970s and 1980s.[15]

Phenomenology, however, is not the only approach to thinking in modern Western philosophy. Philosophy of mind is a branch of philosophy that studies the nature of the mind, mental events, mental functions, mental properties, consciousness and their relationship to the physical body, particularly the brain. The mind–body problem, i.e. the relationship of the mind to the body, is commonly seen as the central issue in philosophy of mind, although there are other issues concerning the nature of the mind that do not involve its relation to the physical body.[16]

The mind–body problem concerns the explanation of the relationship that exists between minds, or mental processes, and bodily states or processes.[16] The main aim of philosophers working in this area is to determine the nature of the mind and mental states/processes, and how—or even if—minds are affected by and can affect the body.

Human perceptual experiences depend on stimuli which arrive at one's various sensory organs from the external world and these stimuli cause changes in one's mental state, ultimately causing one to feel a sensation, which may be pleasant or unpleasant. Someone's desire for a slice of pizza, for example, will tend to cause that person to move his or her body in a specific manner and in a specific direction to obtain what he or she wants. The question, then, is how it can be possible for conscious experiences to arise out of a lump of gray matter endowed with nothing but electrochemical properties. A related problem is to explain how someone's propositional attitudes (e.g. beliefs and desires) can cause that individual's neurons to fire and his muscles to contract in exactly the correct manner. These comprise some of the puzzles that have confronted epistemologists and philosophers of mind from at least the time of René Descartes.[17]

The above reflects a classical, functional description of how we work as cognitive, thinking systems. However the apparently irresolvable mind–body problem is said to be overcome, and bypassed, by the embodied cognition approach, with its roots in the work of Heidegger, Piaget, Vygotsky, Merleau-Ponty and the pragmatist John Dewey.[18][19]

This approach states that the classical approach of separating the mind and analysing its processes is misguided: instead, we should see that the mind, actions of an embodied agent, and the environment it perceives and envisions, are all parts of a whole which determine each other. Therefore, functional analysis of the mind alone will always leave us with the mind–body problem which cannot be solved.[20]

A neuron (also known as a neurone or nerve cell) is an excitable cell in the nervous system that processes and transmits information by electrochemical signaling. Neurons are the core components of the brain, the vertebrate spinal cord, the invertebrate ventral nerve cord and the peripheral nerves. A number of specialized types of neurons exist: sensory neurons respond to touch, sound, light and numerous other stimuli affecting cells of the sensory organs that then send signals to the spinal cord and brain. Motor neurons receive signals from the brain and spinal cord that cause muscle contractions and affect glands. Interneurons connect neurons to other neurons within the brain and spinal cord. Neurons respond to stimuli, and communicate the presence of stimuli to the central nervous system, which processes that information and sends responses to other parts of the body for action. Neurons do not go through mitosis and usually cannot be replaced after being destroyed, although astrocytes have been observed to turn into neurons, as they are sometimes pluripotent.

Man thinking on a train journey

Graffiti on the wall: "to 'think for myself' became less favorable"

Psychologists have concentrated on thinking as an intellectual exertion aimed at finding an answer to a question or the solution of a practical problem. Cognitive psychology is a branch of psychology that investigates internal mental processes such as problem solving, memory, and language; all of which are used in thinking. The school of thought arising from this approach is known as cognitivism, which is interested in how people mentally represent information processing. It had its foundations in the Gestalt psychology of Max Wertheimer, Wolfgang Köhler, and Kurt Koffka,[21] and in the work of Jean Piaget, who provided a theory of stages/phases that describes children's cognitive development.

Cognitive psychologists use psychophysical and experimental approaches to understand, diagnose, and solve problems, concerning themselves with the mental processes which mediate between stimulus and response. They study various aspects of thinking, including the psychology of reasoning, and how people make decisions and choices, solve problems, as well as engage in creative discovery and imaginative thought. Cognitive theory contends that solutions to problems either take the form of algorithms: rules that are not necessarily understood but promise a solution, or of heuristics: rules that are understood but that do not always guarantee solutions. Cognitive science differs from cognitive psychology in that algorithms that are intended to simulate human behavior are implemented or implementable on a computer. In other instances, solutions may be found through insight, a sudden awareness of relationships.

In developmental psychology, Jean Piaget was a pioneer in the study of the development of thought from birth to maturity. In his theory of cognitive development, thought is based on actions on the environment. That is, Piaget suggests that the environment is understood through assimilations of objects in the available schemes of action and these accommodate to the objects to the extent that the available schemes fall short of the demands. As a result of this interplay between assimilation and accommodation, thought develops through a sequence of stages that differ qualitatively from each other in mode of representation and complexity of inference and understanding. That is, thought evolves from being based on perceptions and actions at the sensorimotor stage in the first two years of life to internal representations in early childhood. Subsequently, representations are gradually organized into logical structures which first operate on the concrete properties of the reality, in the stage of concrete operations, and then operate on abstract principles that organize concrete properties, in the stage of formal operations.[22] In recent years, the Piagetian conception of thought was integrated with information processing conceptions. Thus, thought is considered as the result of mechanisms that are responsible for the representation and processing of information. In this conception, speed of processing, cognitive control, and working memory are the main functions underlying thought. In the neo-Piagetian theories of cognitive development, the development of thought is considered to come from increasing speed of processing, enhanced cognitive control, and increasing working memory.[23]

Positive psychology emphasizes the positive aspects of human psychology as equally important as the focus on mood disorders and other negative symptoms. In Character Strengths and Virtues, Peterson and Seligman list a series of positive characteristics. One person is not expected to have every strength, nor are they meant to fully capsulate that characteristic entirely. The list encourages positive thought that builds on a person's strengths, rather than how to "fix" their "symptoms".[24]

The "id", "ego" and "super-ego" are the three parts of the "psychic apparatus" defined in Sigmund Freud's structural model of the psyche; they are the three theoretical constructs in terms of whose activity and interaction mental life is described. According to this model, the uncoordinated instinctual trends are encompassed by the "id", the organized realistic part of the psyche is the "ego", and the critical, moralizing function is the "super-ego".[25]

For psychoanalysis, the unconscious does not include all that is not conscious, rather only what is actively repressed from conscious thought or what the person is averse to knowing consciously. In a sense this view places the self in relationship to their unconscious as an adversary, warring with itself to keep what is unconscious hidden. If a person feels pain, all he can think of is alleviating the pain. Any of his desires, to get rid of pain or enjoy something, command the mind what to do. For Freud, the unconscious was a repository for socially unacceptable ideas, wishes or desires, traumatic memories, and painful emotions put out of mind by the mechanism of psychological repression. However, the contents did not necessarily have to be solely negative. In the psychoanalytic view, the unconscious is a force that can only be recognized by its effects—it expresses itself in the symptom.[26]

A "thought bubble" is an illustration depicting thought.

Social psychology is the study of how people and groups interact. Scholars in this interdisciplinary area are typically either psychologists or sociologists, though all social psychologists employ both the individual and the group as their units of analysis.[27]

Despite their similarity, psychological and sociological researchers tend to differ in their goals, approaches, methods, and terminology. They also favor separate academic journals and professional societies. The greatest period of collaboration between sociologists and psychologists was during the years immediately following World War II .[28] Although there has been increasing isolation and specialization in recent years, some degree of overlap and influence remains between the two disciplines.[29]

In the "Definitions" chapter of Jung's seminal work Psychological Types, under the definition of "collective" Jung references representations collectives, a term coined by Lucien Lévy-Bruhl in his 1910 book How Natives Think. Jung says this is what he describes as the collective unconscious. Freud, on the other hand, did not accept the idea of a collective unconscious.