The more frequently used magnetic vector potential is defined so that its curl is equal to the magnetic field: [math]\displaystyle{ \nabla \times \mathbf{A}=\mathbf{B}\, }[/math]. Together with the electric potential φ, the magnetic vector potential can be used to specify the electric field E as well. Therefore, many equations of electromagnetism can be written either in terms of the fields E and B, or equivalently in terms of the potentials φ and A. In more advanced theories such as quantum mechanics, most equations use potentials rather than fields.

Historically, Lord Kelvin first introduced vector potential in 1851, along with the formula relating it to the magnetic field.[1]

The magnetic vector potential A is a vector field, defined along with the electric potential ϕ (a scalar field) by the equations:[2]

If electric and magnetic fields are defined as above from potentials, they automatically satisfy two of Maxwell's equations: Gauss's law for magnetism and Faraday's Law. For example, if A is continuous and well-defined everywhere, then it is guaranteed not to result in magnetic monopoles. (In the mathematical theory of magnetic monopoles, A is allowed to be either undefined or multiple-valued in some places; see magnetic monopole for details).

Starting with the above definitions:

Alternatively, the existence of A and ϕ is guaranteed from these two laws using Helmholtz's theorem. For example, since the magnetic field is divergence-free (Gauss's law for magnetism; i.e., ∇ ⋅ B = 0), A always exists that satisfies the above definition.

The vector potential A is used when studying the Lagrangian in classical mechanics and in quantum mechanics (see Schrödinger equation for charged particles, Dirac equation, Aharonov–Bohm effect).

In the SI system, the units of A are V·s·m−1 and are the same as that of momentum per unit charge, or force per unit current.

The line integral of A over a close loop is equal to the magnetic flux through the enclosed surface:

Therefore, the units of A are also equivalent to Weber per metre. The above equation is useful in the flux quantization of superconducting loops.

Although the magnetic field B is a pseudovector (also called axial vector), the vector potential A is a polar vector.[3] This means that if the right-hand rule for cross products were replaced with a left-hand rule, but without changing any other equations or definitions, then B would switch signs, but A would not change. This is an example of a general theorem: The curl of a polar vector is a pseudovector, and vice versa.[3]

The above definition does not define the magnetic vector potential uniquely because, by definition, we can arbitrarily add curl-free components to the magnetic potential without changing the observed magnetic field. Thus, there is a degree of freedom available when choosing A. This condition is known as gauge invariance.

Using the above definition of the potentials and applying it to the other two Maxwell's equations (the ones that are not automatically satisfied) results in a complicated differential equation that can be simplified using the Lorenz gauge where A is chosen to satisfy:

Using the Lorenz gauge, Maxwell's equations can be written compactly in terms of the magnetic vector potential A and the electric scalar potential ϕ:[2]

In other gauges, the equations are different. A different notation to write these same equations (using four-vectors) is shown below.

Calculation of potentials from source distributions

The solutions of Maxwell's equations in the Lorenz gauge (see Feynman[2] and Jackson[4]) with the boundary condition that both potentials go to zero sufficiently fast as they approach infinity are called the retarded potentials, which are the magnetic vector potential A(r, t) and the electric scalar potential ϕ(r, t) due to a current distribution of current density J(r′, t′), charge density ρ(r′, t′), and volume Ω, within which ρ and J are non-zero at least sometimes and some places):

where the fields at position vector r and time t are calculated from sources at distant position r′ at an earlier time t′. The location r′ is a source point in the charge or current distribution (also the integration variable, within volume Ω). The earlier time t′ is called the retarded time, and calculated as

There are a few notable things about A and ϕ calculated in this way:

In other gauges, the formula for A and ϕ is different; for example, see Coulomb gauge for another possibility.

Representing the Coulomb gauge magnetic vector potential A, magnetic flux density B, and current density J fields around a toroidal inductor of circular cross section. Thicker lines indicate field lines of higher average intensity. Circles in the cross section of the core represent the B-field coming out of the picture, plus signs represent B-field going into the picture. ∇ ⋅ A = 0 has been assumed.

See Feynman[6] for the depiction of the A field around a long thin solenoid.

The figure to the right is an artist's depiction of the A field. The thicker lines indicate paths of higher average intensity (shorter paths have higher intensity so that the path integral is the same). The lines are drawn to (aesthetically) impart the general look of the A-field.

The drawing tacitly assumes ∇ ⋅ A = 0, true under one of the following assumptions:

In the context of special relativity, it is natural to join the magnetic vector potential together with the (scalar) electric potential into the electromagnetic potential, also called four-potential.

where □ is the d'Alembertian and J is the four-current. The first equation is the Lorenz gauge condition while the second contains Maxwell's equations. The four-potential also plays a very important role in quantum electrodynamics. 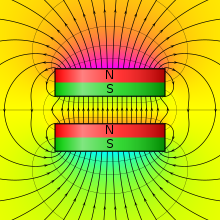 The scalar potential is another useful quantity in describing the magnetic field, especially for permanent magnets.

In a simply connected domain where there is no free current,

hence we can define a magnetic scalar potential, ψ, as[7]

Using the definition of H:

is called the bound magnetic charge.

If there is free current, one may subtract the contribution of free current per Biot–Savart law from total magnetic field and solve the remainder with the scalar potential method. To date there has not been any reproducible evidence for the existence of magnetic monopoles.[8]