Short description: Opposition of a circuit to a current when a voltage is applied

In electrical engineering, impedance is the opposition to alternating current presented by the combined effect of resistance and reactance in a circuit.[1]

Impedance extends the concept of resistance to alternating current (AC) circuits, and possesses both magnitude and phase, unlike resistance, which has only magnitude.

Impedance is a complex number, with the same units as resistance, for which the SI unit is the ohm (Ω). Its symbol is usually Z, and it may be represented by writing its magnitude and phase in the polar form |Z|∠θ. However, Cartesian complex number representation is often more powerful for circuit analysis purposes.

The notion of impedance is useful for performing AC analysis of electrical networks, because it allows relating sinusoidal voltages and currents by a simple linear law. In multiple port networks, the two-terminal definition of impedance is inadequate, but the complex voltages at the ports and the currents flowing through them are still linearly related by the impedance matrix.[3]

The reciprocal of impedance is admittance, whose SI unit is the siemens, formerly called mho.

The term impedance was coined by Oliver Heaviside in July 1886.[4][5] Arthur Kennelly was the first to represent impedance with complex numbers in 1893.[6]

In addition to resistance as seen in DC circuits, impedance in AC circuits includes the effects of the induction of voltages in conductors by the magnetic fields (inductance), and the electrostatic storage of charge induced by voltages between conductors (capacitance). The impedance caused by these two effects is collectively referred to as reactance and forms the imaginary part of complex impedance whereas resistance forms the real part.

A graphical representation of the complex impedance plane

The impedance of a two-terminal circuit element is represented as a complex quantity [math]\displaystyle{ Z }[/math]. The polar form conveniently captures both magnitude and phase characteristics as

In Cartesian form, impedance is defined as

Generalized impedances in a circuit can be drawn with the same symbol as a resistor (US ANSI or DIN Euro) or with a labeled box.

The impedance of a bipolar circuit is defined as the ratio of these quantities:

The magnitude equation is the familiar Ohm's law applied to the voltage and current amplitudes, while the second equation defines the phase relationship.

This representation using complex exponentials may be justified by noting that (by Euler's formula):

The real-valued sinusoidal function representing either voltage or current may be broken into two complex-valued functions. By the principle of superposition, we may analyse the behaviour of the sinusoid on the left-hand side by analysing the behaviour of the two complex terms on the right-hand side. Given the symmetry, we only need to perform the analysis for one right-hand term. The results are identical for the other. At the end of any calculation, we may return to real-valued sinusoids by further noting that 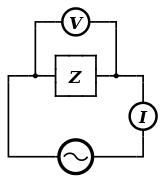 The meaning of electrical impedance can be understood by substituting it into Ohm's law.[9][10] Assuming a two-terminal circuit element with impedance [math]\displaystyle{ Z }[/math] is driven by a sinusoidal voltage or current as above, there holds

Just as impedance extends Ohm's law to cover AC circuits, other results from DC circuit analysis, such as voltage division, current division, Thévenin's theorem and Norton's theorem, can also be extended to AC circuits by replacing resistance with impedance.

A phasor is represented by a constant complex number, usually expressed in exponential form, representing the complex amplitude (magnitude and phase) of a sinusoidal function of time. Phasors are used by electrical engineers to simplify computations involving sinusoids, where they can often reduce a differential equation problem to an algebraic one.

The impedance of a circuit element can be defined as the ratio of the phasor voltage across the element to the phasor current through the element, as determined by the relative amplitudes and phases of the voltage and current. This is identical to the definition from Ohm's law given above, recognising that the factors of [math]\displaystyle{ e^{j\omega t} }[/math] cancel. 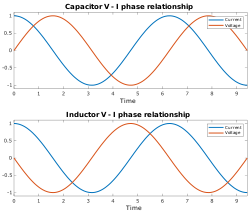 The phase angles in the equations for the impedance of capacitors and inductors indicate that the voltage across a capacitor lags the current through it by a phase of [math]\displaystyle{ \pi/2 }[/math], while the voltage across an inductor leads the current through it by [math]\displaystyle{ \pi/2 }[/math]. The identical voltage and current amplitudes indicate that the magnitude of the impedance is equal to one.

The impedance of an ideal resistor is purely real and is called resistive impedance:

In this case, the voltage and current waveforms are proportional and in phase.

Ideal inductors and capacitors have a purely imaginary reactive impedance:

the impedance of inductors increases as frequency increases;

the impedance of capacitors decreases as frequency increases;

In both cases, for an applied sinusoidal voltage, the resulting current is also sinusoidal, but in quadrature, 90 degrees out of phase with the voltage. However, the phases have opposite signs: in an inductor, the current is lagging; in a capacitor the current is leading.

Note the following identities for the imaginary unit and its reciprocal:

Thus the inductor and capacitor impedance equations can be rewritten in polar form:

The magnitude gives the change in voltage amplitude for a given current amplitude through the impedance, while the exponential factors give the phase relationship.

What follows below is a derivation of impedance for each of the three basic circuit elements: the resistor, the capacitor, and the inductor. Although the idea can be extended to define the relationship between the voltage and current of any arbitrary signal, these derivations assume sinusoidal signals. In fact, this applies to any arbitrary periodic signals, because these can be approximated as a sum of sinusoids through Fourier analysis.

For a resistor, there is the relation

which is Ohm's law.

Considering the voltage signal to be

This result is commonly expressed as

For a capacitor, there is the relation:

Considering the voltage signal to be

and thus, as previously,

Conversely, if the current through the circuit is assumed to be sinusoidal, its complex representation being

then integrating the differential equation

The Const term represents a fixed potential bias superimposed to the AC sinusoidal potential, that plays no role in AC analysis. For this purpose, this term can be assumed to be 0, hence again the impedance

For the inductor, we have the relation (from Faraday's law):

This time, considering the current signal to be:

This result is commonly expressed in polar form as

or, using Euler's formula, as

As in the case of capacitors, it is also possible to derive this formula directly from the complex representations of the voltages and currents, or by assuming a sinusoidal voltage between the two poles of the inductor. In the latter case, integrating the differential equation above leads to a constant term for the current, that represents a fixed DC bias flowing through the inductor. This is set to zero because AC analysis using frequency domain impedance considers one frequency at a time and DC represents a separate frequency of zero hertz in this context.

Impedance defined in terms of jω can strictly be applied only to circuits that are driven with a steady-state AC signal. The concept of impedance can be extended to a circuit energised with any arbitrary signal by using complex frequency instead of jω. Complex frequency is given the symbol s and is, in general, a complex number. Signals are expressed in terms of complex frequency by taking the Laplace transform of the time domain expression of the signal. The impedance of the basic circuit elements in this more general notation is as follows:

For a DC circuit, this simplifies to s = 0. For a steady-state sinusoidal AC signal s = jω.

The impedance [math]\displaystyle{ Z }[/math] of an electrical component is defined as the ratio between the Laplace transforms of the voltage over it and the current through it, i.e.

Again, for a capacitor, one gets that [math]\displaystyle{ i(t) = C\,\mathrm{d}v(t)/\mathrm{d}t = j\omega C\,v(t) }[/math], and hence [math]\displaystyle{ Z_C(\omega) = 1/j\omega C }[/math]. The phasor domain is sometimes dubbed the frequency domain, although it lacks one of the dimensions of the Laplace parameter.[11] For steady-state AC, the polar form of the complex impedance relates the amplitude and phase of the voltage and current. In particular:

These two relationships hold even after taking the real part of the complex exponentials (see phasors), which is the part of the signal one actually measures in real-life circuits.

Resistance and reactance together determine the magnitude and phase of the impedance through the following relations:

In many applications, the relative phase of the voltage and current is not critical so only the magnitude of the impedance is significant.

Resistance [math]\displaystyle{ R }[/math] is the real part of impedance; a device with a purely resistive impedance exhibits no phase shift between the voltage and current.

A capacitor has a purely reactive impedance that is inversely proportional to the signal frequency. A capacitor consists of two conductors separated by an insulator, also known as a dielectric.

The minus sign indicates that the imaginary part of the impedance is negative.

At low frequencies, a capacitor approaches an open circuit so no current flows through it.

A DC voltage applied across a capacitor causes charge to accumulate on one side; the electric field due to the accumulated charge is the source of the opposition to the current. When the potential associated with the charge exactly balances the applied voltage, the current goes to zero.

Driven by an AC supply, a capacitor accumulates only a limited charge before the potential difference changes sign and the charge dissipates. The higher the frequency, the less charge accumulates and the smaller the opposition to the current.

For an inductor consisting of a coil with [math]\displaystyle{ N }[/math] loops this gives:

The back-emf is the source of the opposition to current flow. A constant direct current has a zero rate-of-change, and sees an inductor as a short-circuit (it is typically made from a material with a low resistivity). An alternating current has a time-averaged rate-of-change that is proportional to frequency, this causes the increase in inductive reactance with frequency.

The total reactance is given by

so that the total impedance is

For components connected in series, the current through each circuit element is the same; the total impedance is the sum of the component impedances.

For components connected in parallel, the voltage across each circuit element is the same; the ratio of currents through any two elements is the inverse ratio of their impedances.

Hence the inverse total impedance is the sum of the inverses of the component impedances:

The use of an impulse response may be used in combination with the fast Fourier transform (FFT) to rapidly measure the electrical impedance of various electrical devices.[13]

The LCR meter (Inductance (L), Capacitance (C), and Resistance (R)) is a device commonly used to measure the inductance, resistance and capacitance of a component; from these values, the impedance at any frequency can be calculated.

Consider an LC tank circuit. The complex impedance of the circuit is

In general, neither impedance nor admittance can vary with time, since they are defined for complex exponentials in which −∞ < t < +∞. If the complex exponential voltage to current ratio changes over time or amplitude, the circuit element cannot be described using the frequency domain. However, many components and systems (e.g., varicaps that are used in radio tuners) may exhibit non-linear or time-varying voltage to current ratios that seem to be linear time-invariant (LTI) for small signals and over small observation windows, so they can be roughly described as-if they had a time-varying impedance. This description is an approximation: Over large signal swings or wide observation windows, the voltage to current relationship will not be LTI and cannot be described by impedance.