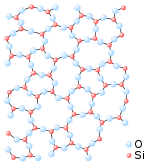 Quartz (crystalline SiO2)
The magnetic disorder of spin glass compared to a ferromagnet is analogous to the positional disorder of glass (left) compared to quartz (right).

In condensed matter physics, a spin glass is a magnetic state characterized by randomness, besides cooperative behavior in freezing of spins at a temperature called 'freezing temperature' Tf.[1] Magnetic spins are, roughly speaking, the orientation of the north and south magnetic poles in three-dimensional space. In ferromagnetic solids, component atoms' magnetic spins all align in the same direction. Spin glass when contrasted with a ferromagnet is defined as "disordered" magnetic state in which spins are aligned randomly or not with a regular pattern and the couplings too are random.[1]

The term "glass" comes from an analogy between the magnetic disorder in a spin glass and the positional disorder of a conventional, chemical glass, e.g., a window glass. In window glass or any amorphous solid the atomic bond structure is highly irregular; in contrast, a crystal has a uniform pattern of atomic bonds. In ferromagnetic solids, magnetic spins all align in the same direction; this is analogous to a crystal's lattice-based structure.

The individual atomic bonds in a spin glass are a mixture of roughly equal numbers of ferromagnetic bonds (where neighbors have the same orientation) and antiferromagnetic bonds (where neighbors have exactly the opposite orientation: north and south poles are flipped 180 degrees). These patterns of aligned and misaligned atomic magnets create what are known as frustrated interactions – distortions in the geometry of atomic bonds compared to what would be seen in a regular, fully aligned solid. They may also create situations where more than one geometric arrangement of atoms is stable.

Spin glasses and the complex internal structures that arise within them are termed "metastable" because they are "stuck" in stable configurations other than the lowest-energy configuration (which would be aligned and ferromagnetic). The mathematical complexity of these structures is difficult but fruitful to study experimentally or in simulations; with applications to physics, chemistry, materials science and artificial neural networks in computer science.

It is the time dependence which distinguishes spin glasses from other magnetic systems.

If a magnetic field is applied as the sample is cooled to the transition temperature, magnetization of the sample increases as described by the Curie law. Upon reaching Tc, the sample becomes a spin glass and further cooling results in little change in magnetization. This is referred to as the field-cooled magnetization.

When the external magnetic field is removed, the magnetization of the spin glass falls rapidly to a lower value known as the remanent magnetization.

Magnetization then decays slowly as it approaches zero (or some small fraction of the original value—this remains unknown). This decay is non-exponential and no simple function can fit the curve of magnetization versus time adequately.[2] This slow decay is particular to spin glasses. Experimental measurements on the order of days have shown continual changes above the noise level of instrumentation.[2]

Surprisingly, the sum of the two complicated functions of time (the zero-field-cooled and remanent magnetizations) is a constant, namely the field-cooled value, and thus both share identical functional forms with time,[3] at least in the limit of very small external fields.

In this model, we have spins arranged on a [math]\displaystyle{ d }[/math]-dimensional lattice with only nearest neighbor interactions similar to the Ising model. This model can be solved exactly for the critical temperatures and a glassy phase is observed to exist at low temperatures.[4] The Hamiltonian for this spin system is given by:

Solving for the free energy using the replica method, below a certain temperature, a new magnetic phase called the spin glass phase (or glassy phase) of the system is found to exist which is characterized by a vanishing magnetization [math]\displaystyle{ m = 0 }[/math] along with a non-vanishing value of the two point correlation function between spins at the same lattice point but at two different replicas:

Under the assumption of replica symmetry, the mean-field free energy is given by the expression:[4]

In addition to unusual experimental properties, spin glasses are the subject of extensive theoretical and computational investigations. A substantial part of early theoretical work on spin glasses dealt with a form of mean-field theory based on a set of replicas of the partition function of the system.

An important, exactly solvable model of a spin glass was introduced by David Sherrington and Scott Kirkpatrick in 1975. It is an Ising model with long range frustrated ferro- as well as antiferromagnetic couplings. It corresponds to a mean-field approximation of spin glasses describing the slow dynamics of the magnetization and the complex non-ergodic equilibrium state.

Unlike the Edwards–Anderson (EA) model, in the system though only two-spin interactions are considered, the range of each interaction can be potentially infinite (of the order of the size of the lattice). Therefore, we see that any two spins can be linked with a ferromagnetic or an antiferromagnetic bond and the distribution of these is given exactly as in the case of Edwards–Anderson model. The Hamiltonian for SK model is very similar to the EA model:

where [math]\displaystyle{ J_{ij}, S_i, S_j }[/math] have same meanings as in the EA model. The equilibrium solution of the model, after some initial attempts by Sherrington, Kirkpatrick and others, was found by Giorgio Parisi in 1979 with the replica method. The subsequent work of interpretation of the Parisi solution—by M. Mezard, G. Parisi, M.A. Virasoro and many others—revealed the complex nature of a glassy low temperature phase characterized by ergodicity breaking, ultrametricity and non-selfaverageness. Further developments led to the creation of the cavity method, which allowed study of the low temperature phase without replicas. A rigorous proof of the Parisi solution has been provided in the work of Francesco Guerra and Michel Talagrand.[5]

The formalism of replica mean-field theory has also been applied in the study of neural networks, where it has enabled calculations of properties such as the storage capacity of simple neural network architectures without requiring a training algorithm (such as backpropagation) to be designed or implemented.[6]

A thermodynamic system is ergodic when, given any (equilibrium) instance of the system, it eventually visits every other possible (equilibrium) state (of the same energy). One characteristic of spin glass systems is that, below the freezing temperature [math]\displaystyle{ T_\text{f} }[/math], instances are trapped in a "non-ergodic" set of states: the system may fluctuate between several states, but cannot transition to other states of equivalent energy. Intuitively, one can say that the system cannot escape from deep minima of the hierarchically disordered energy landscape; the distances between minima are given by an ultrametric, with tall energy barriers between minima.[note 2] The participation ratio counts the number of states that are accessible from a given instance, that is, the number of states that participate in the ground state. The ergodic aspect of spin glass was instrumental in the awarding of half the 2021 Nobel Prize in Physics to Giorgio Parisi.[7][8][9]

For physical systems, such as dilute manganese in copper, the freezing temperature is typically as low as 30 kelvins (−240 °C), and so the spin-glass magnetism appears to be practically without applications in daily life. The non-ergodic states and rugged energy landscapes are, however, quite useful in understanding the behavior of certain neural networks, including Hopfield networks, as well as many problems in computer science optimization and genetics.

In 2020, physics researchers at Radboud University and Uppsala University announced they had observed a behavior known as self-induced spin glass in the atomic structure of neodymium. One of the researchers explained, "...we are specialists in scanning tunneling microscopy. It allows us to see the structure of individual atoms, and we can resolve the north and south poles of the atoms. With this advancement in high-precision imaging, we were able to discover the behavior in neodymium, because we could resolve the incredibly small changes in the magnetic structure." Neodymium behaves in a complex magnetic way that had not been seen before in a periodic table element.[10][11]

History of the field