Short description: Optimization algorithm for artificial neural networks
Backpropagation can also refer to the way the result of a playout is propagated up the search tree in Monte Carlo tree search.

In machine learning, backpropagation (backprop,[1] BP) is a widely used algorithm for training feedforward neural networks. Generalizations of backpropagation exist for other artificial neural networks (ANNs), and for functions generally. These classes of algorithms are all referred to generically as "backpropagation".[2] In fitting a neural network, backpropagation computes the gradient of the loss function with respect to the weights of the network for a single input–output example, and does so efficiently, unlike a naive direct computation of the gradient with respect to each weight individually. This efficiency makes it feasible to use gradient methods for training multilayer networks, updating weights to minimize loss; gradient descent, or variants such as stochastic gradient descent, are commonly used. The backpropagation algorithm works by computing the gradient of the loss function with respect to each weight by the chain rule, computing the gradient one layer at a time, iterating backward from the last layer to avoid redundant calculations of intermediate terms in the chain rule; this is an example of dynamic programming.[3]

The term backpropagation strictly refers only to the algorithm for computing the gradient, not how the gradient is used; however, the term is often used loosely to refer to the entire learning algorithm, including how the gradient is used, such as by stochastic gradient descent.[4] Backpropagation generalizes the gradient computation in the delta rule, which is the single-layer version of backpropagation, and is in turn generalized by automatic differentiation, where backpropagation is a special case of reverse accumulation (or "reverse mode").[5] The term backpropagation and its general use in neural networks was announced in (Rumelhart Hinton), then elaborated and popularized in (Rumelhart Hinton), but the technique was independently rediscovered many times, and had many predecessors dating to the 1960s; see § History.[6] A modern overview is given in the deep learning textbook by (Goodfellow Bengio).[7]

Backpropagation computes the gradient in weight space of a feedforward neural network, with respect to a loss function. Denote:

The overall network is a combination of function composition and matrix multiplication:

Note the distinction: during model evaluation, the weights are fixed, while the inputs vary (and the target output may be unknown), and the network ends with the output layer (it does not include the loss function). During model training, the input–output pair is fixed, while the weights vary, and the network ends with the loss function.

Backpropagation can be expressed for simple feedforward networks in terms of matrix multiplication, or more generally in terms of the adjoint graph.

For the basic case of a feedforward network, where nodes in each layer are connected only to nodes in the immediate next layer (without skipping any layers), and there is a loss function that computes a scalar loss for the final output, backpropagation can be understood simply by matrix multiplication.[lower-alpha 3] Essentially, backpropagation evaluates the expression for the derivative of the cost function as a product of derivatives between each layer from right to left – "backwards" – with the gradient of the weights between each layer being a simple modification of the partial products (the "backwards propagated error").

The derivative of the loss in terms of the inputs is given by the chain rule; note that each term is a total derivative, evaluated at the value of the network (at each node) on the input [math]\displaystyle{ x }[/math]:

where [math]\displaystyle{ \circ }[/math] is a Hadamard product, that is an element-wise product.

The gradient [math]\displaystyle{ \nabla }[/math] is the transpose of the derivative of the output in terms of the input, so the matrices are transposed and the order of multiplication is reversed, but the entries are the same:

Backpropagation then consists essentially of evaluating this expression from right to left (equivalently, multiplying the previous expression for the derivative from left to right), computing the gradient at each layer on the way; there is an added step, because the gradient of the weights isn't just a subexpression: there's an extra multiplication.

The gradient of the weights in layer [math]\displaystyle{ l }[/math] is then:

The [math]\displaystyle{ \delta^l }[/math] can easily be computed recursively, going from right to left, as:

The gradients of the weights can thus be computed using a few matrix multiplications for each level; this is backpropagation.

there are two key differences with backpropagation:

For more general graphs, and other advanced variations, backpropagation can be understood in terms of automatic differentiation, where backpropagation is a special case of reverse accumulation (or "reverse mode").[5]

The goal of any supervised learning algorithm is to find a function that best maps a set of inputs to their correct output. The motivation for backpropagation is to train a multi-layered neural network such that it can learn the appropriate internal representations to allow it to learn any arbitrary mapping of input to output.[10]

Learning as an optimization problem

To understand the mathematical derivation of the backpropagation algorithm, it helps to first develop some intuition about the relationship between the actual output of a neuron and the correct output for a particular training example. Consider a simple neural network with two input units, one output unit and no hidden units, and in which each neuron uses a linear output (unlike most work on neural networks, in which mapping from inputs to outputs is non-linear)[lower-alpha 7] that is the weighted sum of its input. 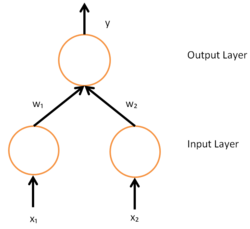 As an example consider a regression problem using the square error as a loss:

where E is the discrepancy or error.

Consider the network on a single training case: [math]\displaystyle{ (1, 1, 0) }[/math]. Thus, the input [math]\displaystyle{ x_1 }[/math] and [math]\displaystyle{ x_2 }[/math] are 1 and 1 respectively and the correct output, t is 0. Now if the relation is plotted between the network's output y on the horizontal axis and the error E on the vertical axis, the result is a parabola. The minimum of the parabola corresponds to the output y which minimizes the error E. For a single training case, the minimum also touches the horizontal axis, which means the error will be zero and the network can produce an output y that exactly matches the target output t. Therefore, the problem of mapping inputs to outputs can be reduced to an optimization problem of finding a function that will produce the minimal error. 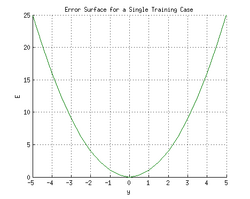 Error surface of a linear neuron for a single training case

However, the output of a neuron depends on the weighted sum of all its inputs:

In this example, upon injecting the training data [math]\displaystyle{ (1, 1, 0) }[/math], the loss function becomes

The gradient descent method involves calculating the derivative of the loss function with respect to the weights of the network. This is normally done using backpropagation. Assuming one output neuron,[lower-alpha 8] the squared error function is

which has a convenient derivative of:

Finding the derivative of the error

Calculating the partial derivative of the error with respect to a weight [math]\displaystyle{ w_{ij} }[/math] is done using the chain rule twice:

which for the logistic activation function case is:

The first factor is straightforward to evaluate if the neuron is in the output layer, because then [math]\displaystyle{ o_j = y }[/math] and

and taking the total derivative with respect to [math]\displaystyle{ o_j }[/math], a recursive expression for the derivative is obtained:

if [math]\displaystyle{ \varphi }[/math] is the logistic function, and the error is the square error:

Using a Hessian matrix of second-order derivatives of the error function, the Levenberg-Marquardt algorithm often converges faster than first-order gradient descent, especially when the topology of the error function is complicated.[11][12] It may also find solutions in smaller node counts for which other methods might not converge.[12] The Hessian can be approximated by the Fisher information matrix.[13]

The loss function is a function that maps values of one or more variables onto a real number intuitively representing some "cost" associated with those values. For backpropagation, the loss function calculates the difference between the network output and its expected output, after a training example has propagated through the network. 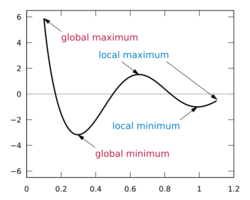 Gradient descent may find a local minimum instead of the global minimum.

The basics of continuous backpropagation were derived in the context of control theory by Henry J. Kelley in 1960,[18] and by Arthur E. Bryson in 1961.[19][20][21][22][23] They used principles of dynamic programming. In 1962, Stuart Dreyfus published a simpler derivation based only on the chain rule.[24] Bryson and Ho described it as a multi-stage dynamic system optimization method in 1969.[25][26] Backpropagation was derived by multiple researchers in the early 60's[22] and implemented to run on computers as early as 1970 by Seppo Linnainmaa.[27][28][29] Paul Werbos was first in the US to propose that it could be used for neural nets after analyzing it in depth in his 1974 dissertation.[30] While not applied to neural networks, in 1970 Linnainmaa published the general method for automatic differentiation (AD).[28][29] Although very controversial, some scientists believe this was actually the first step toward developing a back-propagation algorithm.[22][23][27][31] In 1973 Dreyfus adapts parameters of controllers in proportion to error gradients.[32] In 1974 Werbos mentioned the possibility of applying this principle to artificial neural networks,[30] and in 1982 he applied Linnainmaa's AD method to non-linear functions.[23][33]

Later the Werbos method was rediscovered and described in 1985 by Parker,[34][35] and in 1986 by Rumelhart, Hinton and Williams.[17][35][36] Rumelhart, Hinton and Williams showed experimentally that this method can generate useful internal representations of incoming data in hidden layers of neural networks.[10][37][38] Yann LeCun proposed the modern form of the back-propagation learning algorithm for neural networks in his PhD thesis in 1987. In 1993, Eric Wan won an international pattern recognition contest through backpropagation.[22][39]

During the 2000s it fell out of favour, but returned in the 2010s, benefitting from cheap, powerful GPU-based computing systems. This has been especially so in speech recognition, machine vision, natural language processing, and language structure learning research (in which it has been used to explain a variety of phenomena related to first[40] and second language learning.[41]).

Error backpropagation has been suggested to explain human brain ERP components like the N400 and P600.[42]