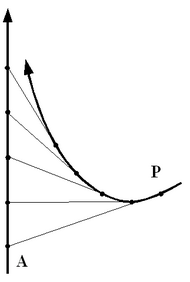 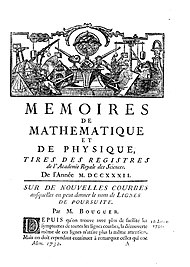 The pursuit curve was first studied by Pierre Bouguer in 1732. In an article on navigation, Bouguer defined a curve of pursuit to explore the way in which one ship might maneuver while pursuing another.[1]

Leonardo da Vinci has occasionally been credited with first exploring curves of pursuit. However Paul J. Nahin, having traced such accounts as far back as the late 19th century, indicates that these anecdotes are unfounded.[2] 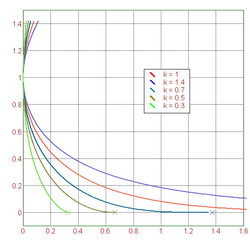 Curves of pursuit with different parameters

The path followed by a single pursuer, following a pursuee that moves at constant speed on a line, is a radiodrome.

Curve of pursuit of vertices of a square (the mice problem for n=4).

Typical drawings of curves of pursuit have each point acting as both pursuer and pursuee, inside a polygon, and having each pursuer pursue the adjacent point on the polygon. An example of this is the mice problem.