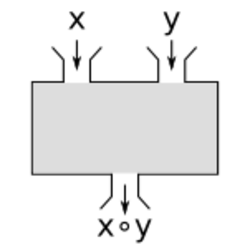 An operation of arity two that involves several sets is sometimes also called a binary operation. For example, scalar multiplication of vector spaces takes a scalar and a vector to produce a vector, and scalar product takes two vectors to produce a scalar. Such binary operations may be called simply binary functions.

Binary operations are the keystone of most algebraic structures that are studied in algebra, in particular in semigroups, monoids, groups, rings, fields, and vector spaces.

More precisely, a binary operation on a set S is a mapping of the elements of the Cartesian product S × S to S:[1][2][3]

Because the result of performing the operation on a pair of elements of S is again an element of S, the operation is called a closed (or internal) binary operation on S (or sometimes expressed as having the property of closure).[4]

Sometimes, especially in computer science, the term binary operation is used for any binary function.

Typical examples of binary operations are the addition (+) and multiplication (×) of numbers and matrices as well as composition of functions on a single set. For instance,

The first three examples above are commutative and all of the above examples are associative.

Binary operations are often written using infix notation such as a ∗ b, a + b, a · b or (by juxtaposition with no symbol) ab rather than by functional notation of the form f(a, b). Powers are usually also written without operator, but with the second argument as superscript.

Binary operations are sometimes written using prefix or (more frequently) postfix notation, both of which dispense with parentheses. They are also called, respectively, Polish notation and reverse Polish notation.

An example of an external binary operation is scalar multiplication in linear algebra. Here K is a field and S is a vector space over that field.

The dot product of two vectors maps S × S to K, where K is a field and S is a vector space over K. It depends on authors whether it is considered as a binary operation.