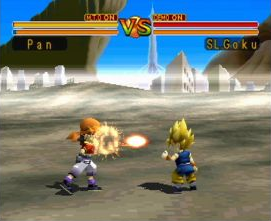 The game is similar to other fighters, playing out entirely in two dimensions but featuring 3D environments and characters from the Z and GT series of the Dragon Ball franchise.[1] The fighters can fly to almost any point on the playing field.[1] Unique in the game are the special ki attacks called a Special Knockout Trick. These are the spectacular versions of the character's ki attacks the character performs at a distance. When these attacks are performed, the camera cuts and pans to the attacking character, who powers up and fires. During the attacking character's power up, the opposing character has the opportunity to either retaliate or block when the word counter flashes on the lower right hand corner of the screen. If the player chooses to retaliate, they too power up and fire a ki attack, causing a power crossfire.[2] Whichever player presses their beam button the fastest will push their opponent's super back and force their own super to damage their opponent.[1] Another feature which was carried over from Legends, is a technique called Meteor Smash. With a key combo, players can ignite a chain of mêlée attacks.[2]

The standard mode, subdivided in "Vs Man", where a player can face another player, and "Vs Com", where the player fights a series of random CPU-controlled opponents and a final boss.

Subdivided in "The Tournament", in which up to 8 characters (either human or computer controlled) fight in a single-round elimination tournament, and "Build up the Tournament", where the characters are carried over from Build Up Mode, loaded from the memory card.

The game's roster features a unique match-up from the Dragon Ball Z and GT series, primarily starting with the principal cast from the GT series: Goku, Trunks, and Pan. Regarding the latter, this was also the first game to feature her, while other characters Vegeta, Gohan, Piccolo, Cell, Frieza, and Buu came straight from the Z series. The only unplayable character is Baby Vegeta in his Oozaru form, serving as the game's final boss. The unlockable characters consist of the adult Super Saiyan form of Goku in his GT outfit, the Super Saiyan forms of GT kid Goku and Trunks, Z series Super Saiyan Goku, Super Saiyan Future Trunks, Vegeto and the Super Saiyan 4 form of Goku.

The original Japanese release of the game was unique for its naming conventions for all the characters. All the adult incarnations of Goku are referred by his full name "Son Goku" (孫悟空) while his child incarnation is referred simply as "Goku" (悟空), and his Z series incarnation is presented in all capital rōmaji "SON GOKOU". GT Trunks is referred by his katakana "トランクス", while Future Trunks is presented in all capital English text "TRUNKS". Nearly all Super Saiyan characters are referred with the prefix Super (超), and Super Saiyan 4 Goku is referred as "Super 4 Son Goku" (超4孫悟空). This also applies to the super form of Oozaru Baby Vegeta who is referred as "Super Baby" (スーパーベビー). Both Vegeta and Vegito are simply referred as Vegeta and Vegetto and not Super Vegeta and Super Vegito despite they are both in Super Saiyan form. Finally, Kid Buu is referred as simply "Buu" (ブウ).

Bandai kept Final Bout under wraps for most of its development. Responding to rumors that Dragon Ball Z: The Legend was being released in the U.S., Jeff Rotter, associate producer of Bandai of America, said that negotiations were underway to bring a Dragon Ball Z game to North America, but did not identify the game.[3] Final Bout's surprise unveiling at the 1997 Tokyo Toy Show came when the game was half-finished and less than six months away from its Japanese release.[4]

Script error: No such module "Unsubst-infobox". The composition was done once again by Kenji Yamamoto. Out of all the pieces used in game, only five were new material, and the rest were remixed arrangements of previously used music from both 16- and 32-bit eras. The game also featured four brand new songs, the opening theme "Biggest Fight", the closing themes "Kimi o Wasurenai" and "Thank You", and Goku's Super Saiyan 4 theme "Hero of Heroes". All of these songs were performed by Hironobu Kageyama with Kuko providing backup vocals. On September 16, 1997, nine of the compositions and the four songs were released by Zain Records exclusive in Japan as Dragon Ball Final Bout: Original Soundtrack (ドラゴンボール ファイナルバウト オリジナルサウンドトラック, Doragon Bōru Fainaru Bauto Orijinaru Saundotorakku). The Future Trunks theme arrangement "Hikari no Willpower" was featured as a hidden bonus track.

In 2002, the game saw a release in the UK, along with other European countries that previously didn't officially receive the game, though it had already seen widespread distribution through the grey market. Finally, under little fanfare, Atari reissued the game in 2004 with brand new artwork supplied by Toei Animation. This release coincided with Funimation's dub of Dragon Ball GT.

When the game was released throughout North America, several changes were made for localization. Dialog by the Japanese voice actors was replaced, but not by the then current voice cast at Ocean Group. Instead, Bandai America decided to use an uncredited cast of U.S. voice talent. However, the battle voices still consist of the Japanese voice cast, causing the character voices to clash. The game's opening theme, "Biggest Fight", was replaced with an untitled instrumental rock track. The cast credits at the end of the game, also set to "Biggest Fight", were removed completely. The two closing songs "Kimi o Wasurenai" and "Thank You!" remain instrumental even when the game is beaten on normal and difficult settings. However, Super Saiyan 4 Goku's theme, "Hero of Heroes", was left unchanged. At the title screen, the game's sound test is available, whereas in the original Japanese players could only access it with a cheat code. The Buildup data transfer option was removed due to the fact Ultimate Battle 22 had not been released at that time. When the game was reissued in 2004, the game's data was not altered in any way from its 1997 North American release by Bandai.

The European 1997 version, like with most European Dragon Ball Z games from the 16-bit and 32-bit era, was released mostly unaltered from the Japanese version, featuring the original Japanese voice acting and the opening theme "Biggest Fight". The game text was only translated to French and other languages besides English because of the lack of official release in any English-speaking country. When the game was re-issued in Europe in 2002 (which included a release for the first time in English-speaking countries like the UK), the game was kept the same as the previous European version except for the texts being re-translated to English.

Commentary on the game has varied widely; while most reviews were negative, they gave differing reasons for why the game failed. Some of the more common criticisms were that the pace is too slow,[8][11] the camera is jerky and confusing due to a lack of panning and opponents' ability to move out of view,[9][10] and the controls respond too slowly to button presses.[8][9][10] American critic Jeff Gerstmann reviewed the Japanese release of the game as an import for GameSpot, despite acknowledging that a U.S. release was a near certainty by this time. He praised the visual spectacle of the beam clashes, but found the gameplay suffers from a lack of variety in both the characters and the move sets.[11] IGN also found the move sets lacking, but primarily criticized the controls, concluding, "If you're a Dragon Ball Z fan, then you may like this game, simply because it stars all your favorite Dragon Ball characters. But to be honest, you might as well go out and buy all the toys -- at least they're more controllable."[9] GamePro instead focused criticism on the Meteo moves, which the reviewer called "one of the cheapest, longest-lasting special moves in fighting history". He also derided the sparse backgrounds, breakup in the character models, and childish taunts.[12]

The game did receive positive assessments from most of the four-person Electronic Gaming Monthly review crew, with Sushi-X calling it "a 'guru game', a game that stretches our abilities with a game engine so complex to master, yet simple enough for a beginner" and taking a more positive perspective on the taunts, describing them as "hilarious". Co-reviewer John Ricciardi agreed that it is a very different sort of fighting game which proves rewarding for those who adjust to its quirks, and Kelly Rickards said it is clearly superior to previous Dragon Ball games, while Dan Hsu fell more in line with the majority opinion, summarizing that "It's different, but frankly, most of you won't like it."[8] Next Generation called it "inarguably the worst PlayStation fighting game ever made", complaining that the character models do not resemble the Dragon Ball characters closely enough and ridiculing how characters in flight use the same poses as when they are standing.[10] This contradicted IGN, who had described the character models as "very true to their anime counterparts".[9]