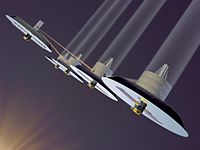 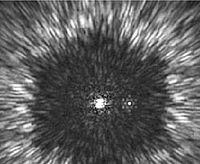 A simulated view of the coronagraph for Terrestrial Planet Finder. (Courtesy NASA/JPL-Caltech)

The Terrestrial Planet Finder (TPF) was a proposed project by NASA to construct a system of space telescopes for detecting extrasolar terrestrial planets. TPF was postponed several times and finally cancelled in 2011.[1][2] There were two telescope systems under consideration, the TPF-I, which had several small telescopes, and TPF-C, which used one large telescope.

In May 2002, NASA chose two TPF mission architecture concepts for further study and technology development. Each would use a different means to achieve the same goal—to block the light from a parent star in order to see its much smaller, dimmer planets. The technological challenge of imaging planets near their much brighter star has been likened to finding a firefly near the beam of a distant searchlight. Additional goals of the mission would include the characterization of the surfaces and atmospheres of newfound planets, and looking for the chemical signatures of life.

The two planned architectures were:

NASA and Jet Propulsion Laboratory (JPL) were to issue calls for proposals seeking input on the development and demonstration of technologies to implement the two architectures, and on scientific research relevant to planet finding. Launch of TPF-C had been anticipated to occur around 2014, and TPF-I possibly by 2020.

According to NASA's 2007 budget documentation, released on 6 February 2006,[3] the project was deferred indefinitely.[4]

In June 2006, a House of Representatives subcommittee voted to provide funding for the TPF along with the long-sought mission to Europa, a moon of Jupiter that might harbor extraterrestrial life.[5] Congressional spending limits under House Resolution 20 passed on 31 January 2007, by the United States House of Representatives and 14 February by the U.S. Senate postponed the program indefinitely. Actual funding has not materialized, and TPF remains a concept.[6] In June 2011, the TPF (and SIM) programs were reported as "cancelled".[1]