Mariner 9 (Mariner Mars '71 / Mariner-I) was a robotic spacecraft that contributed greatly to the exploration of Mars and was part of the NASA Mariner program. Mariner 9 was launched toward Mars on May 30, 1971[1][2] from LC-36B at Cape Canaveral Air Force Station , Florida, and reached the planet on November 14 of the same year,[1][2] becoming the first spacecraft to orbit another planet[3] – only narrowly beating the Soviet probes Mars 2 (launched May 19) and Mars 3 (launched May 28), which both arrived at Mars only weeks later.

After the occurrence of dust storms on the planet for several months following its arrival, the orbiter managed to send back clear pictures of the surface. Mariner 9 successfully returned 7,329 images over the course of its mission, which concluded in October 1972.[4] 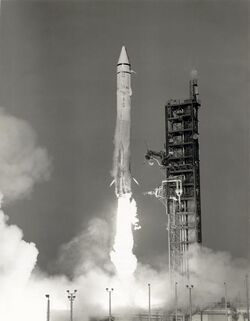 Mariner 9 was designed to continue the atmospheric studies begun by Mariner 6 and 7, and to map over 70% of the Martian surface from the lowest altitude (1,500 kilometers (930 mi)) and at the highest resolutions (from 1 kilometer to 100 meters (1,100 to 110 yards) per pixel) of any Mars mission up to that point. An infrared radiometer was included to detect heat sources in search of evidence of volcanic activity. It was to study temporal changes in the Martian atmosphere and surface. Mars' two moons were also to be analyzed. Mariner 9 more than met its objectives.

Under original plans, a dual mission was to be flown like Mariners 6–7, however the launch failure of Mariner 8 ruined this scheme and forced NASA planners to fall back on a simpler one-probe mission. NASA still held out hope that another Mariner probe and Atlas-Centaur could be readied before the 1971 Mars launch window closed. A few logistical problems emerged, including the lack of an available Centaur payload shroud of the correct configuration for the Mariner probes, however there was a shroud in NASA's inventory which could be modified. Convair also had an available Centaur stage on hand and could have an Atlas readied in time, but the idea was ultimately abandoned for lack of funding.

Mariner 9 was mated to Atlas-Centaur AC-23 on May 9 with investigation into Mariner 8's failure ongoing. The malfunction was traced to a problem in the Centaur's pitch control servoamplifier and because it was not clear if the spacecraft itself had been responsible, RFI testing was conducted on Mariner 9 to ensure the probe was not releasing interference that could cause problems with the Centaur's electronics. All testing came back negative and on May 22, a tested and verified rate gyro package arrived from Convair and was installed in the Centaur.

Liftoff took place on May 30 at 22:23:04 UT.[5] All launch vehicle systems performed normally and the Mariner separated from the Centaur at 13 minutes and 18 seconds after launch.

Mariner 9 view of the Noctis Labyrinthus "labyrinth" at the western end of Valles Marineris.

Mariner 9 was the first spacecraft to orbit another planet. It carried an instrument payload similar to Mariners 6 and 7, but because of the need for a larger propulsion system to control the spacecraft in Martian orbit, it weighed more than Mariners 6 and 7 combined.[6]

When Mariner 9 arrived at Mars on November 14, 1971, planetary scientists were surprised to find the atmosphere was thick with "a planet-wide robe of dust, the largest storm ever observed." The surface was totally obscured. Mariner 9's computer was thus reprogrammed from Earth to delay imaging of the surface for a couple of months until the dust settled. The main surface imaging did not get underway until mid-January 1972. However, surface-obscured images did contribute to the collection of Mars science, including understanding of the existence of several huge high-altitude volcanoes of the Tharsis Bulge that gradually became visible as the dust storm abated. This unexpected situation made a strong case for the desirability of studying a planet from orbit rather than merely flying past.[6] It also highlighted the importance of flexible mission software. The Soviet Union's Mars 2 and Mars 3 probes, which arrived during the same dust storm, were unable to adapt to the unexpected conditions, which severely limited the amount of data that they were able to collect.

After 349 days in orbit, Mariner 9 had transmitted 7,329 images, covering 85% of Mars' surface, whereas previous flyby missions had returned less than one thousand images covering only a small portion of the planetary surface.[7] The images revealed river beds, craters, massive extinct volcanoes (such as Olympus Mons, the largest known volcano in the Solar System; Mariner 9 led directly to its reclassification from Nix Olympica), canyons (including the Valles Marineris, a system of canyons over about 4,020 kilometres (2,500 mi) long), evidence of wind and water erosion and deposition, weather fronts, fogs, and more.[8] Mars' small moons, Phobos and Deimos, were also photographed.[9][10]

The findings from the Mariner 9 mission underpinned the later Viking program.[6]

The enormous Valles Marineris canyon system is named after Mariner 9 in honor of its achievements.[6]

After depleting its supply of attitude control gas, the spacecraft was turned off on October 27, 1972.[6] 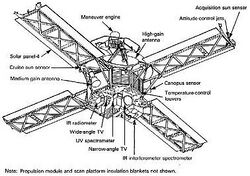 A schematic of Mariner 9, showing the major components and features

The Infrared Radiometer (IRR) team was led by Professor Gerald Neugebauer from the California Institute of Technology (Caltech).

To control for errors in the reception of the grayscale image data sent by Mariner 9 (caused by a low signal-to-noise ratio), the data had to be encoded before transmission using a so-called forward error-correcting code (FEC). Without FEC, noise would have made up roughly a quarter of a received image, while the FEC encoded the data in a redundant way which allowed for the reconstruction of most of the sent image data at reception.

Since the flown hardware was constrained with regards to weight, power consumption, storage, and computing power, some considerations had to be put into choosing an FEC, and it was decided to use a Hadamard code for Mariner 9. Each image pixel was represented as a six-bit binary value, which had 64 possible grayscale levels. Because of limitations of the transmitter, the maximum useful data length was about 30 bits. Instead of using a repetition code, a [32, 6, 16] Hadamard code was used, which is also a 1st-order Reed-Muller code. Errors of up to seven bits per each 32-bit word could be corrected using this scheme.[11][12] Compared to a five-repetition code, the error correcting properties of this Hadamard code were much better, yet its data rate was comparable. The efficient decoding algorithm was an important factor in the decision to use this code. The circuitry used was called the "Green Machine", which employed the fast Fourier transform, increasing the decoding speed by a factor of three.[13]

As of February 2022, Mariner 9's location is unknown; it is either still in orbit, or has already burned up in the Martian atmosphere or crashed into the surface of Mars.

NASA has provided multiple dates for when Mariner 9 could enter the Martian atmosphere. In 2011, NASA predicted that Mariner 9 would burn up or crash into Mars around 2022.[14] However, a 2018 revision to the Mariner 9 mission page by NASA expected Mariner 9 would crash into Mars "sometime around 2020".[15] At the time of the mission, Mariner 9 was left in an orbit that would not decay for at least 50 years, which placed the earliest date of atmospheric entry to October 2022.[16]