Mars Global Surveyor (MGS) was an American robotic spacecraft developed by NASA's Jet Propulsion Laboratory and launched November 1996. Mars Global Surveyor was a global mapping mission that examined the entire planet, from the ionosphere down through the atmosphere to the surface.[2] As part of the larger Mars Exploration Program, Mars Global Surveyor performed monitoring relay for sister orbiters during aerobraking, and it helped Mars rovers and lander missions by identifying potential landing sites and relaying surface telemetry.[2]

It completed its primary mission in January 2001 and was in its third extended mission phase when, on 2 November 2006, the spacecraft failed to respond to messages and commands. A faint signal was detected three days later which indicated that it had gone into safe mode. Attempts to recontact the spacecraft and resolve the problem failed, and NASA officially ended the mission in January 2007.

The Surveyor spacecraft, fabricated at the Lockheed Martin Astronautics plant in Denver, is a rectangular-shaped box with wing-like projections (solar panels) extending from opposite sides. When fully loaded with propellant at the time of launch, the spacecraft weighed 1,060 kg (2,337 lb). Most of Surveyor's mass lies in the box-shaped module occupying the center portion of the spacecraft. This center module is made of two smaller rectangular modules stacked on top of each other, one of which is called the equipment module and holds the spacecraft's electronics, science instruments, and the 1750A mission computer. The other module, called the propulsion module, houses Surveyor's rocket engines and propellant tanks. The Mars Global Surveyor mission cost about $154 million to develop and build and $65 million to launch. Mission operations and data analysis cost approximately $20 million/year.[4]

The Mars Relay antenna supported the Mars Exploration Rovers for data relay back to Earth in conjunction with the Mars Orbiter Camera's 12 MB memory buffer. In total, more than 7.6 gigabits of data were transferred this way.[9][10]

The Surveyor spacecraft was launched from the Cape Canaveral Air Station in Florida on 7 November 1996 aboard a Delta II rocket. The spacecraft traveled nearly 750 million kilometers (466 million miles) over the course of a 300-day cruise to reach Mars on 11 September 1997.

Upon reaching Mars, Surveyor fired its main rocket engine for the 22-minute Mars orbit insertion (MOI) burn. This maneuver slowed the spacecraft and allowed the planet's gravity to capture it into orbit. Initially, Surveyor entered a highly elliptical orbit that took 45 hours to complete. The orbit had a periapsis of 262 km (163 mi) above the northern hemisphere, and an apoapsis of 54,026 km (33,570 mi) above the southern hemisphere.

This image taken by Mars Global Surveyor spans a region about 1,500 m (4,921 ft) across, showing gullies on the walls of Newton Basin in Sirenum Terra. Similar channels on Earth are formed by flowing water, but on Mars the temperature is normally too cold and the atmosphere too thin to sustain liquid water. Nevertheless, many scientists hypothesize that liquid groundwater can sometimes surface on Mars, erode gullies and channels, and pool at the bottom before freezing and evaporating.

After orbital insertion, Surveyor performed a series of orbit changes to lower the periapsis of its orbit into the upper fringes of the Martian atmosphere at an altitude of about 110 km (68 mi). During every atmospheric pass, the spacecraft slowed down by a slight amount because of atmospheric resistance. The density of the Martian atmosphere at such altitudes is comparatively low, allowing this procedure to be performed without damage to the spacecraft. This slowing caused the spacecraft to lose altitude on its next pass through the orbit's apoapsis. Surveyor used this aerobraking technique over a period of four months to lower the high point of its orbit from 54,000 km (33,554 mi) to altitudes near 450 km (280 mi).

On 11 October, the flight team performed a maneuver to raise the periapsis out of the atmosphere. This suspension of aerobraking was performed because air pressure from the atmosphere caused one of Surveyor's two solar panels to bend backward by a slight amount. The panel in question was slightly damaged shortly after launch in November 1996. Aerobraking was resumed on 7 November after flight team members concluded that aerobraking was safe, provided that it occurs at a more gentle pace than proposed by the original mission plan.

Under the new mission plan, aerobraking occurred with the low point of the orbit at an average altitude of 120 km (75 mi), as opposed to the original altitude of 110 km (68 mi). This slightly higher altitude resulted in a decrease of 66 percent in terms of air resistance pressure experienced by the spacecraft. During these six months, aerobraking reduced the orbit period to between 12 and 6 hours.

From May to November 1998, aerobraking was temporarily suspended to allow the orbit to drift into the proper position with respect to the Sun. Without this hiatus, 'Surveyor' would complete aerobraking with its orbit in the wrong solar orientation. In order to maximize the efficiency of the mission, these six months were devoted to collecting as much science data as possible. Data was collected between two and four times per day, at the low point of each orbit.

Finally, from November 1998 to March 1999, aerobraking continued and shrank the high point of the orbit down to 450 km (280 mi). At this altitude, Surveyor circled Mars once every two hours. Aerobraking was scheduled to terminate at the same time the orbit drifted into its proper position with respect to the Sun. In the desired orientation for mapping operations, the spacecraft always crossed the day-side equator at 14:00 (local Mars time) moving from south to north. This geometry was selected to enhance the total quality of the science return.

High resolution topographic map of Mars based on the Mars Global Surveyor laser altimeter research led by Maria Zuber and David Smith. North is at the top. Notable features include the Tharsis volcanoes in the west (including Olympus Mons), Valles Marineris to the east of Tharsis, and Hellas basin in the southern hemisphere. 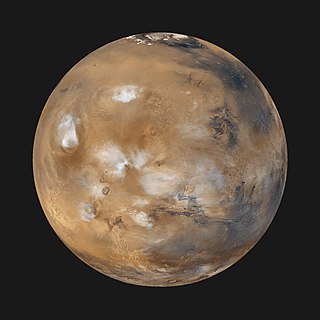 The spacecraft circled Mars once every 117.65 minutes at an average altitude of 378 km (235 mi). It is in a near polar orbit (inclination = 93°) which is almost perfectly circular, moving from being over the south pole to being over the north pole in just under an hour. The altitude was chosen to make the orbit Sun-synchronous, so that all images that were taken by the spacecraft of the same surface features on different dates were taken under identical lighting conditions. After each orbit, the spacecraft viewed the planet 28.62° to the west because Mars had rotated underneath it. In effect, it was always 14:00 for Mars Global Surveyor as it moved from one time zone to the next exactly as fast as the Sun. After seven sols and 88 orbits, the spacecraft would approximately retrace its previous path, with an offset of 59 km to the east. This ensured eventual full coverage of the entire surface.

In its extended mission, MGS did much more than study the planet directly beneath it. It commonly performed rolls and pitches to acquire images off its nadir track. The roll maneuvers, called ROTOs (Roll Only Targeting Opportunities), rolled the spacecraft left or right from its ground track to shoot images as much as 30° from nadir. It was possible for a pitch maneuver to be added to compensate for the relative motion between the spacecraft and the planet. This was called a CPROTO (Compensation Pitch Roll Targeting Opportunity), and allowed for some very high resolution imaging by the onboard MOC (Mars Orbiting Camera).

In addition to this, MGS could shoot pictures of other orbiting bodies, such as other spacecraft and the moons of Mars.[11] In 1998 it imaged what was later called the Phobos monolith, found in MOC Image 55103.[12][13]

After analyzing hundreds of high-resolution pictures of the Martian surface taken by the orbiting Mars Surveyor spacecraft, a team of researchers found that weathering and winds on the planet create landforms, especially sand dunes, remarkably similar to those in some deserts on Earth.[14]

Results from the Mars Global Surveyor primary mission (1996–2001) were published in the Journal of Geophysical Research by M. Malin and K. Edgett.[15] Some of these discoveries are:

Data from MGS have been used to perform a test of the general relativistic Lense–Thirring precession which consists of a small precession of the orbital plane of a test particle moving around a central, rotating mass such as a planet. The interpretation of these results has been debated.[32][33]

Discovery of water ice on Mars

Inner channel on floor of Nanedi Valles that suggests that water flowed for a fairly long period. Image from Lunae Palus quadrangle.

On 6 December 2006 NASA released photos of two craters in Terra Sirenum and Centauri Montes which appear to show the presence of flowing water on Mars at some point between 1999 and 2001. The pictures were produced by Mars Global Surveyor and are quite possibly the spacecraft's final contribution to our knowledge of Mars and the question of whether water exists on the planet.[34][35]

Hundreds of gullies were discovered that were formed from liquid water, possible in recent times. These gullies occur on steep slopes and mostly in certain bands of latitude.[28]

A few channels on Mars displayed inner channels that suggest sustained fluid flows. The most well-known is the one in Nanedi Valles. Another was found in Nirgal Vallis.[28]

On 2 November 2006, NASA lost contact with the spacecraft after commanding it to adjust its solar panels. Several days passed before a faint signal was received indicating that the spacecraft had entered safe mode and was awaiting further instructions.[39][40]

On 20 November 2006, the Mars Reconnaissance Orbiter spacecraft attempted to image Mars Global Surveyor to verify the orientation of the spacecraft.[41] The effort was unsuccessful.

On 21 and 22 November 2006, Mars Global Surveyor failed to relay communications to the Opportunity rover on the surface of Mars. In response to this complication, Mars Exploration Program manager Fuk Li stated, "Realistically, we have run through the most likely possibilities for re-establishing communication, and we are facing the likelihood that the amazing flow of scientific observations from Mars Global Surveyor is over."[42]

Previously, in November 2005, two operators had changed unknowingly, the same parameter on separate copies of the system software. Each operator had used a slightly different precision when inputting a parameter, which resulted in a small but significant difference in the two copies. A subsequent memory readout revealed this inconsistency to the mission's team.
In order to correct the error, an update was drafted in June 2006. However, two memory addresses were incorrectly handled in the update, which could allow values to be written into the wrong memory addresses and further complications with the mission. Five months later, the problematic memory addresses were called, resulting in the solar arrays being driven until they hit a hard stop and became unmovable. The complication led the spacecraft to incorrectly diagnose a failure of a gimbal motor causing the spacecraft to rotate to allow the unmovable solar array to point toward the Sun. However, in this position the remaining usable battery was also directed toward the Sun, resulting in the battery overheating and eventually failing. The spacecraft subsequently went into safe mode and contact with the spacecraft was lost.[39][43]

Originally, the spacecraft was intended to observe Mars for 1 Martian year (approximately 2 Earth years). However, based on the vast amount of valuable science data returned, NASA extended the mission three times. The MGS remains in a stable near-polar circular orbit at about 450 km altitude, and will crash onto the surface of the planet in about 2047.[44][45] 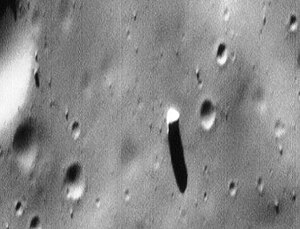