Astronomy:List of artificial objects on Mars

The following table is a partial list of artificial objects on the surface of Mars, consisting of spacecraft which were launched from Earth. Although most are defunct after having served their purpose, the Curiosity rover, InSight lander, Perseverance rover, Ingenuity helicopter, and Zhurong rover are all active. China's Tianwen-1 spacecraft is the most recent artificial object to land safely on Mars, with Mars 3 and Tianwen-1 remote camera the heaviest and lightest Martian spacecraft respectively.

The table does not include smaller objects, such as springs, fragments, parachutes and heat shields. (As of February 2021), there are 14 missions with objects on the surface of Mars. Some of these missions contain multiple spacecraft. 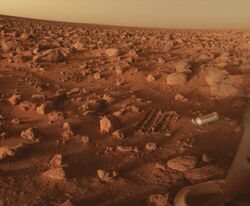 An example of an additional object from a spacecraft landing is the metal shroud ejected by the Viking 2 lander, as seen in this 1977 view of Mars. The shroud covered the surface sampler instrument and could be seen in images taken by the lander while it was active on the surface.[1]

In this listing, it is implied that each mission left debris according to its design. For example, the Schiaparelli EDM lander likely exploded on impact, creating an unknown number of fragments at one location. At another location, there may be a lower heat shield, and at another location, a parachute and upper heat shield. Another example is the counterweights ejected by MSL during its descent. In some cases, the nature and location of this additional debris has been determined and, in other cases, even the location of the main spacecraft has remained unknown. The identification of Beagle 2 after 11 years is one of the greatest breakthroughs yet, since prior to that, it could not be confirmed what had happened.[2] Spacecraft that have not been precisely located include Mars 2, Mars 3, Mars 6, Mars Polar Lander, and the two Deep Space 2 probes.

Combined, the total weight would be 9470 kg.