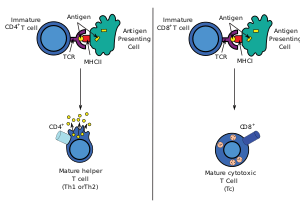 The affinity between CD8 and the MHC molecule keeps the TC cell and the target cell bound closely together during antigen-specific activation. CD8+ T cells are recognized as TC cells once they become activated and are generally classified as having a pre-defined cytotoxic role within the immune system. However, CD8+ T cells also have the ability to make some cytokines. 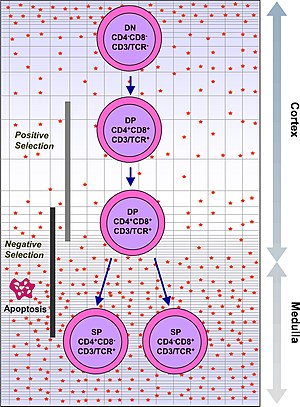 Development of single positive T cells in the thymus

The immune system must recognize millions of potential antigens. There are fewer than 30,000 genes in the human body, so it is impossible to have one gene for every antigen. Instead, the DNA in millions of white blood cells in the bone marrow is shuffled to create cells with unique receptors, each of which can bind to a different antigen. Some receptors bind to tissues in the human body itself, so to prevent the body from attacking itself, those self-reactive white blood cells are destroyed during further development in the thymus, in which iodine is necessary for its development and activity.[1]

TCRs have two parts, usually an alpha and a beta chain. (Some TCRs have a gamma and a delta chain.) Hematopoietic stem cells in the bone marrow migrate into the thymus, where they undergo V(D)J recombination of their beta-chain TCR DNA to form a developmental form of the TCR protein, known as pre-TCR. If that rearrangement is successful, the cells then rearrange their alpha-chain TCR DNA to create a functional alpha-beta TCR complex. This highly-variable genetic rearrangement product in the TCR genes helps create millions of different T cells with different TCRs, helping the body's immune system respond to virtually any protein of an invader. The vast majority of T cells express alpha-beta TCRs (αβ T cells), but some T cells in epithelial tissues (like the gut) express gamma-delta TCRs (gamma delta T cells), which recognize non-protein antigens.

T cells with functionally stable TCRs express both the CD4 and CD8 co-receptors and are therefore termed "double-positive" (DP) T cells (CD4+CD8+). The double-positive T cells are exposed to a wide variety of self-antigens in the thymus and undergo two selection criteria:

Only those T cells that bind to the MHC-self-antigen complexes weakly are positively selected. Those cells that survive positive and negative selection differentiate into single-positive T cells (either CD4+ or CD8+), depending on whether their TCR recognizes an MHC class I-presented antigen (CD8) or an MHC class II-presented antigen (CD4). It is the CD8+ T-cells that will mature and go on to become cytotoxic T cells following their activation with a class I-restricted antigen. 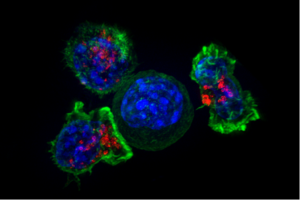 In this immunofluorescence image, a group of killer T cells (outer three) is engaging a cancer cell (centered one). A patch of signaling molecules (pink) that gathers at the site of cell-cell contact indicates that the CTL has identified a target. Lytic granules (red) that contain cytotoxic components then travel along the microtubule cytoskeleton (green) to the contact site and are secreted, thus killing the target.

With the exception of some cell types, such as non-nucleated cells (including erythrocytes), Class I MHC is expressed by all host cells. When these cells are infected with a virus (or another intracellular pathogen), the cells degrade foreign proteins via antigen processing. These result in peptide fragments, some of which are presented by MHC Class I to the T cell antigen receptor (TCR) on CD8+ T cells.

While in most cases activation is dependent on TCR recognition of antigen, alternative pathways for activation have been described. For example, cytotoxic T cells have been shown to become activated when targeted by other CD8 T cells leading to tolerization of the latter.[5]

Once activated, the TC cell undergoes clonal expansion with the help of the cytokine Interleukin-2 (IL-2), which is a growth and differentiation factor for T cells. This increases the number of cells specific for the target antigen that can then travel throughout the body in search of antigen-positive somatic cells.

When exposed to infected/dysfunctional somatic cells, TC cells release the cytotoxins perforin, granzymes, and granulysin. Through the action of perforin, granzymes enter the cytoplasm of the target cell and their serine protease function triggers the caspase cascade, which is a series of cysteine proteases that eventually lead to apoptosis (programmed cell death).

A second way to induce apoptosis is via cell-surface interaction between the TC and the infected cell. When a TC is activated it starts to express the surface protein FAS ligand (FasL)(Apo1L)(CD95L), which can bind to Fas (Apo1)(CD95) molecules expressed on the target cell. However, this Fas-Fas ligand interaction is thought to be more important to the disposal of unwanted T lymphocytes during their development or to the lytic activity of certain TH cells than it is to the cytolytic activity of TC effector cells. Engagement of Fas with FasL allows for recruitment of the death-induced signaling complex (DISC).[6] The Fas-associated death domain (FADD) translocates with the DISC, allowing recruitment of procaspases 8 and 10.[6] These caspases then activate the effector caspases 3, 6, and 7, leading to cleavage of death substrates such as lamin A, lamin B1, lamin B2, PARP (poly ADP ribose polymerase), and DNA-PKcs (DNA-activated protein kinase). The final result is apoptosis of the cell that expressed Fas.

During hepatitis B virus (HBV) infection cytotoxic T cells kill infected cells and produce antiviral cytokines capable of purging HBV from viable hepatocytes. They also play an important pathogenic role, contributing to nearly all of the liver injury associated with HBV infection.[8] Platelets have been shown to facilitate the accumulation of virus-specific cytotoxic T cells into the infected liver.[9]

Cytotoxic T cells have been implicated in the progression of arthritis: depletion of knee joint cartilage macromolecules such as glycosaminoglycans by cytotoxic T cells and macrophages has been observed in a rat model of the disease.[10]

CD8+ T cells have been found to play a role in HIV infection. HIV over time has developed many strategies to evade the host cell immune system. For example, HIV has adopted very high mutation rates to allow them to escape recognition by CD8+ T cells.[11] They are also able to down-regulate expression of surface MHC Class I proteins of cells that they infect, in order to further evade destruction by CD8+ T cells.[11] If CD8+ T cells cannot find, recognize and bind to infected cells, the virus will not be destroyed and will continue to grow.

Furthermore, it has been recently discovered that CD8+ T cells play a critical role in Type 1 diabetes.[12] It was previously thought that this autoimmune disease was exclusively controlled by CD4+ cells - but recent studies in a diabetic mouse model showed that CD8+ T cells also engaged in the destruction of insulin-producing pancreatic cells.[12]