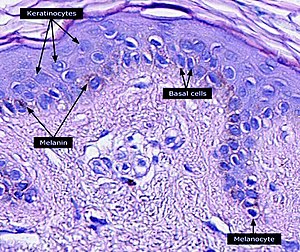 Micrograph of keratinocytes, basal cells and melanocytes in the epidermis

Keratinocytes (stained green) in the skin of a mouse

Keratinocytes constitute 90% of the cells of the epidermis, the outermost layer of the skin. [1] Basal cells in the basal layer (stratum basale) of the skin, are sometimes referred to as basal keratinocytes.[2]

The primary function of keratinocytes is the formation of a barrier against environmental damage by heat, UV radiation, water loss, pathogenic bacteria, fungi, parasites, and viruses.

Pathogens invading the upper layers of the epidermis can cause keratinocytes to produce proinflammatory mediators, particularly chemokines such as CXCL10 and CCL2 (MCP-1) which attract monocytes, natural killer cells, T-lymphocytes, and dendritic cells to the site of pathogen invasion.[3]

A number of structural proteins (filaggrin, keratin), enzymes (proteases), lipids, and antimicrobial peptides (defensins) contribute to maintain the important barrier function of the skin. Keratinization is part of the physical barrier formation (cornification), in which the keratinocytes produce more and more keratin and undergo terminal differentiation. The fully cornified keratinocytes that form the outermost layer are constantly shed off and replaced by new cells.[4]

Epidermal stem cells reside in the lower part of the epidermis (stratum basale) and are attached to the basement membrane through hemidesmosomes. Epidermal stem cells divide in a random manner yielding either more stem cells or transit amplifying cells.[5] Some of the transit amplifying cells continue to proliferate then commit to differentiate and migrate towards the surface of the epidermis. Those stem cells and their differentiated progeny are organized into columns named epidermal proliferation units.[6]

During this differentiation process, keratinocytes permanently withdraw from the cell cycle, initiate expression of epidermal differentiation markers, and move suprabasally as they become part of the stratum spinosum, stratum granulosum, and eventually corneocytes in the stratum corneum.

Corneocytes are keratinocytes that have completed their differentiation program and have lost their nucleus and cytoplasmic organelles.[7] Corneocytes will eventually be shed off through desquamation as new ones come in.

At each stage of differentiation, keratinocytes express specific keratins, such as keratin 1, keratin 5, keratin 10, and keratin 14, but also other markers such as involucrin, loricrin, transglutaminase, filaggrin, and caspase 14.

In humans, it is estimated that keratinocytes turn over from stem cells to desquamation every 40–56 days,[8] whereas in mice the estimated turnover time is 8–10 days.[9]

Interaction with other cells:

Within the epidermis keratinocytes are associated with other cell types such as melanocytes and Langerhans cells. Keratinocytes form tight junctions with the nerves of the skin and hold the Langerhans cells and intra-dermal lymphocytes in position within the epidermis. Keratinocytes also modulate the immune system: apart from the above-mentioned antimicrobial peptides and chemokines they are also potent producers of anti-inflammatory mediators such as IL-10 and TGF-β. When activated, they can stimulate cutaneous inflammation and Langerhans cell activation via TNFα and IL-1β secretion.(citation?)

Keratinocytes contribute to protecting the body from ultraviolet radiation (UVR) by taking up melanosomes, vesicles containing the endogenous photoprotectant melanin, from epidermal melanocytes. Each melanocyte in the epidermis has several dendrites that stretch out to connect it with many keratinocytes. The melanin is then stored within keratinocytes and melanocytes in the perinuclear area as supranuclear “caps”, where it protects the DNA from UVR-induced damage.[27]

At the opposite, epidermal keratinocytes, can contribute to de novo hair follicle formation during the healing of large wounds.[30]

A sunburn cell is a keratinocyte with a pyknotic nucleus and eosinophilic cytoplasm that appears after exposure to UVC or UVB radiation or UVA in the presence of psoralens. It shows premature and abnormal keratinization, and has been described as an example of apoptosis.[32][33]