An adverse drug reaction (ADR) is a harmful, unintended result caused by taking medication.[1] ADRs may occur following a single dose or prolonged administration of a drug or result from the combination of two or more drugs. The meaning of this term differs from the term "side effect" because side effects can be beneficial as well as detrimental.[2] The study of ADRs is the concern of the field known as pharmacovigilance. An adverse drug event (ADE) refers to any unexpected and inappropriate occurrence at the time a drug is used, whether or not associated with the administration of the drug.[1] An ADR is a special type of ADE in which a causative relationship can be shown. ADRs are only one type of medication-related harm, as harm can also be caused by omitting to take indicated medications.[3]

ADRs may be classified by e.g. cause and severity.

Type A reactions, which constitute approximately 80% of adverse drug reactions, are usually a consequence of the drug's primary pharmacological effect (e.g. bleeding when using the anticoagulant warfarin) or a low therapeutic index of the drug (e.g. nausea from digoxin), and they are therefore predictable. They are dose-related and usually mild, although they may be serious or even fatal (e.g. intracranial bleeding from warfarin). Such reactions are usually due to inappropriate dosage, especially when drug elimination is impaired. The term 'side effects' is often applied to minor type A reactions.[4]

Types A and B were proposed in the 1970s,[5] and the other types were proposed subsequently when the first two proved insufficient to classify ADRs.[6]

The U.S Food and Drug Administration defines a serious adverse event as one when the patient outcome is one of the following:[7]

Severity is a point on an arbitrary scale of intensity of the adverse event in question. The terms "severe" and "serious", when applied to adverse events, are technically very different. They are easily confused but can not be used interchangeably, requiring care in usage.

A headache is severe if it causes intense pain. There are scales like "visual analog scale" that help clinicians assess the severity. On the other hand, a headache is not usually serious (but may be in case of subarachnoid haemorrhage, subdural bleed, even a migraine may temporally fit criteria), unless it also satisfies the criteria for seriousness listed above.

Adverse effects may be local, i.e. limited to a certain location, or systemic, where medication has caused adverse effects throughout the systemic circulation.

For instance, some ocular antihypertensives cause systemic effects,[8] although they are administered locally as eye drops, since a fraction escapes to the systemic circulation. 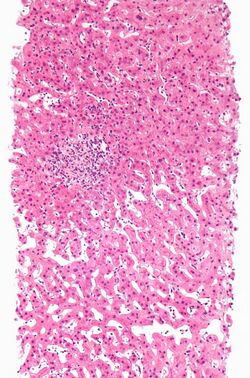 As research better explains the biochemistry of drug use, fewer ADRs are Type B and more are Type A. Common mechanisms are:

Various diseases, especially those that cause renal or hepatic insufficiency, may alter drug metabolism. Resources are available that report changes in a drug's metabolism due to disease states.[9]

The Medication Appropriateness Tool for Comorbid Health Conditions in Dementia[10] (MATCH-D) criteria warns that people with dementia are more likely to experience adverse effects, and that they are less likely to be able to reliably report symptoms.[11]

Abnormal drug metabolism may be due to inherited factors of either Phase I oxidation or Phase II conjugation.[12][13] Pharmacogenomics is the study of the inherited basis for abnormal drug reactions.

Inheriting abnormal alleles of cytochrome P450 can alter drug metabolism. Tables are available to check for drug interactions due to P450 interactions.[14][15]

Inheriting abnormal N-acetyltransferase which conjugated some drugs to facilitate excretion may affect the metabolism of drugs such as isoniazid, hydralazine, and procainamide.[15][16]

Inheriting abnormal thiopurine S-methyltransferase may affect the metabolism of the thiopurine drugs mercaptopurine and azathioprine.[15]

Interactions with other drugs

The risk of drug interactions is increased with polypharmacy.

These interactions are usually transient and mild until a new steady state is achieved.[17][18] These are mainly for drugs without much first-pass liver metabolism. The principal plasma proteins for drug binding are:[19]

Some drug interactions with warfarin are due to changes in protein binding.[19]

An example of synergism is two drugs that both prolong the QT interval.

Causality assessment is used to determine the likelihood that a drug caused a suspected ADR. There are a number of different methods used to judge causation, including the Naranjo algorithm, the Venulet algorithm and the WHO causality term assessment criteria. Each have pros and cons associated with their use and most require some level of expert judgement to apply.[20] An ADR should not be labeled as 'certain' unless the ADR abates with a challenge-dechallenge-rechallenge protocol (stopping and starting the agent in question). The chronology of the onset of the suspected ADR is important, as another substance or factor may be implicated as a cause; co-prescribed medications and underlying psychiatric conditions may be factors in the ADR.[2]

Assigning causality to a specific agent often proves difficult, unless the event is found during a clinical study or large databases are used. Both methods have difficulties and can be fraught with error. Even in clinical studies some ADRs may be missed as large numbers of test individuals are required to find that adverse drug reaction. Psychiatric ADRs are often missed as they are grouped together in the questionnaires used to assess the population.[21][22]

Many countries have official bodies that monitor drug safety and reactions. On an international level, the WHO runs the Uppsala Monitoring Centre, and the European Union runs the European Medicines Agency (EMA). In the United States , the Food and Drug Administration (FDA) is responsible for monitoring post-marketing studies. In Canada, the Marketed Health Products Directorate of Health Canada is responsible for the surveillance of marketed health products. In Australia , the Therapeutic Goods Administration (TGA) conducts postmarket monitoring of therapeutic products. In the UK the Yellow Card Scheme was established in 1963.

A study by the Agency for Healthcare Research and Quality (AHRQ) found that in 2011, sedatives and hypnotics were a leading source for adverse drug events seen in the hospital setting. Approximately 2.8% of all ADEs present on admission and 4.4% of ADEs that originated during a hospital stay were caused by a sedative or hypnotic drug.[23] A second study by AHRQ found that in 2011, the most common specifically identified causes of adverse drug events that originated during hospital stays in the U.S. were steroids, antibiotics, opiates/narcotics, and anticoagulants. Patients treated in urban teaching hospitals had higher rates of ADEs involving antibiotics and opiates/narcotics compared to those treated in urban nonteaching hospitals. Those treated in private, nonprofit hospitals had higher rates of most ADE causes compared to patients treated in public or private, for-profit hospitals.[24]

MRH is common after hospital discharge in older adults, but methodological inconsistencies between studies and a paucity of data on risk factors limits clear understanding of the epidemiology. There was a wide range in incidence, from 0.4% to 51.2% of participants, and 35% to 59% of harm was preventable. Medication related harm incidence within 30 days after discharge ranged from 167 to 500 events per 1,000 individuals discharged (17–51% of individuals).[25]

In the U.S., females had a higher rate of ADEs involving opiates and narcotics than males in 2011, while male patients had a higher rate of anticoagulant ADEs. Nearly 8 in 1,000 adults aged 65 years or older experienced one of the four most common ADEs (steroids, antibiotics, opiates/narcotics, and anticoagulants) during hospitalization.[24] A study showed that 48% of patients had an adverse drug reaction to at least one drug, and pharmacist involvement helps to pick up adverse drug reactions.[26]